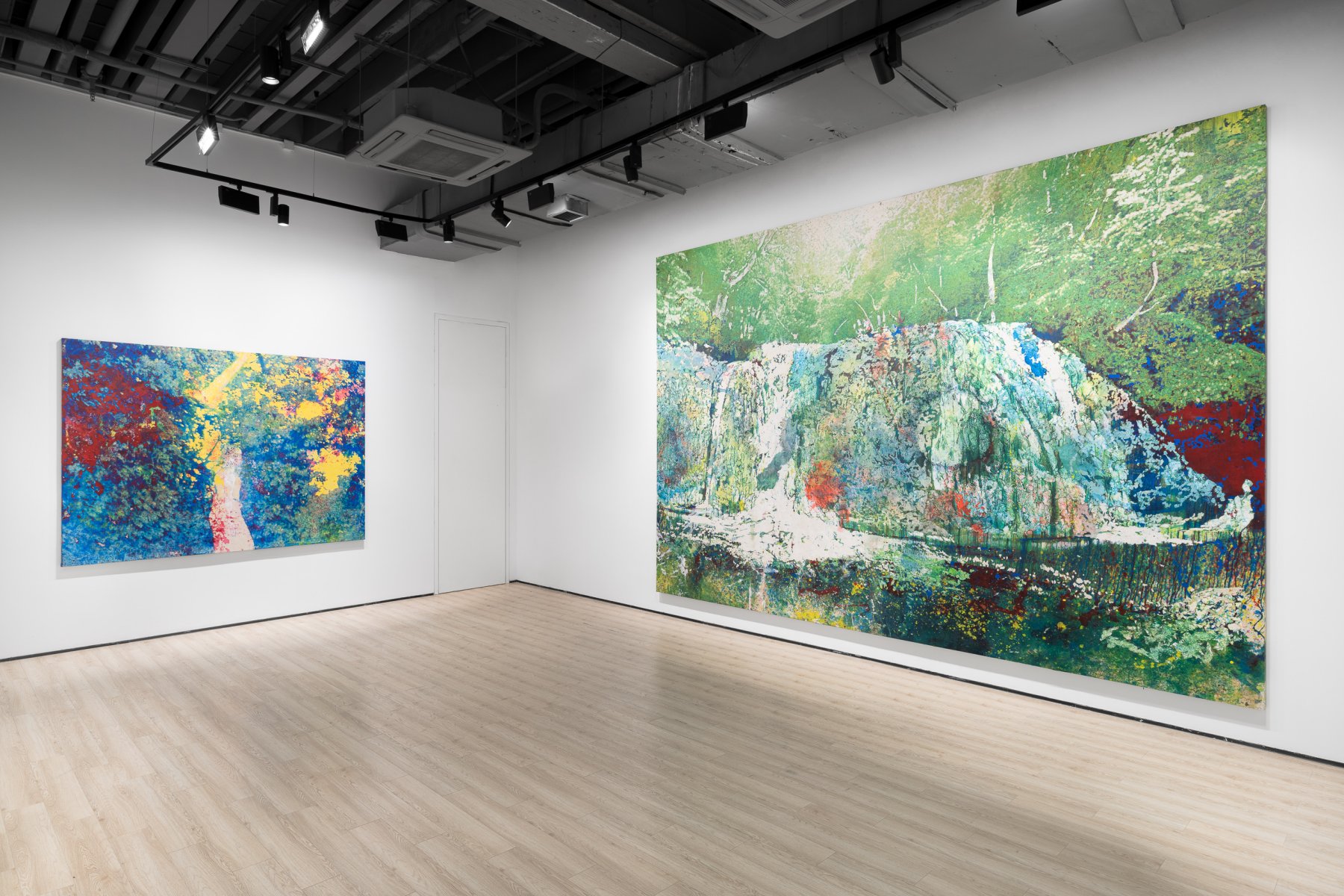 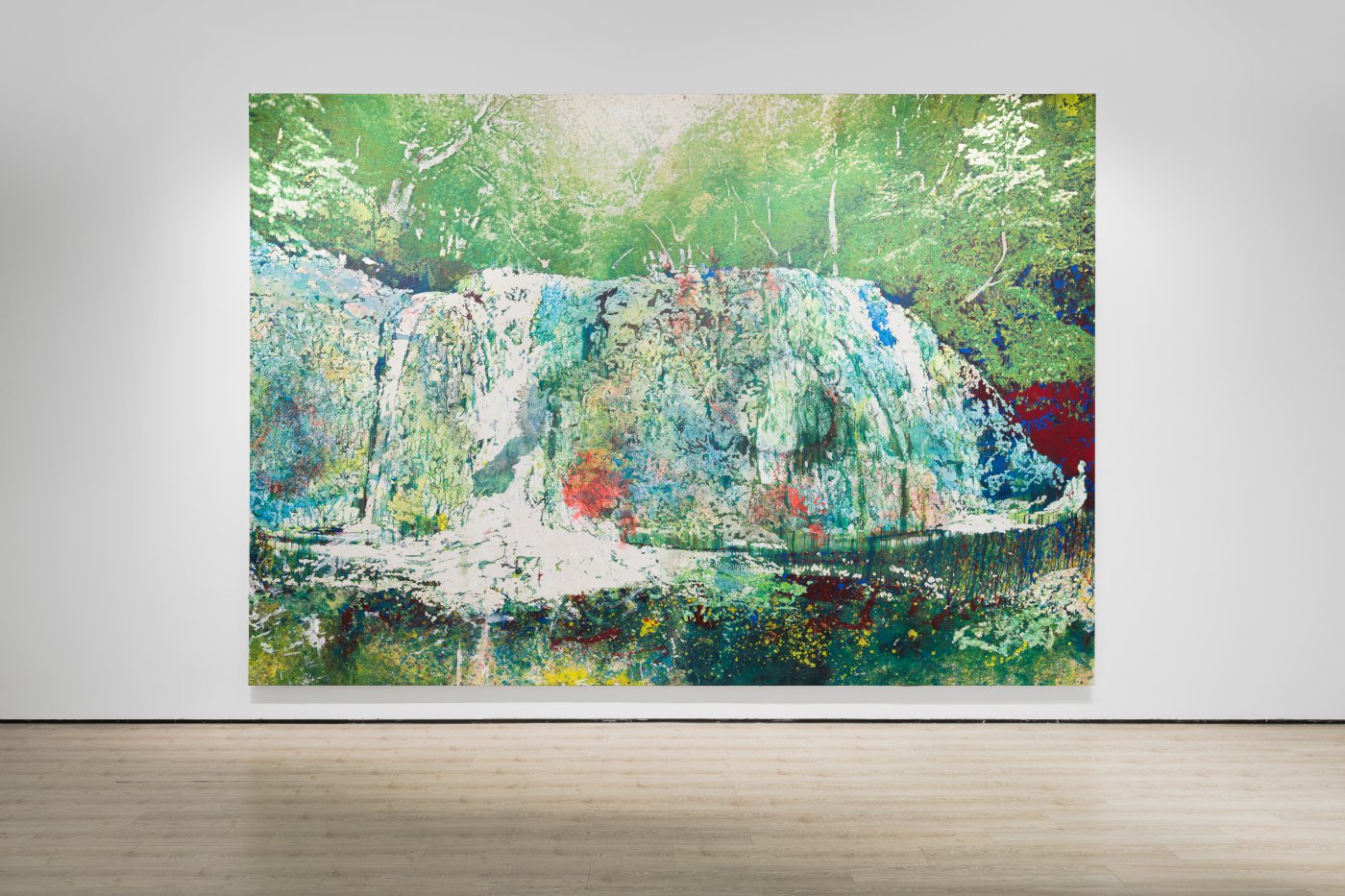 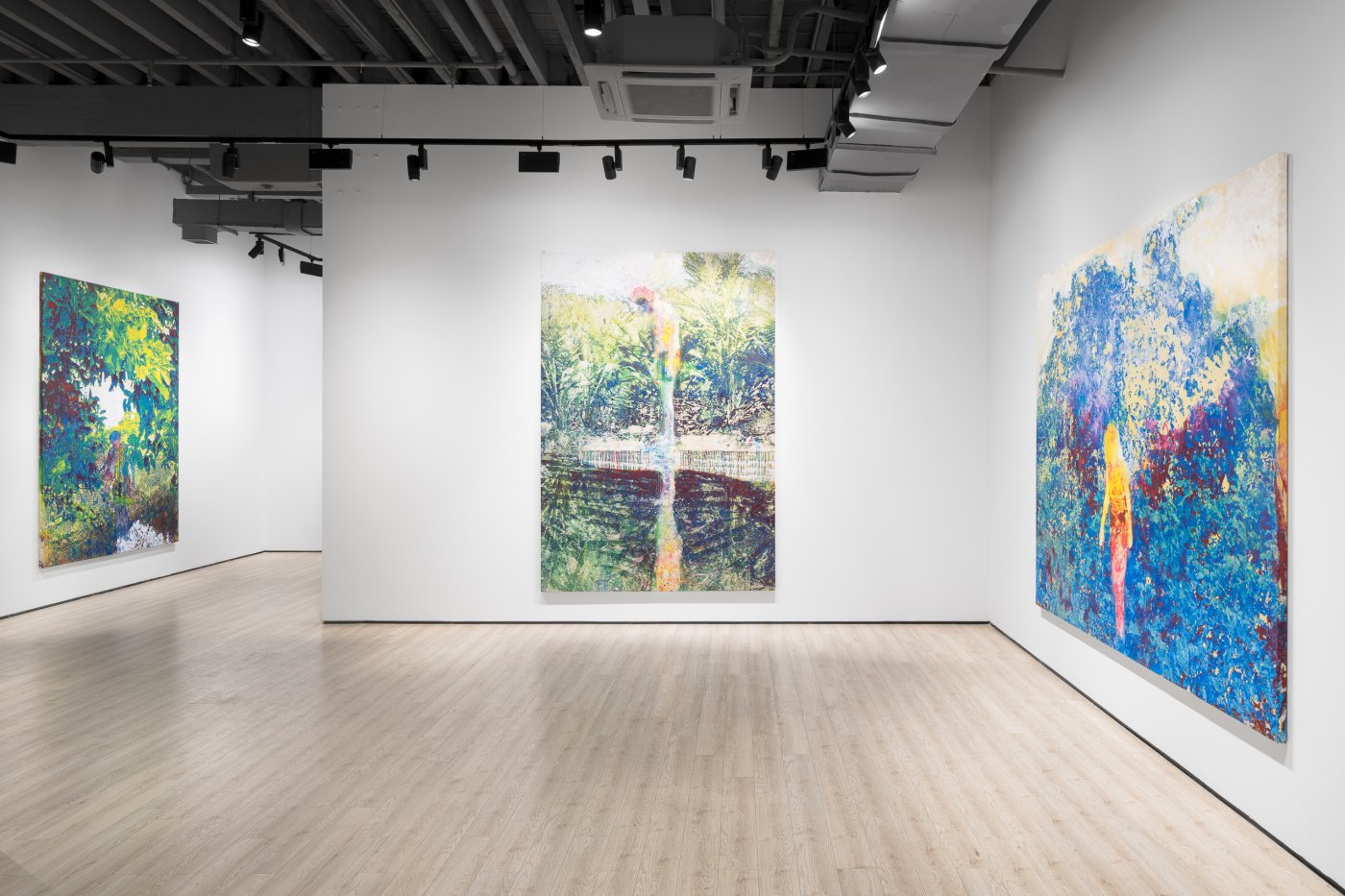 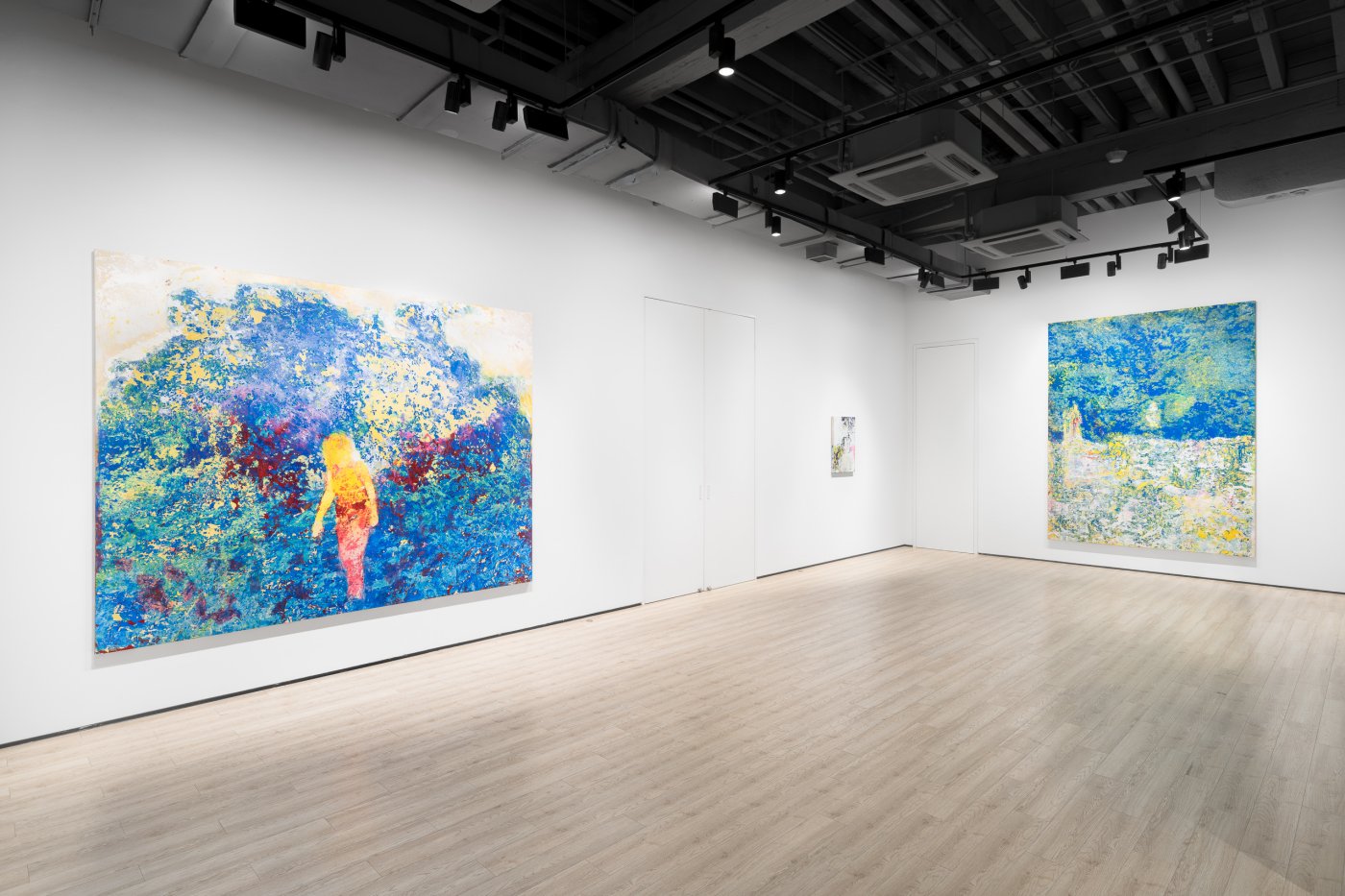 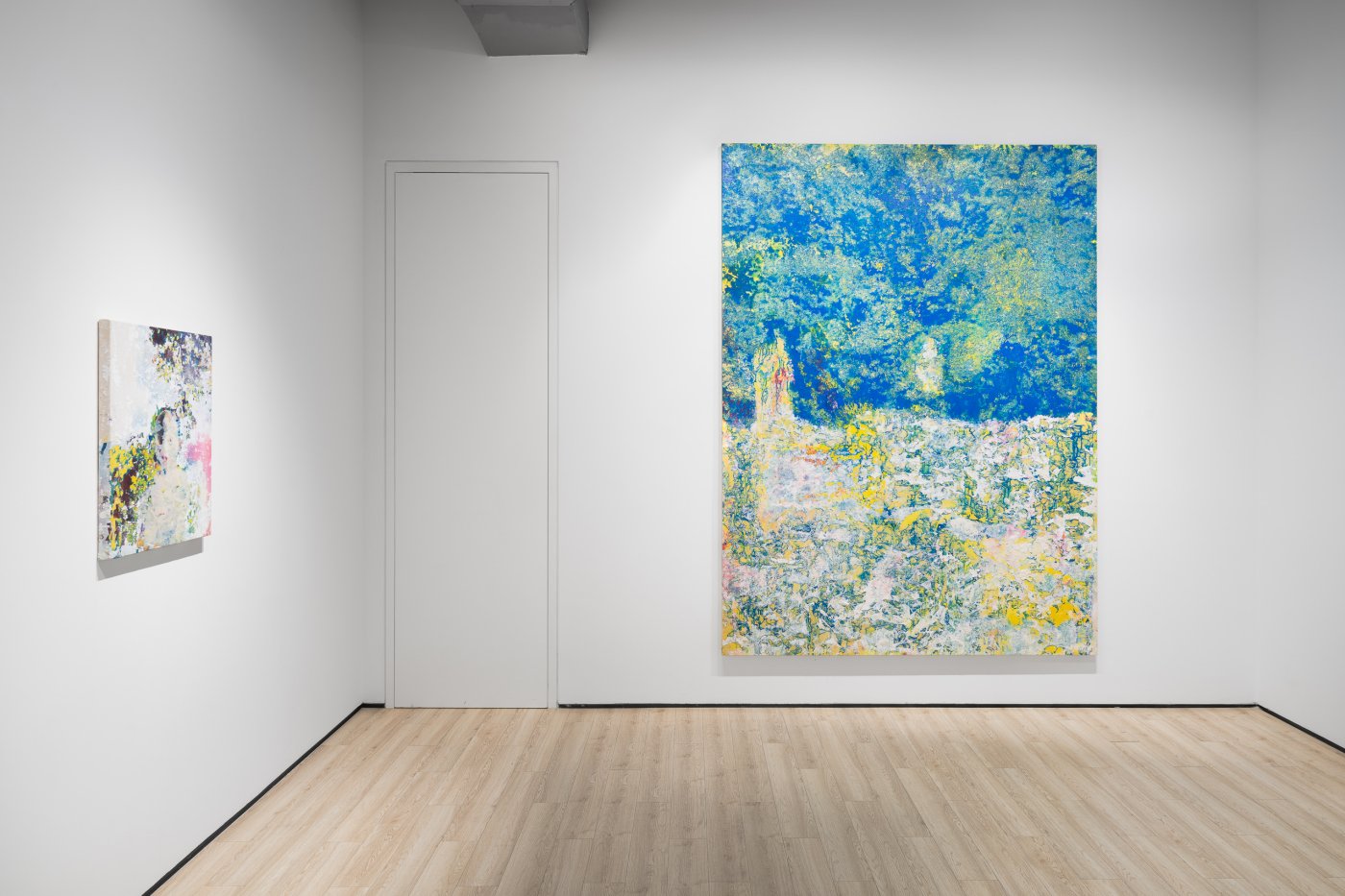 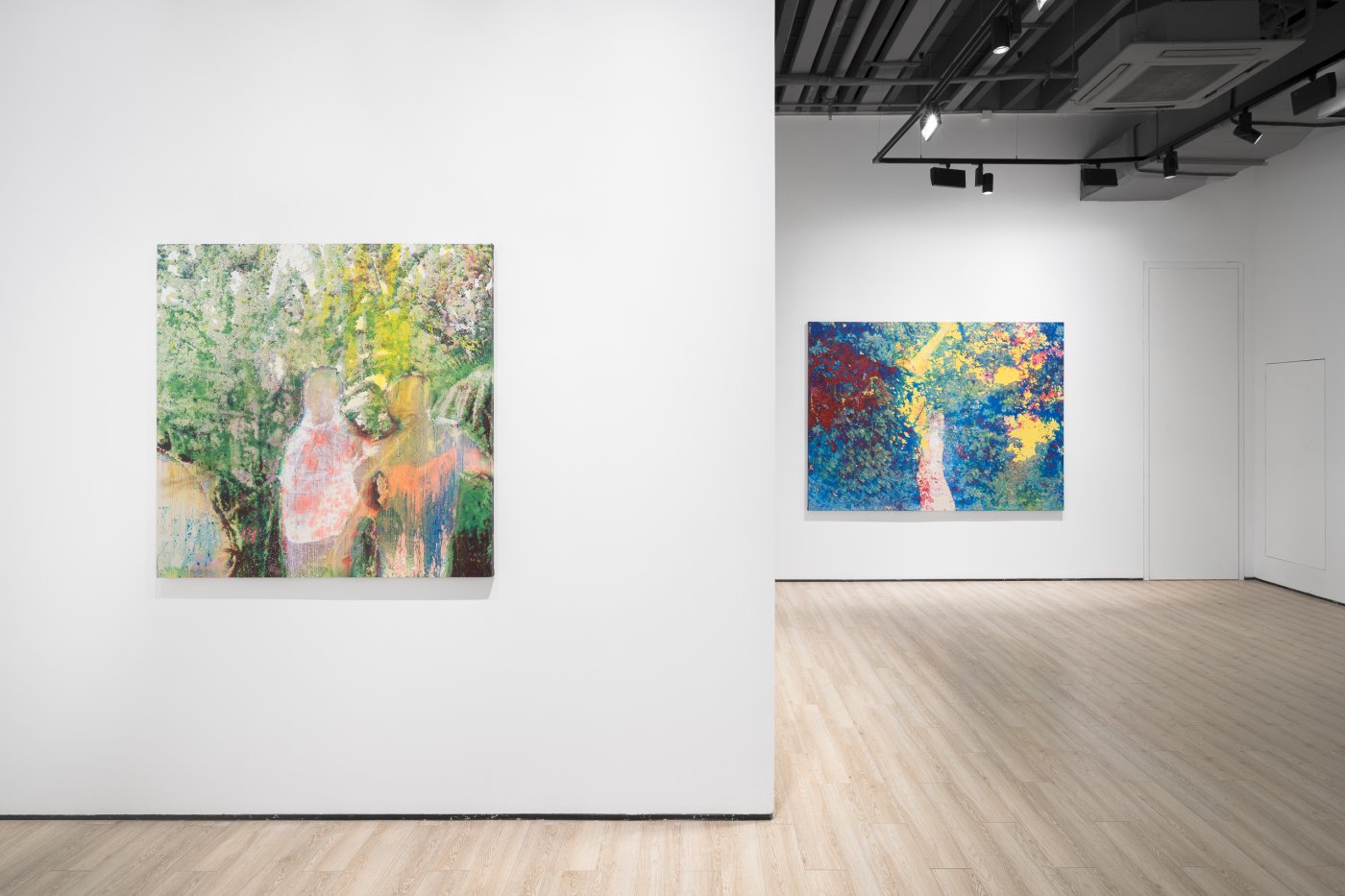 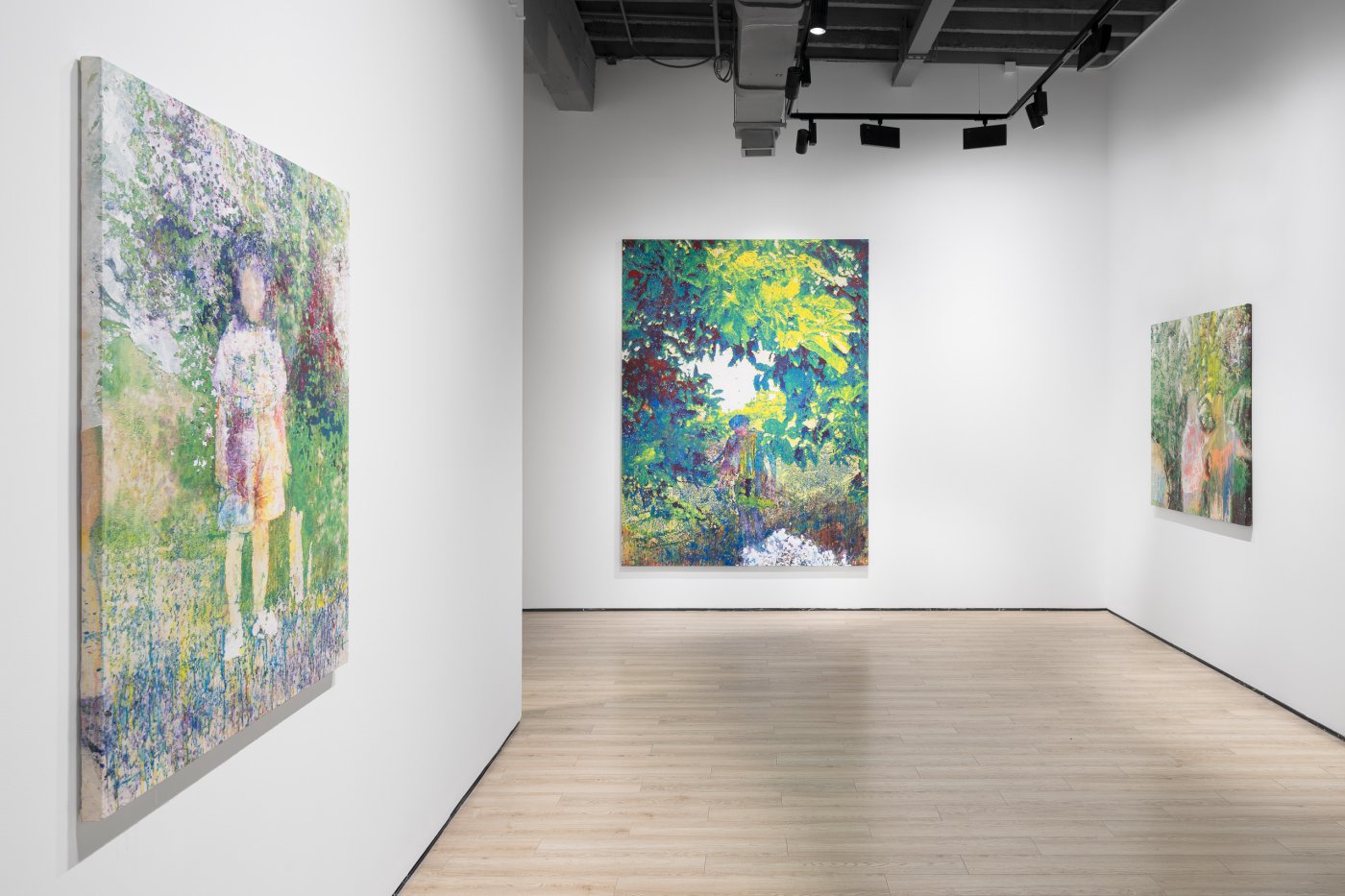 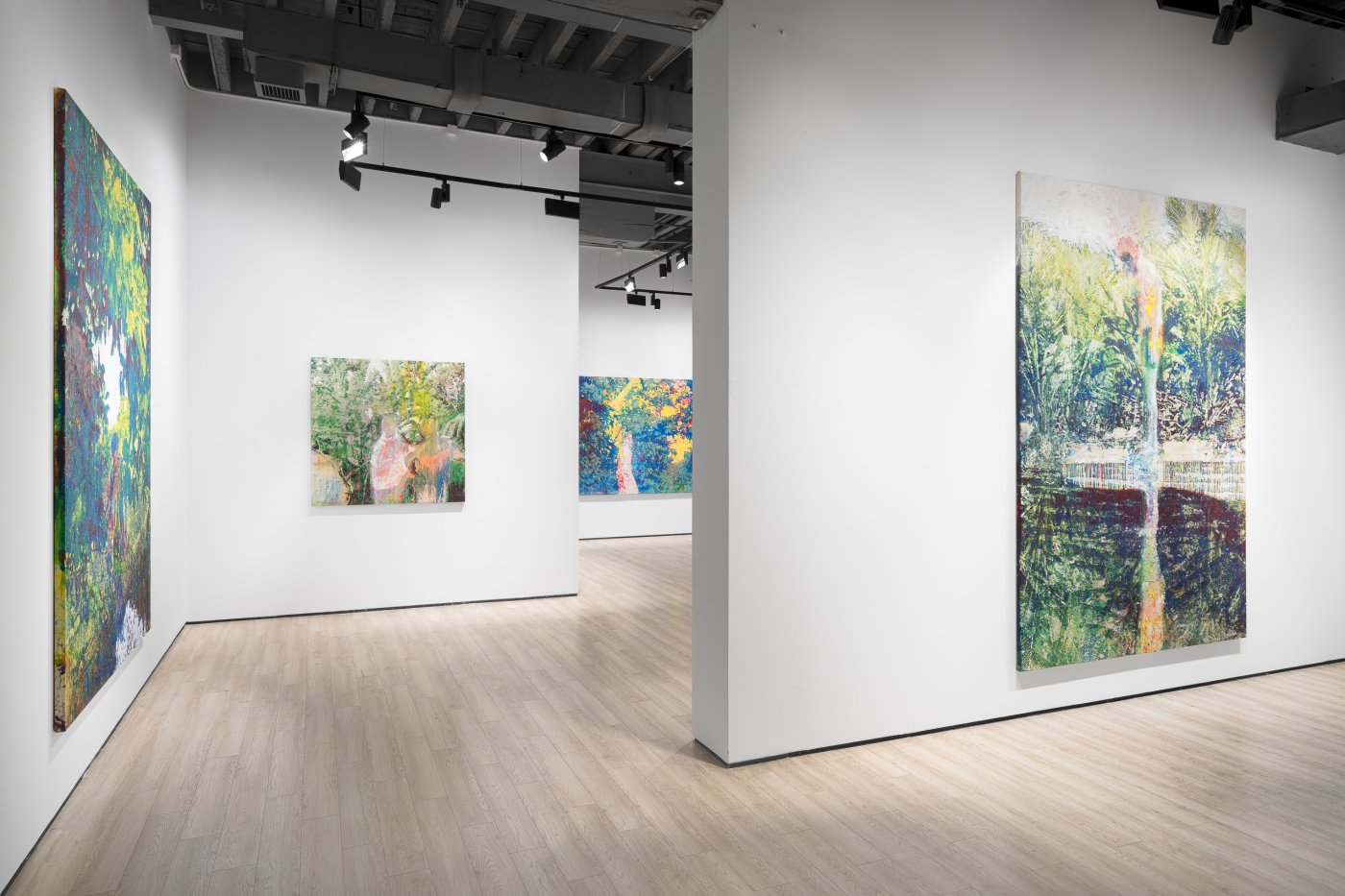 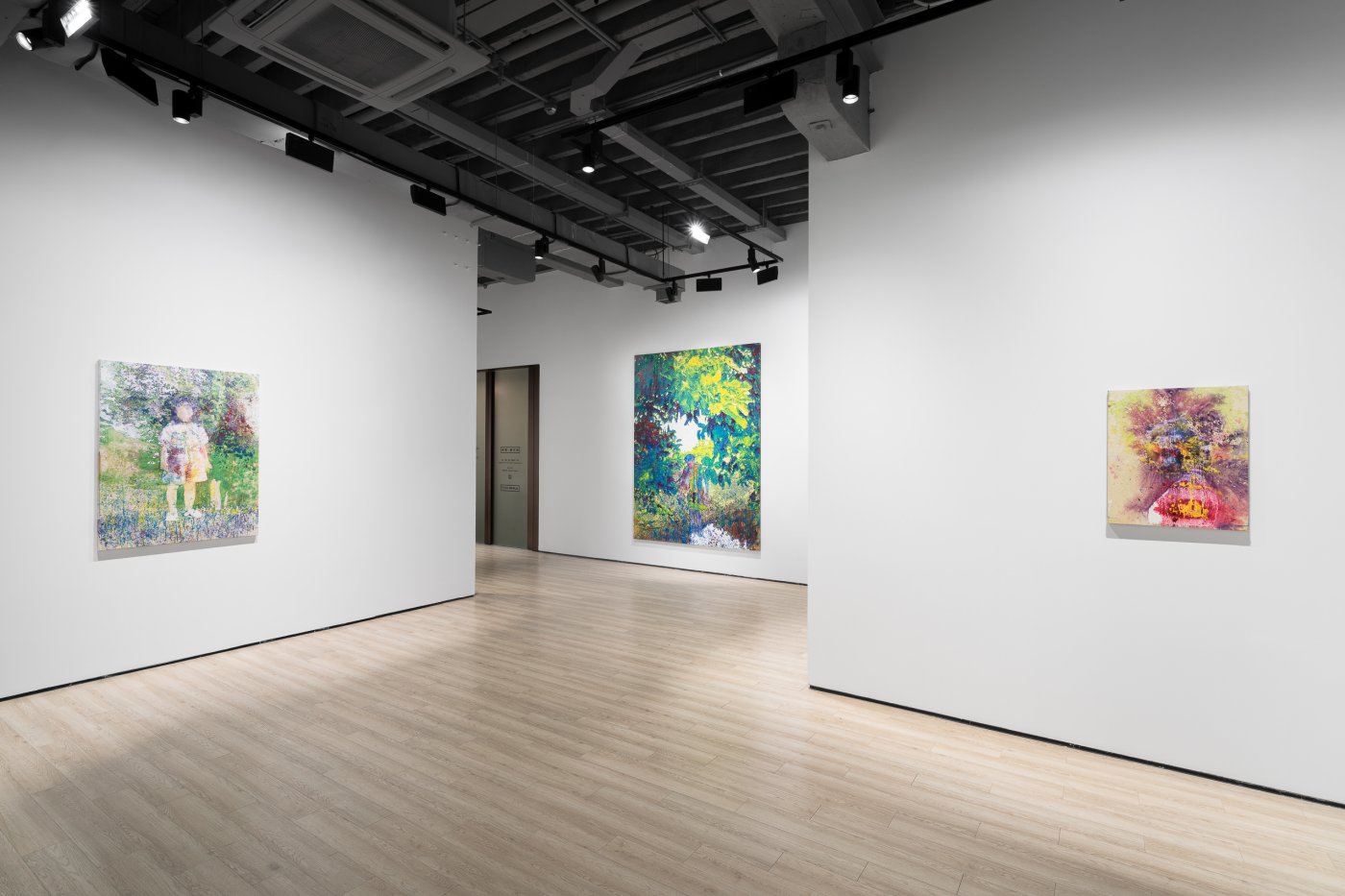 Most vivid is the smell, the volatile emanation of the moist tropical air, ascending amidst webs of exuberant vegetation. Confronting Alexandre Lenoir’s paintings is almost a ‘molecular affair’.[1] However, the activation of the olfactory through the visual, a quasi-synesthetic experience does not always occur in every ‘good’ picture depicting a tropical landscape. What’s at play here is not merely the imagery but also the materiality, embodied in the rugged terrain of the pictorial surface, through an impressively laborious and lengthy process in the artist’s studio.

Each of Lenoir’s paintings is the bearer of its own becoming. From afar and up close, one distinctly sees the piecemeal traces, left through the addition and subtraction of thousands of pieces of masking tapes, as well as holes, marks, and stains–remains from the application of dozens or hundreds of coats of paint, front and back. These strenuous and attentive tasks require the support of three to eight assistants, which is an integral part of the process and highly valued by the artist. In addition, Lenoir has also been working with engineers to develop robotic structures to realize even more ambitious projects. The concept of working inside the studio and with people is essential for him. It is crucial to tame one’s muse and inspiration, and to train one’s attention and creativity through rigidity and collectivity.

Such working procedures are loaded up and brought to light not only in a confined space (the studio), but also, rather remarkably, in darkness. The artist projects an existing photograph, most of the time retouched through Photoshop beforehand, to establish the basic structure of a picture. Dimness and enclosure oblige him to “constantly reveal himself and examine his own depth”.[2] It is the same for his paintings; Lenoir’s techniques, such as covering and tearing, application and cancellation, and pushing paint through the back of the canvas emphasize the unpredictability of the outcome. It is up to the canvas to manifest itself and be discovered. The canvas inhales in the undertaking of loaded operations in the dark, challenging the limit of its own bearing. Excess must be exhaled, breaking through any blackness. Lenoir stands up to himself, to his strength, vitality and vigor, so that the invisible manifests itself, whether it be a perceptual experience of another sensory pathway other than the optical, or something that most will recollect by looking his paintings: a memory.

The allusion to memory derives largely from the revelation of the contours of a central haunting figure, deprived of any bodily details and discernible identities. They usually appear from colossal shades of natural colors, such as forests and waterfalls. Lenoir admits that indeed, most of the figures are himself. The idea of ‘self-portrait’ here is however not so much autobiographical than universal. In the absence of clues for identification, each apparition is both the artist himself and someone else. Lenoir often describes his life-sized paintings as doors, granting access for the viewer to project oneself into the works and to be fixed in one’s individual temporality.

Consequently, if there are indeed non-representational renderings in the picture, it is neither a stylistic nor formalistic choice. It is memory’s nature of obscurity and fuzziness that conditions the artistic expression through ostensibly ‘abstract’ techniques. Lenoir does not represent or abstract anything. In comparing the end picture with the original, one would look in vain for any similarities except compositional ones. The intent is for something shapeless to incarnate from within a structure. Lenoir’s paintings refuse a simplified or formalist-aesthetic reading. As the artist himself rightfully says, his paintings are about ‘incarnation’.