Six months away from his career-sweeping retrospective at The Solomon R. Guggenheim Museum in New York opening October 2022, Alex Katz is a towering figure in contemporary art, internationally recognised for his singular ability to distill disparate elements of the culture – from the gestural power of abstract painting and Modernist poetry to the bold colours of mid-century cinema and advertising – into vibrant depictions of modern life. On display for the first time here, the Birds series (2020–present) represents a new leap into near-pure abstraction with striking avian subject matter, inspired by the chipping sparrows (‘chippies’) seen pecking in the snow outside the artist’s window. 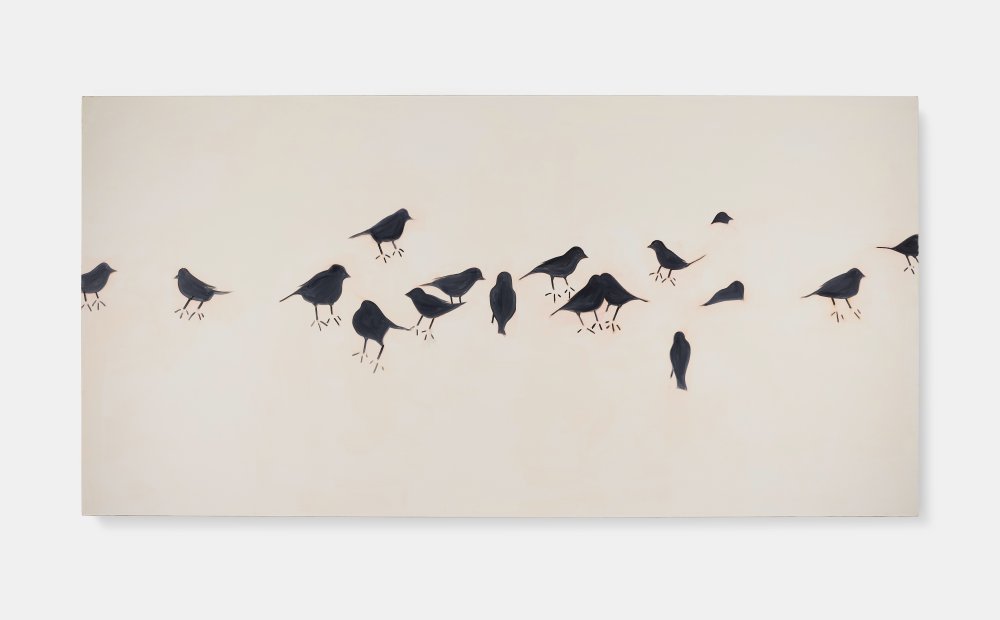 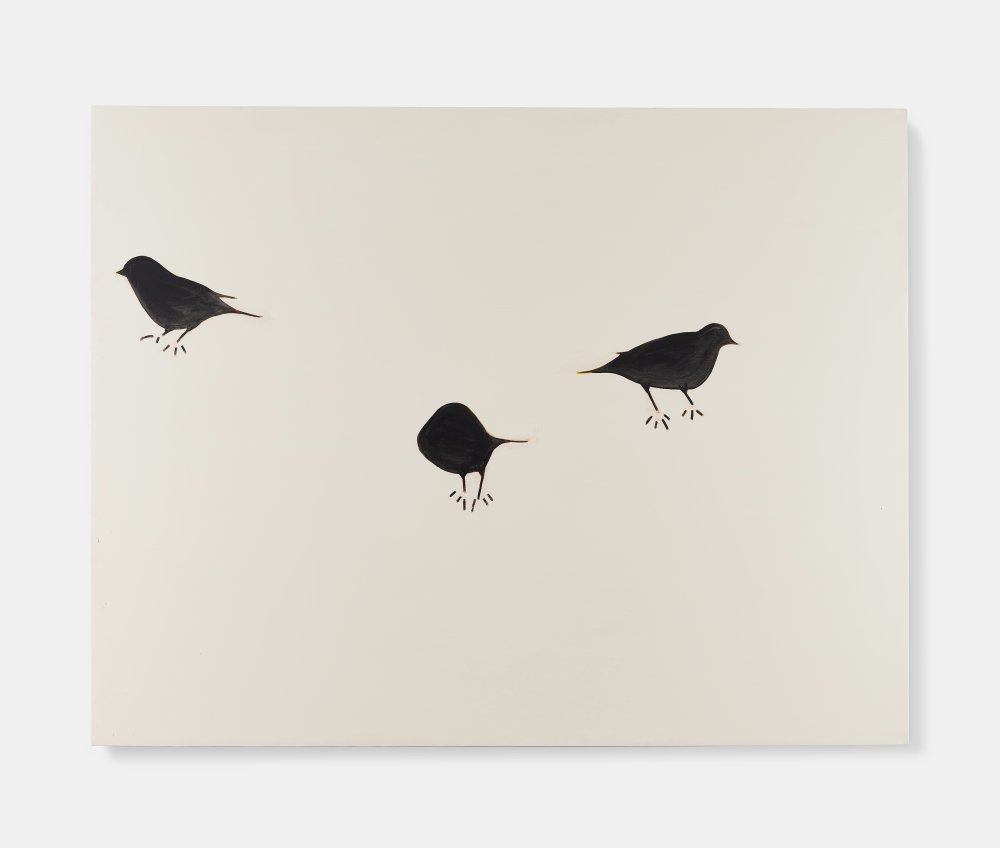 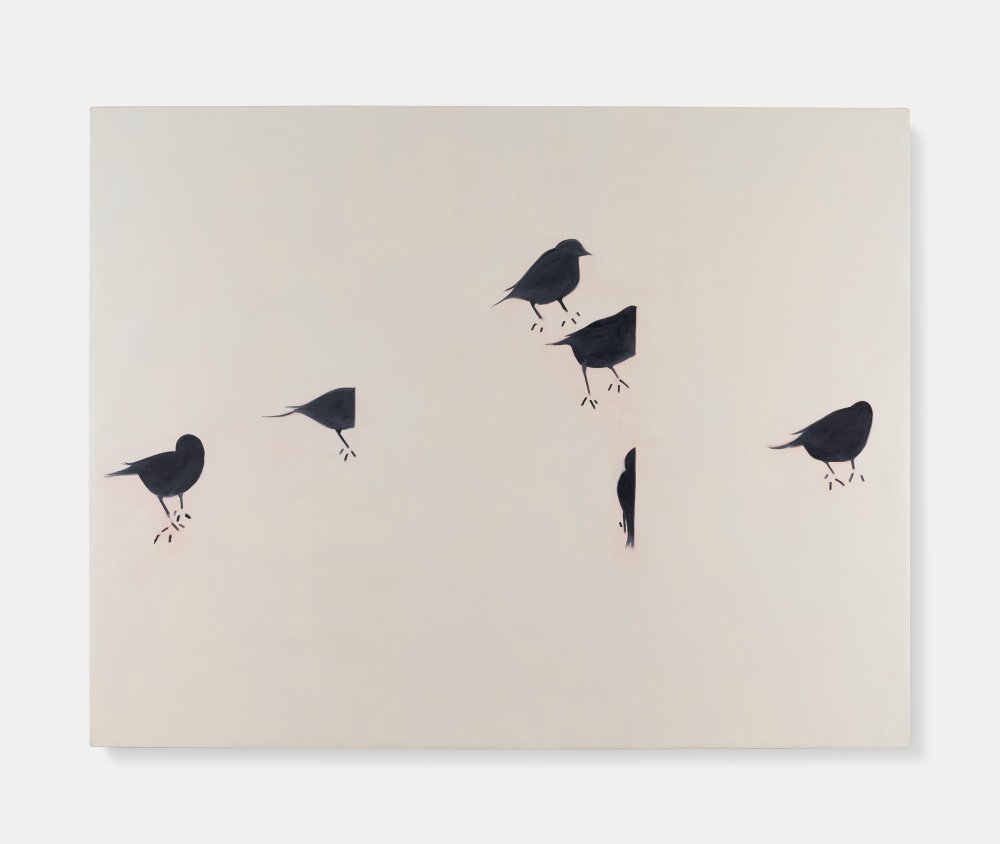 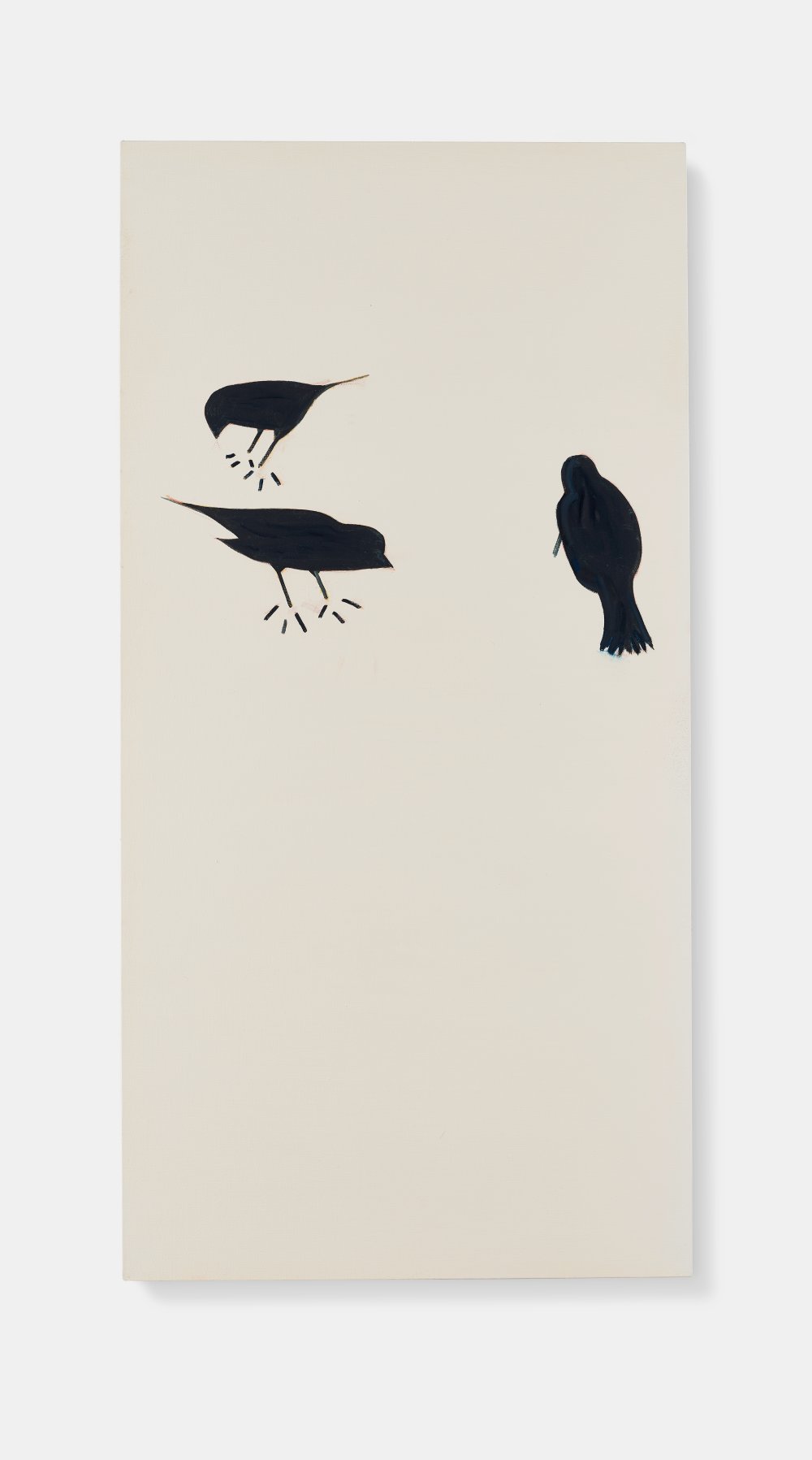 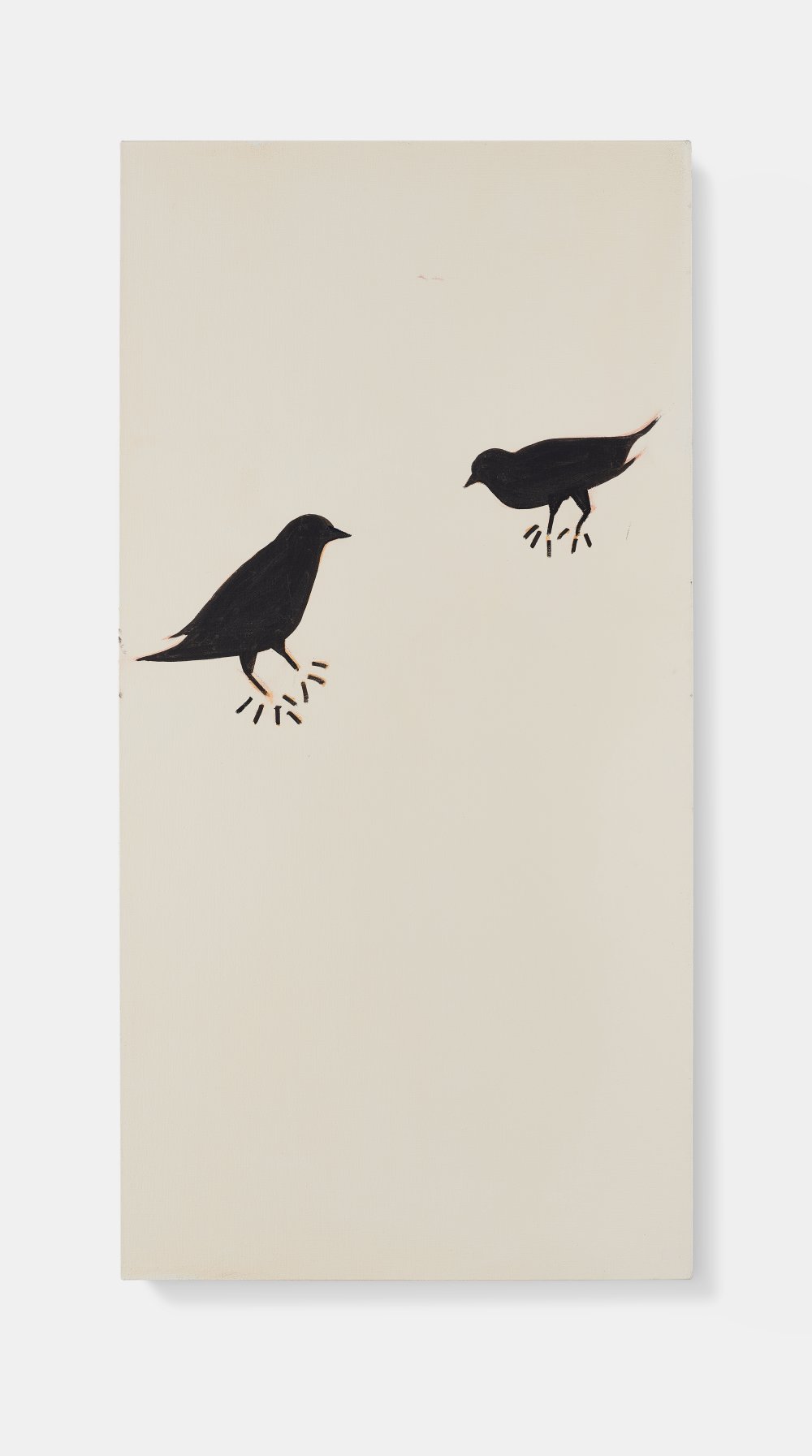 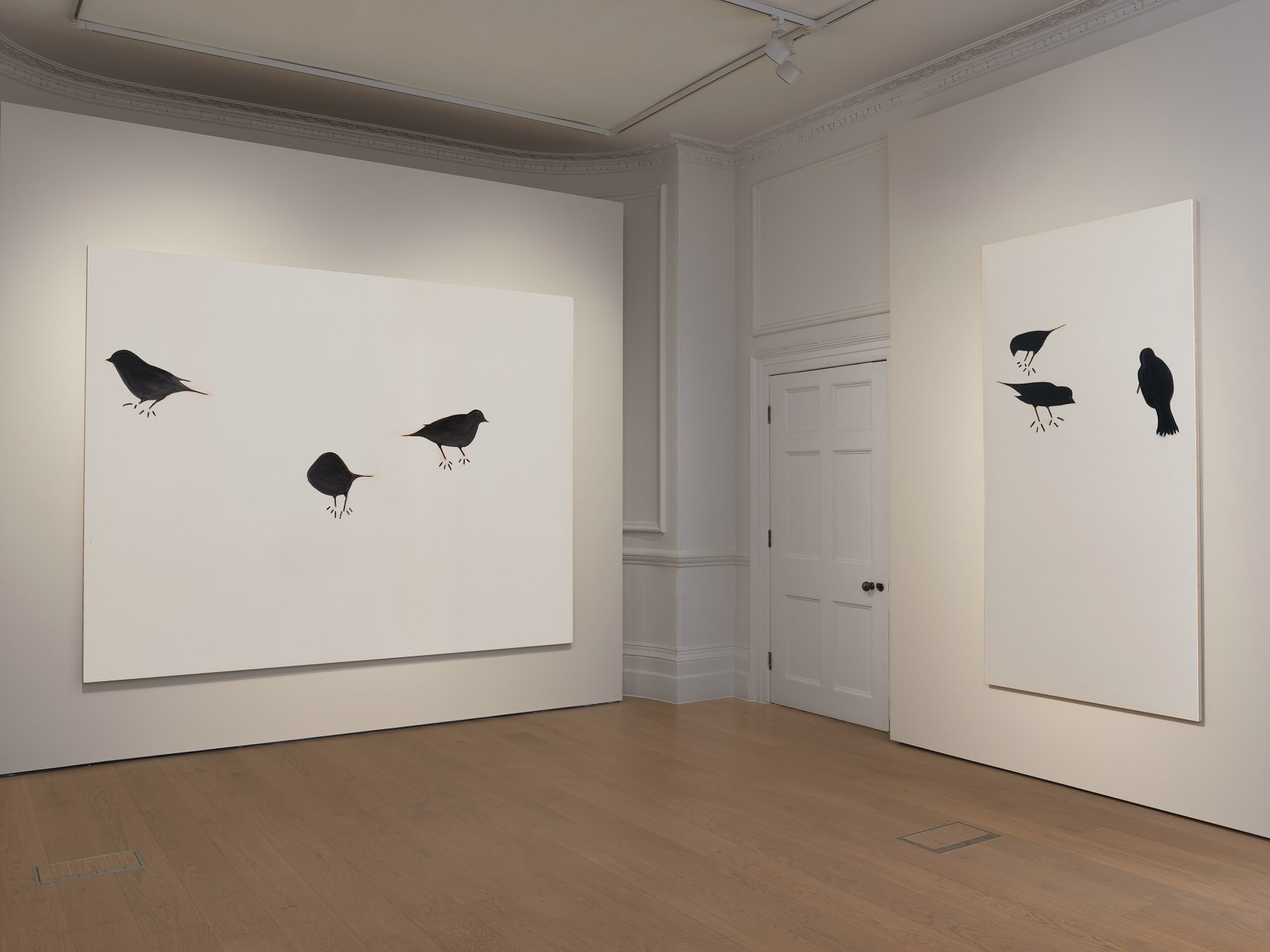 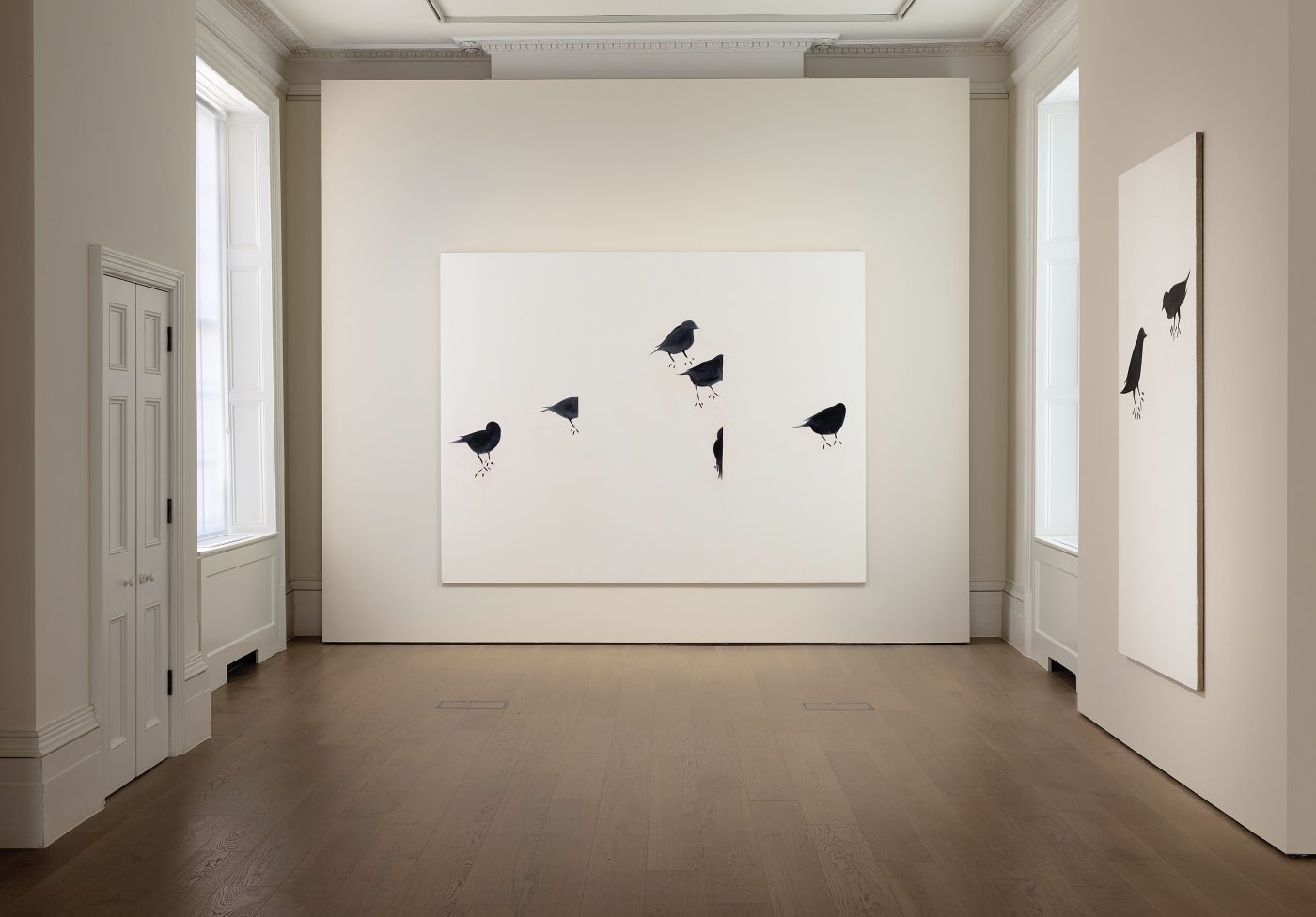 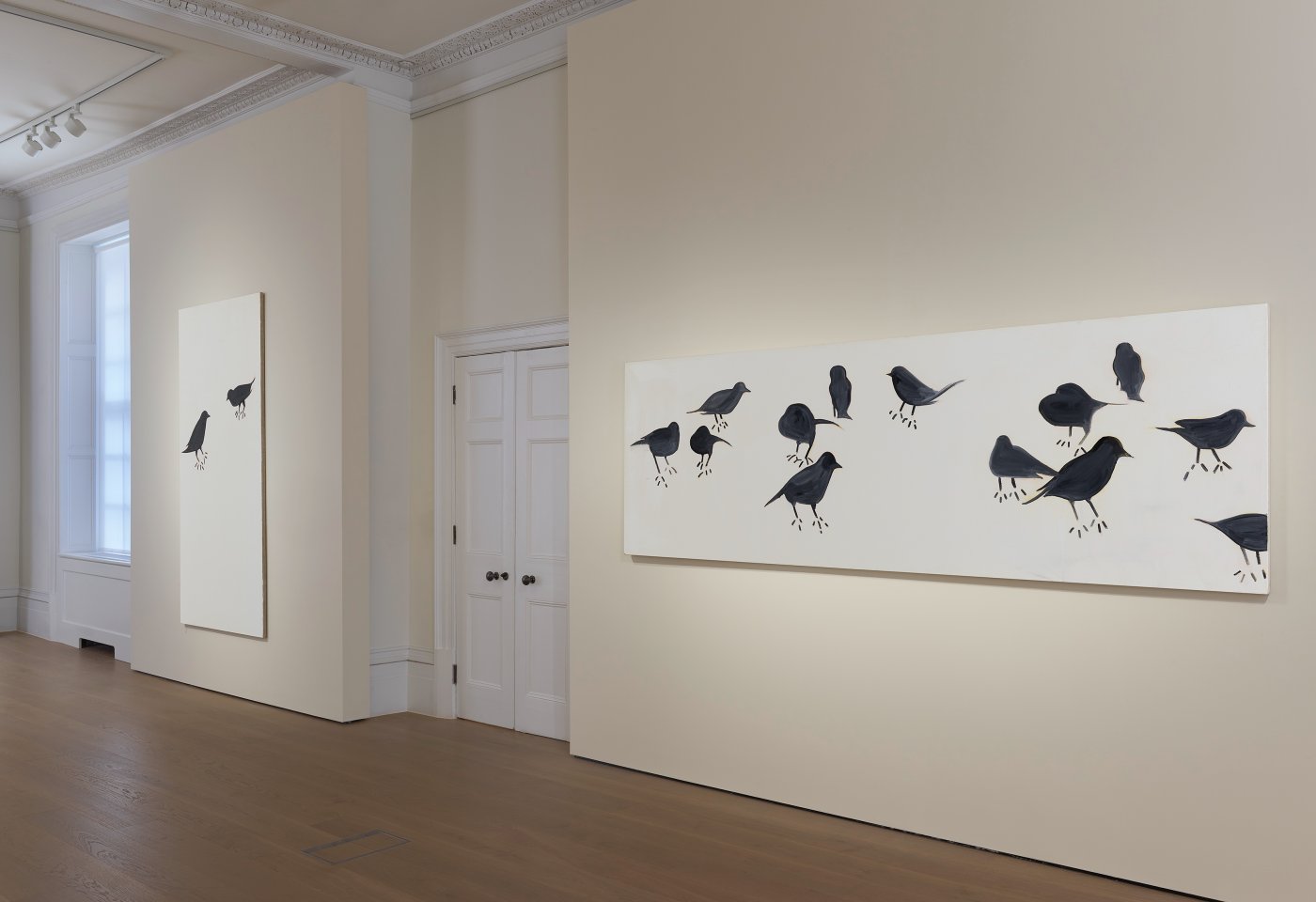 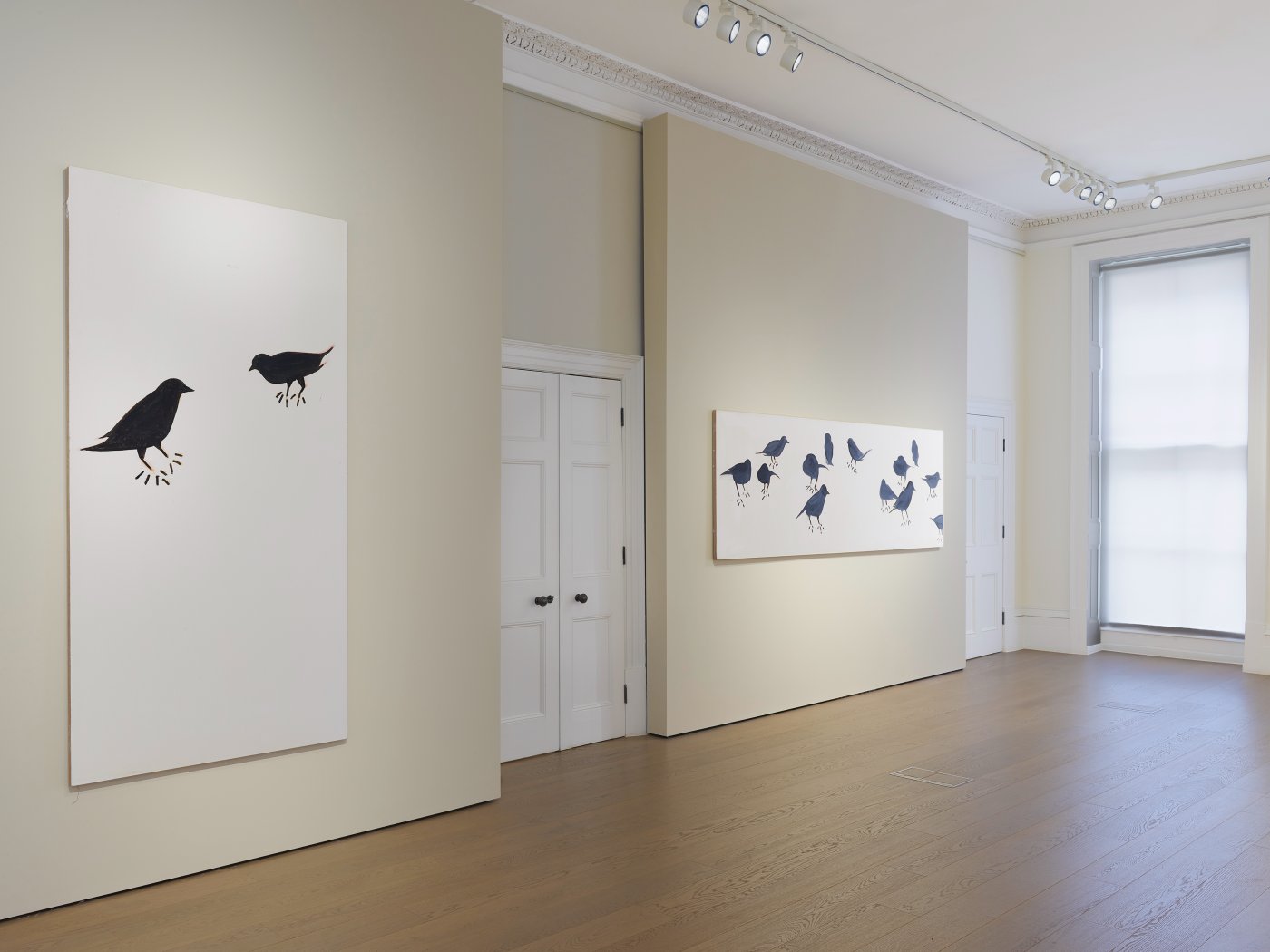 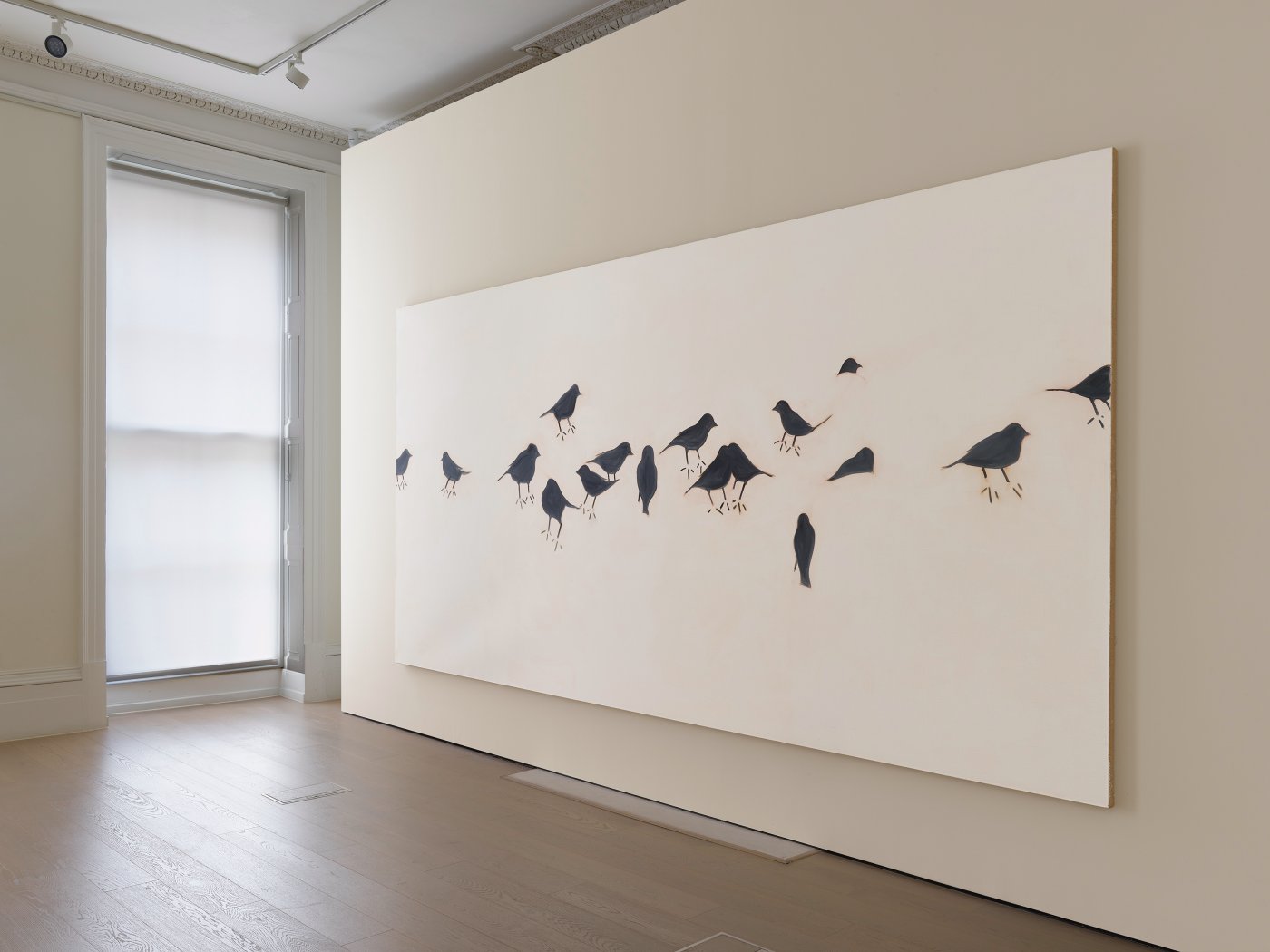 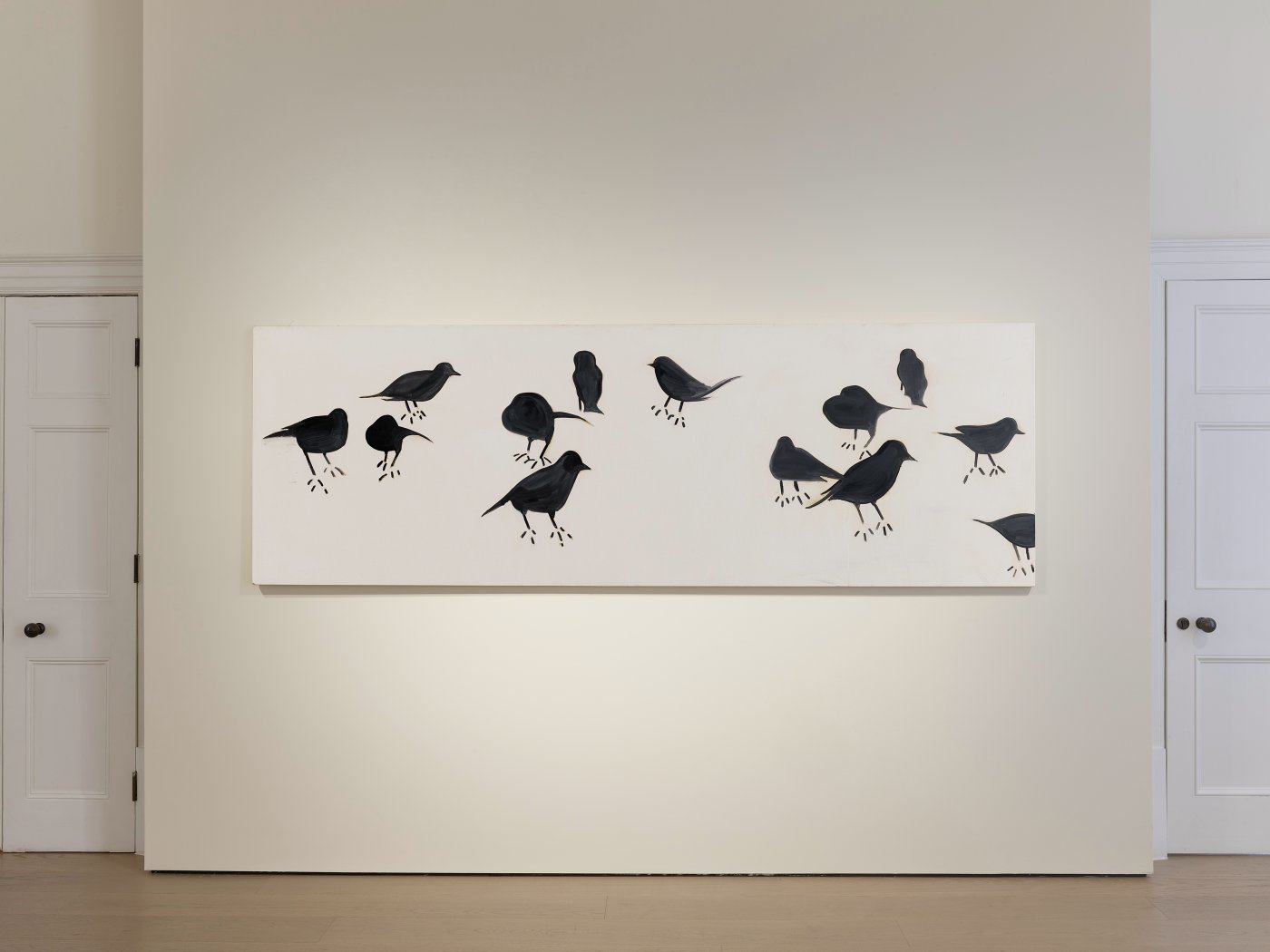 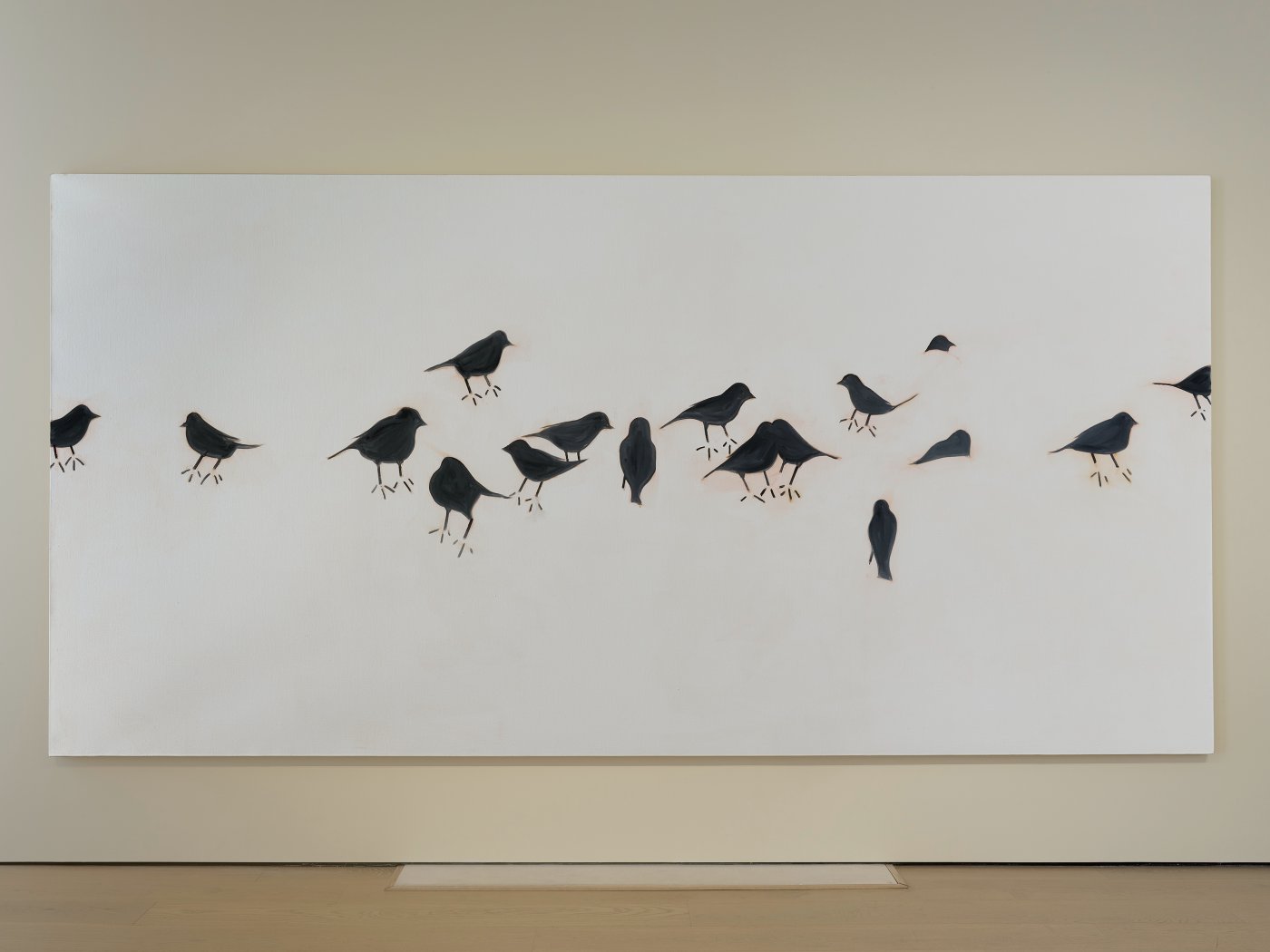 Stark and minimal, they are both meditative and disquieting, drawing on the millennium-old art of Japanese scroll painting and the Minimalist exploration of negative space as well as Alfred Hitchcock’s iconic 1962 noir, The Birds.

Describing their delicate, curving bodies in calligraphic black strokes, Katz makes us see the birds in as few marks as possible, testing the capability of the human mind to fill in the blanks with the ease of a master painter. The birds hop around on tiny feet sketched out in rapid lines, leaning towards an invisible ground to peck with their beaks or peer up at the sky; a quality true to the real species of North American chipping sparrows, who nest low to the ground and rarely take flight. Though Katz has painted landscapes for over six decades, dating back to his artists’ residency at The Skowhegan School of Painting as a student in Maine in the late 1940s, his oeuvre has rarely encompassed animal subject matter. Here, the birds exert the same pull of gravity as his human subjects often do, filling the canvas against a sea of creamy white negative space that recalls the exploration of emptiness in white paintings by the abstractionist Robert Ryman, in whose paintings the appearance of effortlessness likewise veiled a precise compositional blueprint and skill.

The electric sense of tension and movement in these compositions is related to Hitchcock’s eerie shots of spectral birds high in a lead-white sky, yet while Hitchcock’s ominous masses of black birds relayed impending danger to his audience, here the birds’ small black bodies evoke a subtle grace and harmony resonant of Japanese Edo period paintings. Several of the paintings in the exhibition are long and horizontal in scale, a format often used by Katz in portraiture which refers to the tradition of painted screens seen in East Asian decorative arts. In their succinct perfection the paintings capture all at once a flicker of movement, a creeping tension, and the animal beauty of a foraging sparrow. In Katz’s words, they embody the essence of his painterly philosophy: ‘Eternity exists in the immediate present,’ he explains. ‘There is no future, no past. Just now.’