Alex Israel: Always On My Mind

Alex Israel: Always On My Mind

Sometimes, rather than deciding which context to address with a specific body of work or project, I just think of myself as my context . . . and that’s where my Self-Portrait comes into play. It has become a kind of logo for this imagined context of me—and it hopefully provides a through line as my work shifts or twists across traditionally segregated worlds or value systems.
—Alex Israel

Gagosian presents Always On My Mind, an exhibition of new Self-Portraits by Alex Israel. This is his first solo exhibition in the United Kingdom.

A native of Los Angeles, Israel mines the cultural mythos of his hometown with polished optimism and calculated cool, melding nostalgic feelings with lucid perceptions of California living and the American Dream.

Israel has cultivated a close partnership with Warner Bros. Studios, beginning in 2010 when he rented Hollywood props from the studio’s warehouses and exhibited them as readymade sculptures. He has also collaborated with the studio’s scenic painting department on numerous large-scale series, including his dreamy, pastel-tinted Sky Backdrops, architecturally inspired Flats, and slick, vibrant Waves. The film industry has continued to play a central role in Israel’s work; in 2017, he made his directorial debut with SPF-18, a feature-length teen rom-com that pays tribute to classic surf movies.

Since 2012, Israel has hosted As it Lays, a DIY online talk show featuring Los Angeles–based celebrity guests. In its debut season, each episode opened with a title sequence in which Israel’s silhouette—decked out in sunglasses by Freeway Eyewear, the brand he founded in 2010—morphs into a color-blocked logo. By 2013, this video graphic had already developed into Israel’s Self-Portraits, a series of paintings on shaped fiberglass panels featuring crisp lines and bright gradients of color. The Self-Portraits are both a consciously self-branded signature made for the Instagram era and a deeper formal exploration into Southern California’s aesthetic history.

Recently, Israel has shifted the series toward photorealism, in addition to developing an increasingly introspective and self-referential approach toward the art of self-portraiture. In 2015, he presented a group of new Self-Portraits as part of his site-specific installation at the Huntington in San Marino, California. One painting shows him writing his signature across the back of another Self-Portrait; another depicts his hands as he takes a selfie—an endless visual loop that conflates artist and viewer.

In Always On My Mind, Israel addresses the effortless visual gloss that twenty-first-century image culture and social media demand of their participants. A seamless “establishing shot” of Mulholland Drive is stitched together from multiple aerial photographs; a panorama of Griffith Park is foregrounded by a young woman who is engrossed not by the sweeping view before her, but by the picture of it that she has just taken with her iPhone.

In other works, the original color-blocked portrait is rebranded in trompe l’oeil formats including a glowing neon sign to a stained glass window. The Self-Portraits examine the myth of the American West and an expanded idea of entertainment—two parallel narratives interwoven in the fabric of Israel’s hometown that also continue to inflect our culture at large. 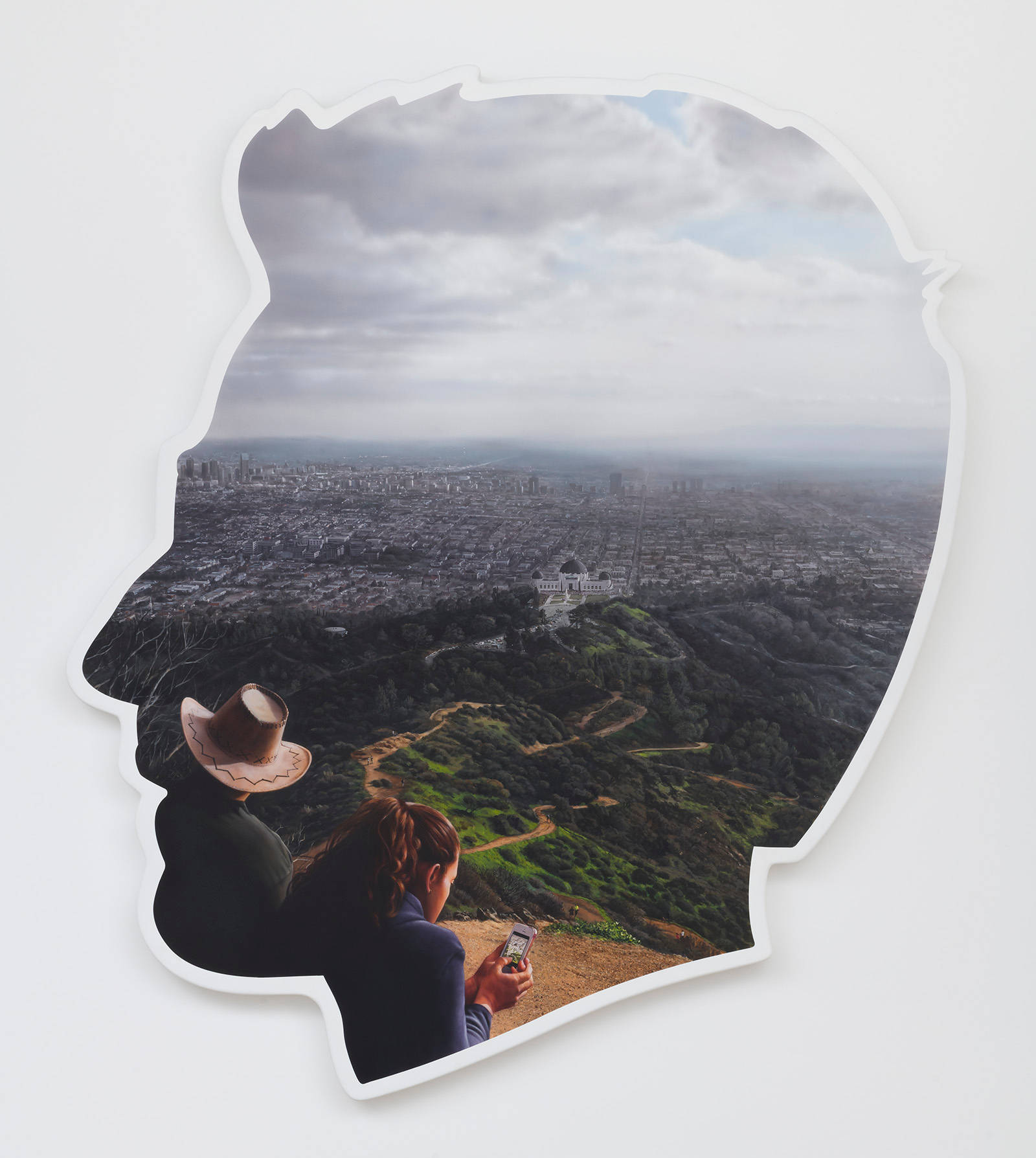