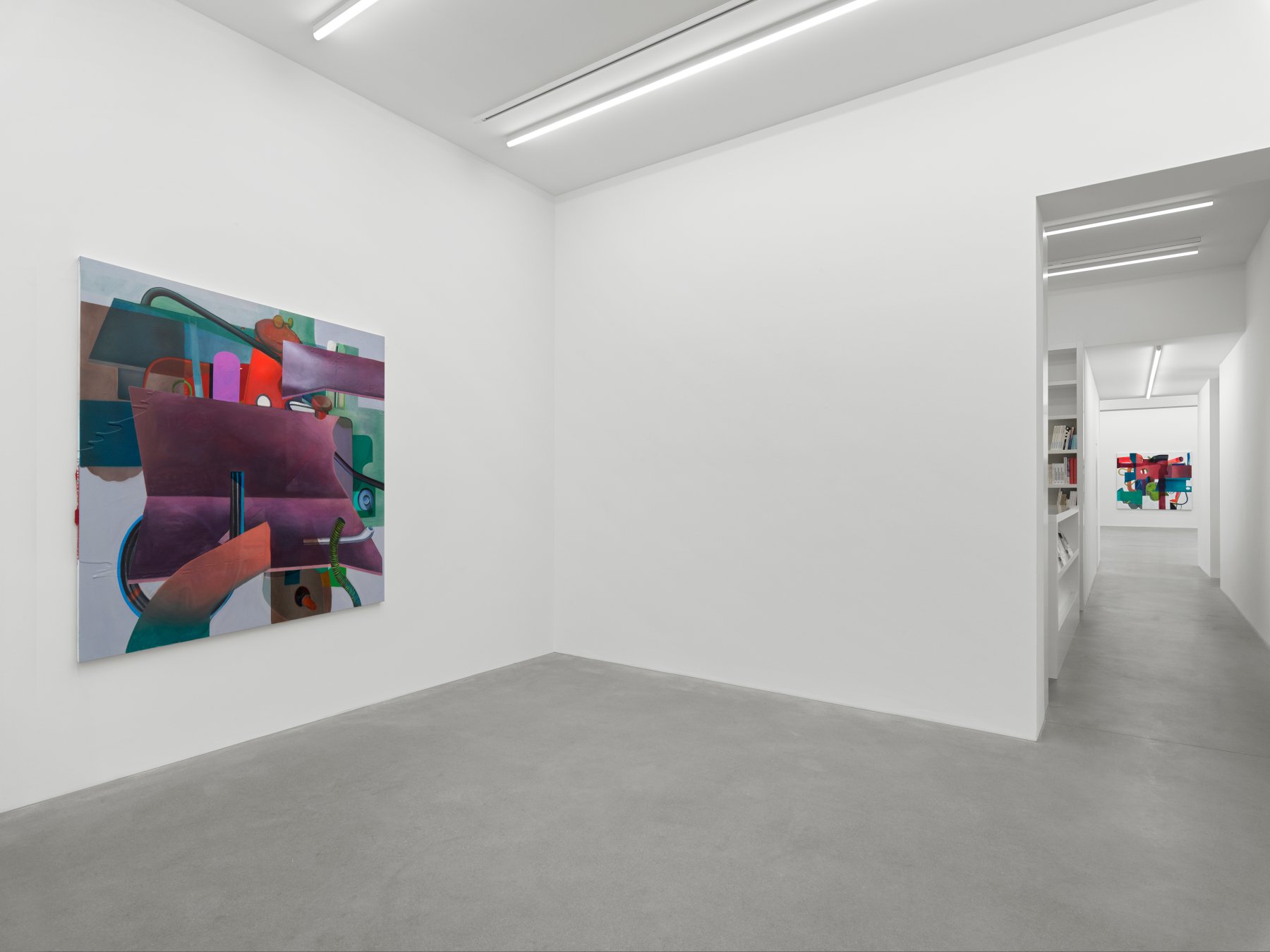 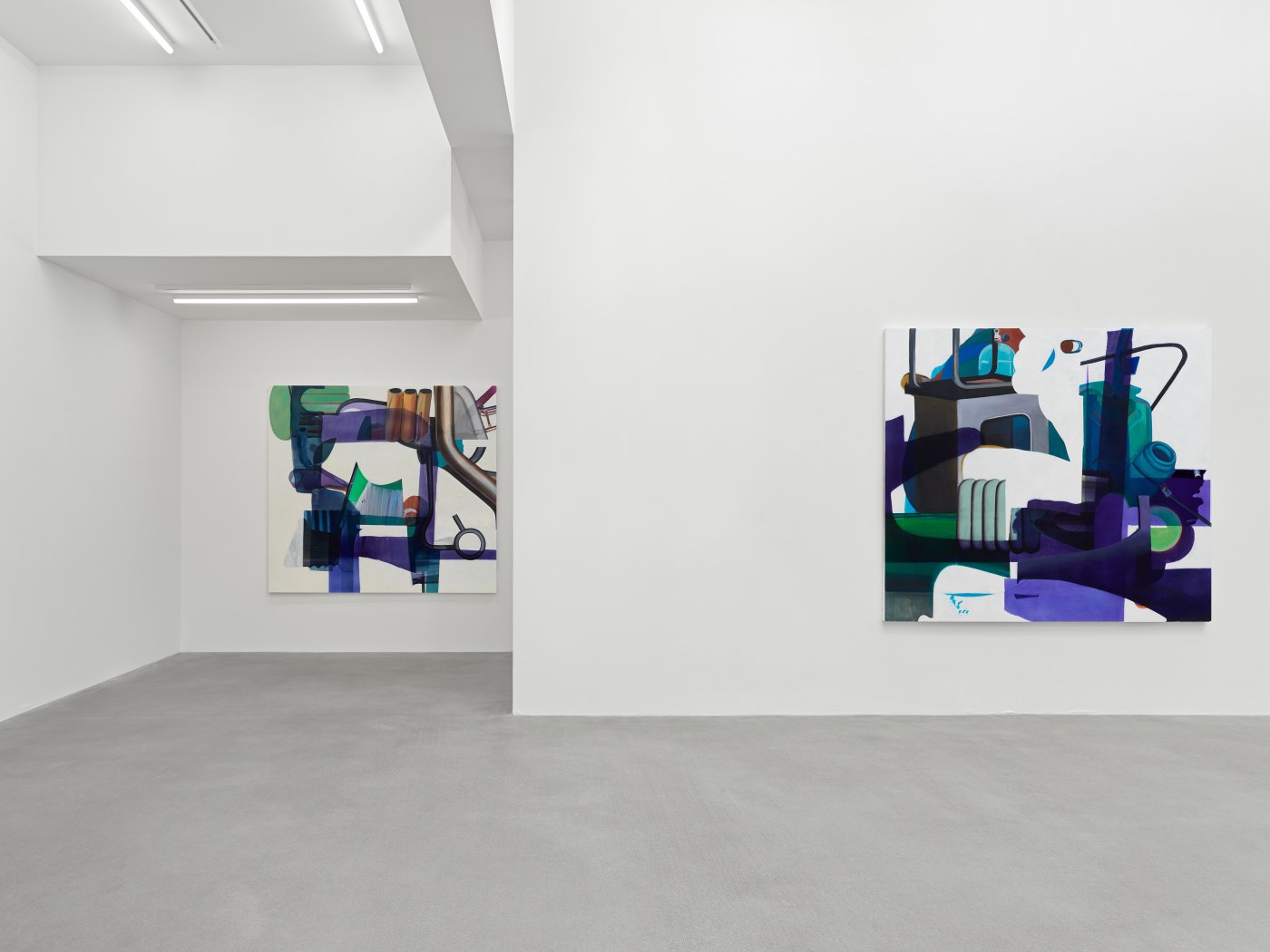 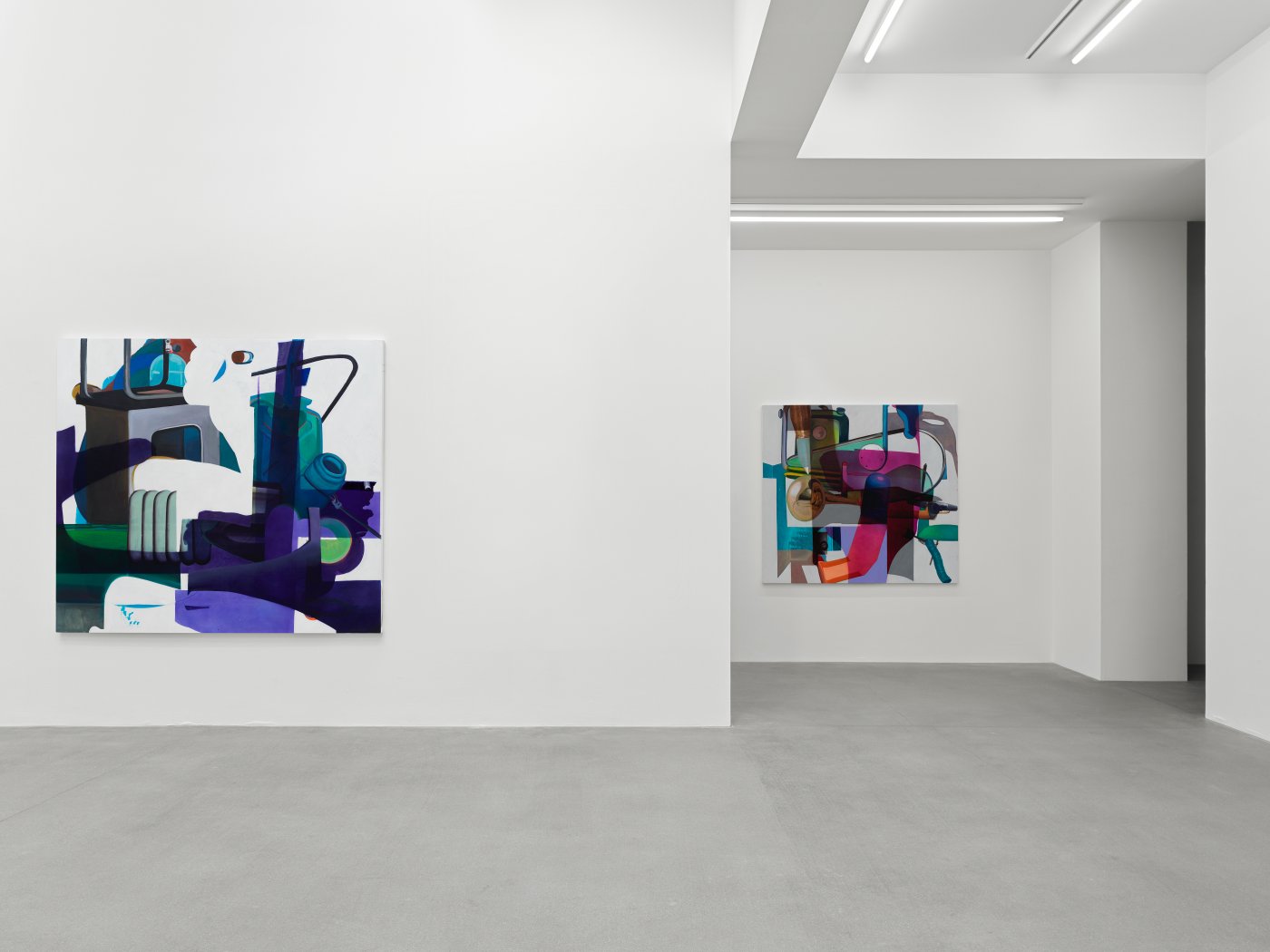 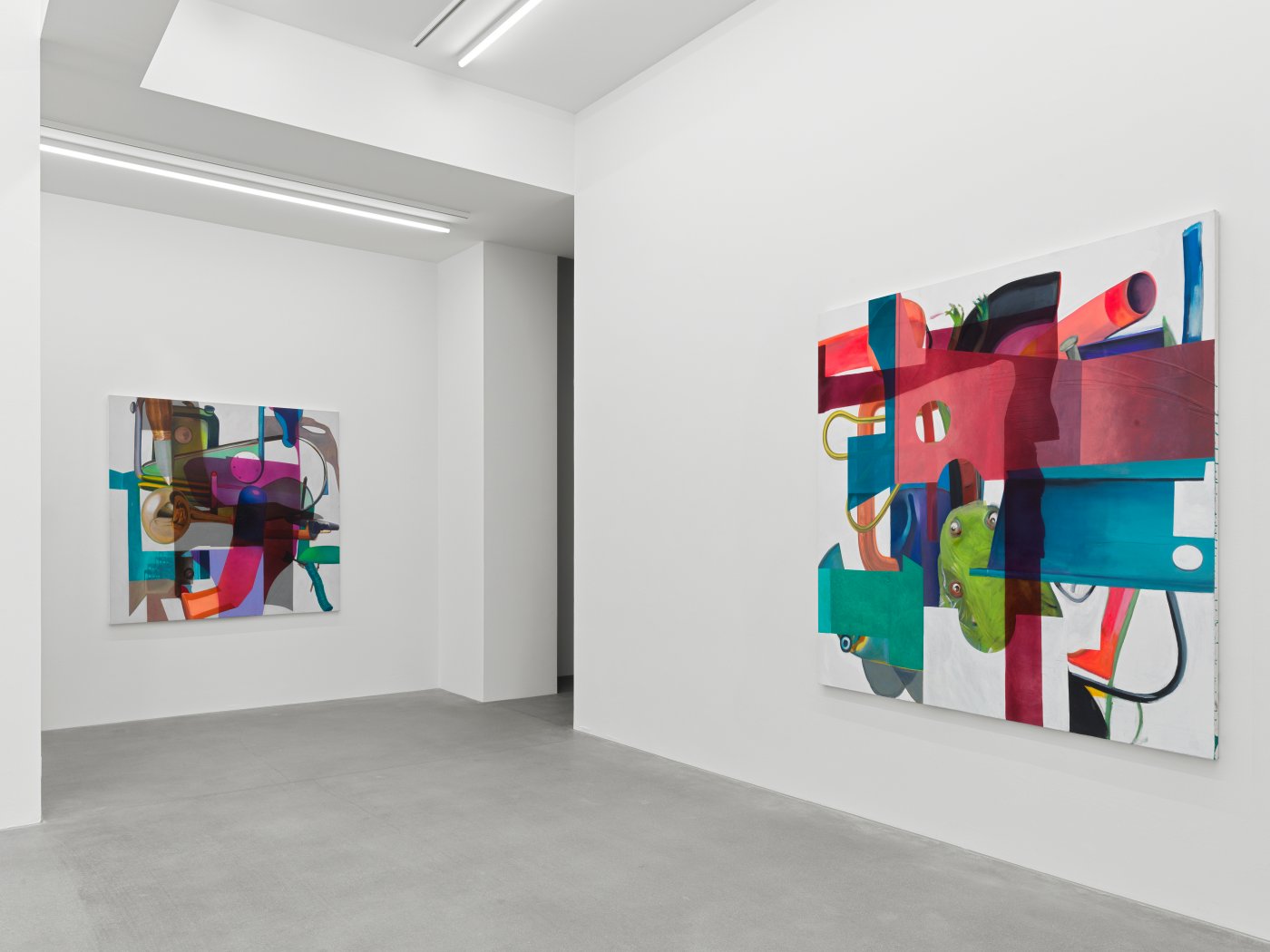 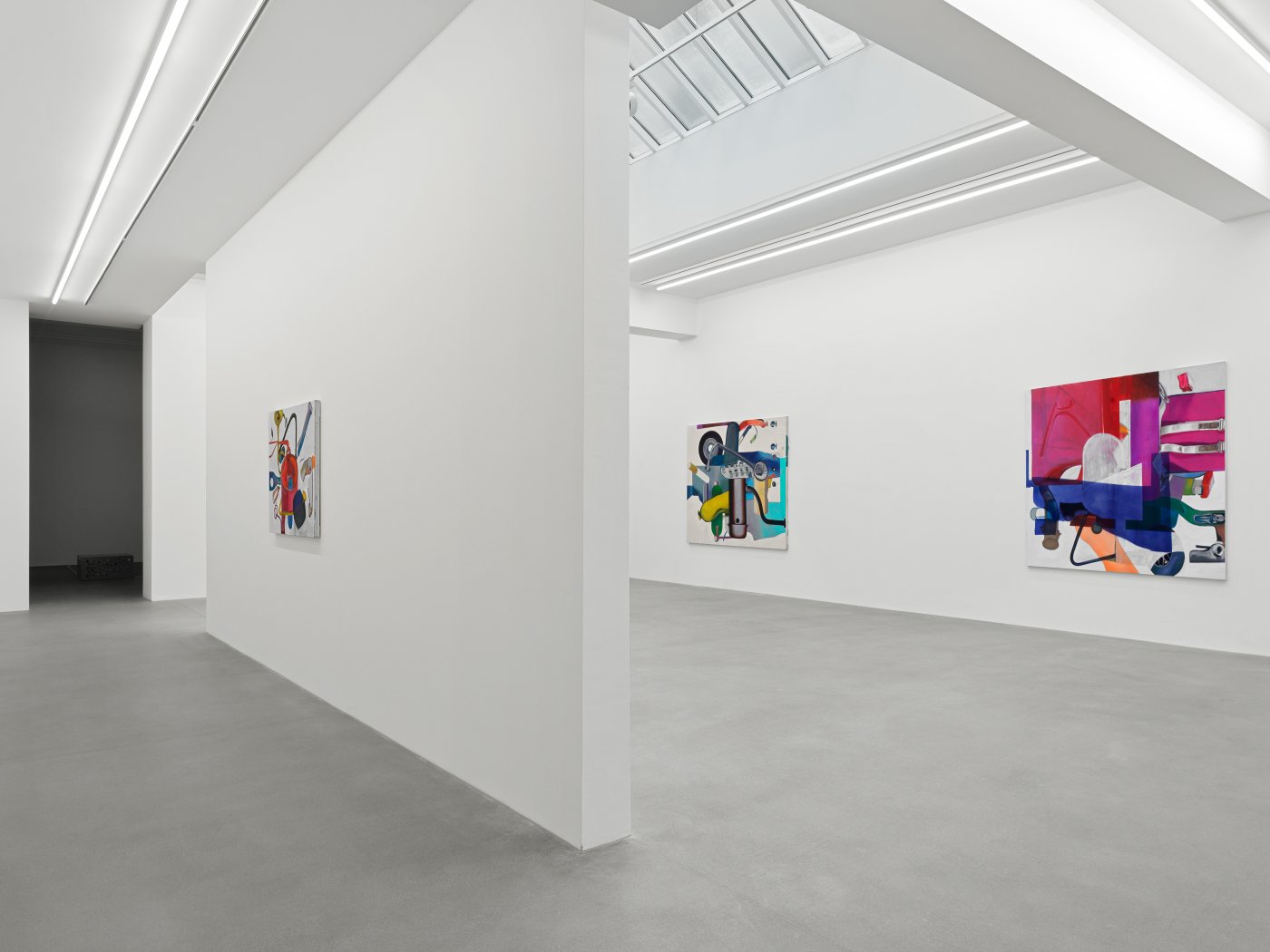 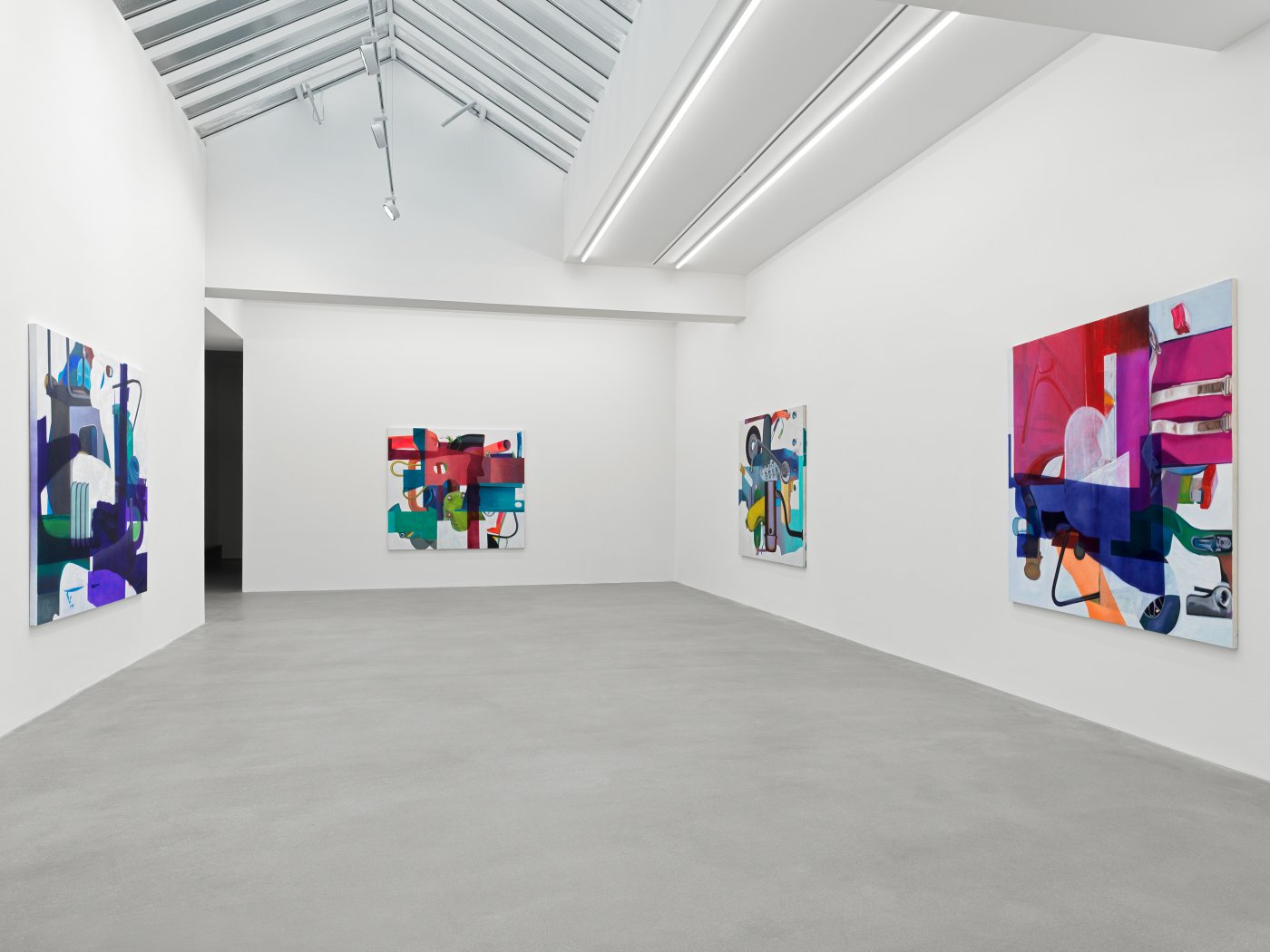 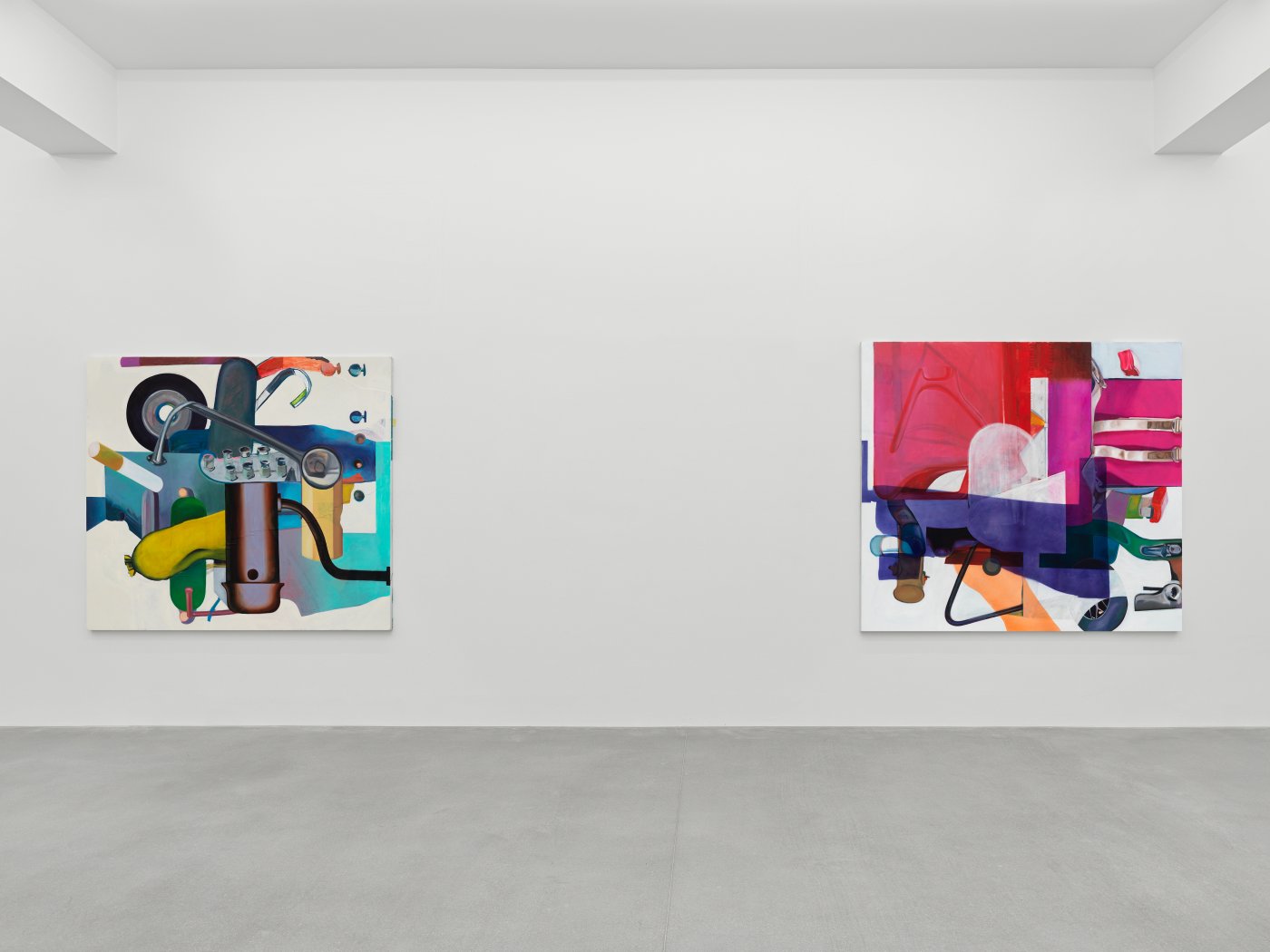 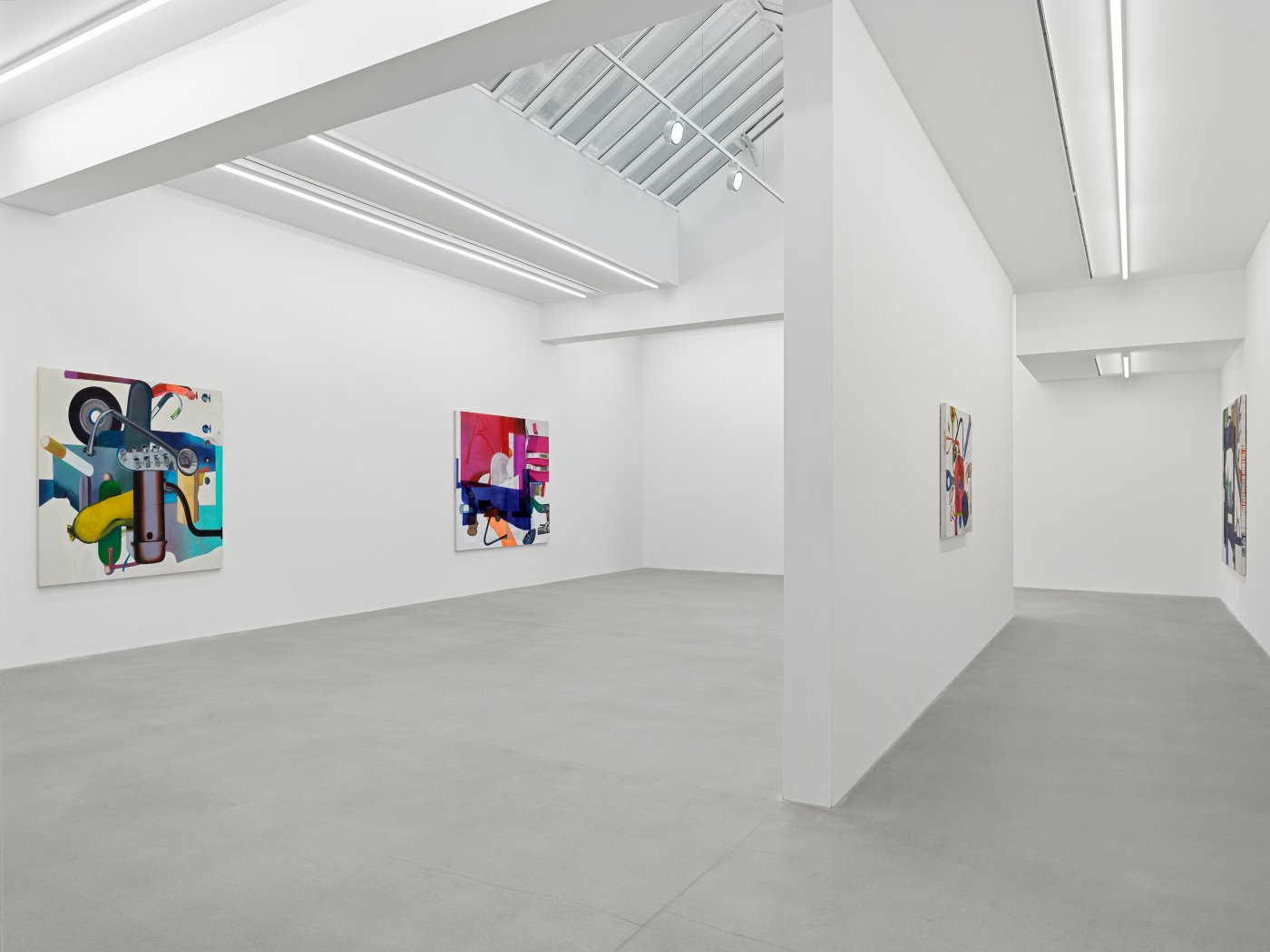 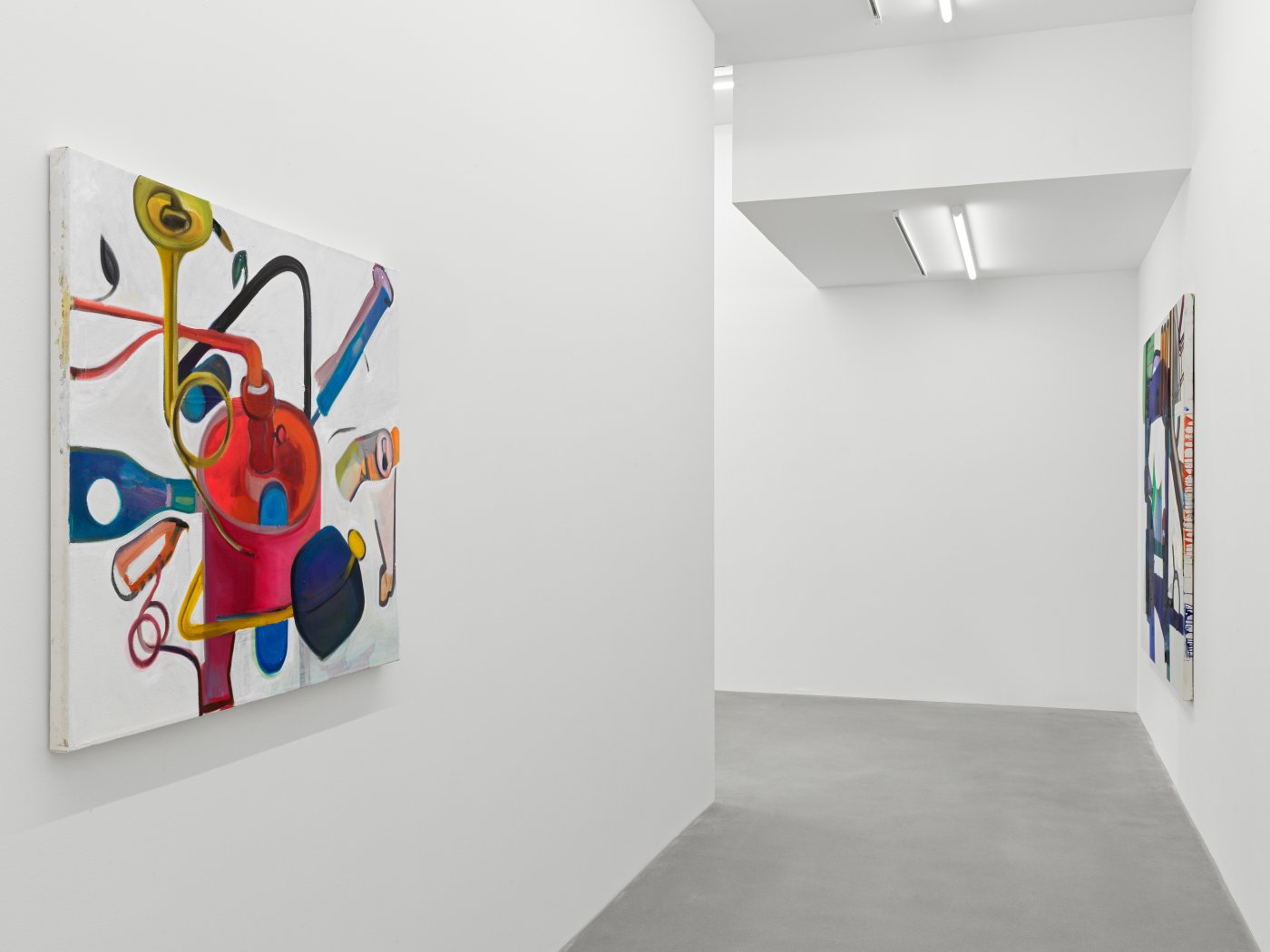 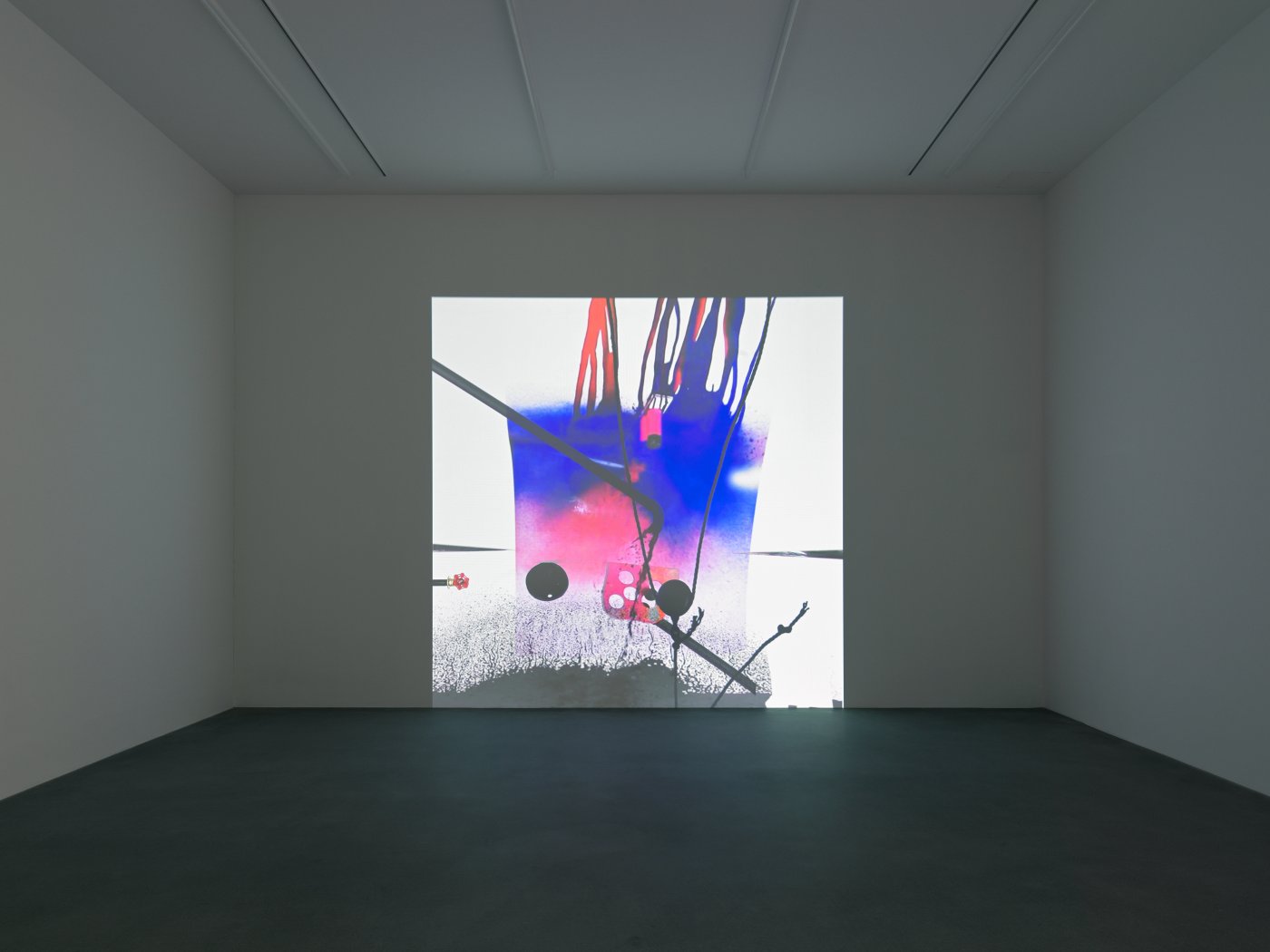 Recently, depictions of an odd assortment of objects have crept into Alex Hubbard’s paintings: jerrycans, rubber wheels, screws, tree branches, hoses, brass instruments—the kind of miscellany usually relegated to the corner of a garage or basement. This hodgepodge sits restlessly among the acidic colors and craggy veneers of the abstract compositions for which Hubbard has become well-known. These various objects seem precariously placed, as if the composition were moments away from falling apart. But they are arranged with precision, and there is a productive antagonism between the illusionistic pictorial space they occupy and the work’s thickly stratified surface.

To make the paintings on view, Hubbard began with pours of brightly tinted urethane resin, a quick-drying material that hardened in splashes and rivulets of varied thickness. He then worked deliberately in acrylic and oil paint, responding to the pools of resin by adding flat areas of color, masking sections with white, and painting illusionistically rendered forms that are often depicted from incongruent perspectives across the space of a single canvas. Many of these forms hover ambiguously between abstraction and figuration. They are often depicted as volumes in space but layered like paper cut-outs in a collage, divorced from any sense of depth.

At every juncture, Hubbard has taken steps to intensify the friction between the fictitious space in which these forms are depicted and the materiality of the painting’s skin. While working with his brush, he has sometimes followed the edge of a urethane spill and sometimes departed from it in disorienting ways. Other ambiguous spatial cues, for example, the use of white paint to place raised ridges of urethane in the background, confound proximity and distance. Careful consideration has been given to the spatial effects of color; high key, glossy pools of resin pop forward from behind subdued passages of oil paint. In some cases, Hubbard has added pours of clear urethane between painted layers to further heighten the dissonance between literal and pictorial depth. And the works conflate two disparate modes of symbolic address: the horizontality of the urethane pours made on the artist’s studio floor and the vertical window of classical easel painting.

All of these strategies function to displace the picture plane—the transparent division between the world represented within the painting and the real space the painting hangs in. In this sense, Hubbard’s recent work belongs to a counter-tradition working against both the Renaissance conception of painting-as-window and a certain Modernist fetishization of flatness as the essential, defining quality of the medium—the two equally premised on a picture plane that is coextensive with the surface of the canvas. Instead of attempting to narrow the gap between the picture plane and flat surface of the painting, Hubbard’s new canvases approach the unstable relationship between these two terms as a generative point of departure.

Along with these paintings, the exhibition also presents the artist’s latest video: The Border, The Ship II (2021). Since the mid-2000s, Hubbard has combined many of the same compositional devices we see in his works on canvas with a Foley artist’s ear for the texture of sound and an idiosyncratic theater of everyday objects in a sui generis practice that tests the boundaries of painting, film, and performance against one another. Animated by a tension between medium-specificity and its loss, these works are presented as large-scale projections, often in aspect ratios more common to painting than cinema.

In this latest video, he continues a decade-long move away from the tabletops on which his strange choreography of objects first appeared. Opaque actions—dunking a plastic skeleton in blue paint or hanging a dumbbell from a pulley—have been layered, via digital chroma-keying, in various orientations to create a multi-perspectival “cubist” space. A rat, seen from above, scurries past a profile view of a chainsaw suspended across two sawhorses; a t-shaped dolly rolls behind a swatch of shiny orange fabric that paradoxically rests on a perpendicular plane above it. Gravity pulls in every direction while a seamless white backdrop serves ambiguously as both blank surface and indefinite depth. Yet here, as with his earliest videos, Hubbard still proposed something akin to the flatbed picture plane—which is to say, “any receptor surface,” as Leo Steinberg defined the term, “on which information may be received, printed, impressed—whether coherently or in confusion.”

If the slippage between Hubbard’s performance behind the camera and the compositional alignment of color and shape it produces on-screen evokes the conditions of painting, his insistence on the rhythmic value of noise (as innocuous as a rattling pipe or squeaky wheel) reminds us that we are watching a time-based art. We might place similar significance on Hubbard’s decision to eschew natural sound in favor of a Foley soundtrack whose disjunctive exaggerations emphasize the material presence of each video, unhinging the actions recorded from whatever quasi-narrative one might try to ascertain. Footsteps reverberate unnaturally as Hubbard walks across the nonspace of his set, and often we are aurally convinced that flows of paint gush with more force than the visual evidence would suggest.

Hubbard’s unraveling of the suture between sound and image, his accenting of the seam between each of his digitally composited camera shots, and his extension of the gap between gestures and their significance again recalls Steinberg’s description of the flatbed, an analog of “operational processes” that is beyond “painting as such.” Paint—whether sprayed, poured, or splattered—plays a leading role in The Border, The Ship II, but the work is not “about” the history of painting, nor is it about the history of performance or video art. Rather, in The Border, The Ship II, Hubbard borrows aspects of these familiar forms to create a new, hybrid medium that is marked by provisionality but, like his paintings, structured by its own internal logic.