Meliksetian | Briggs presents Time and Intent, a solo show by Alex Heilbron. The exhibition presents five paintings that are part of a larger body of work she began prior to, and completed after, the onset of the pandemic. 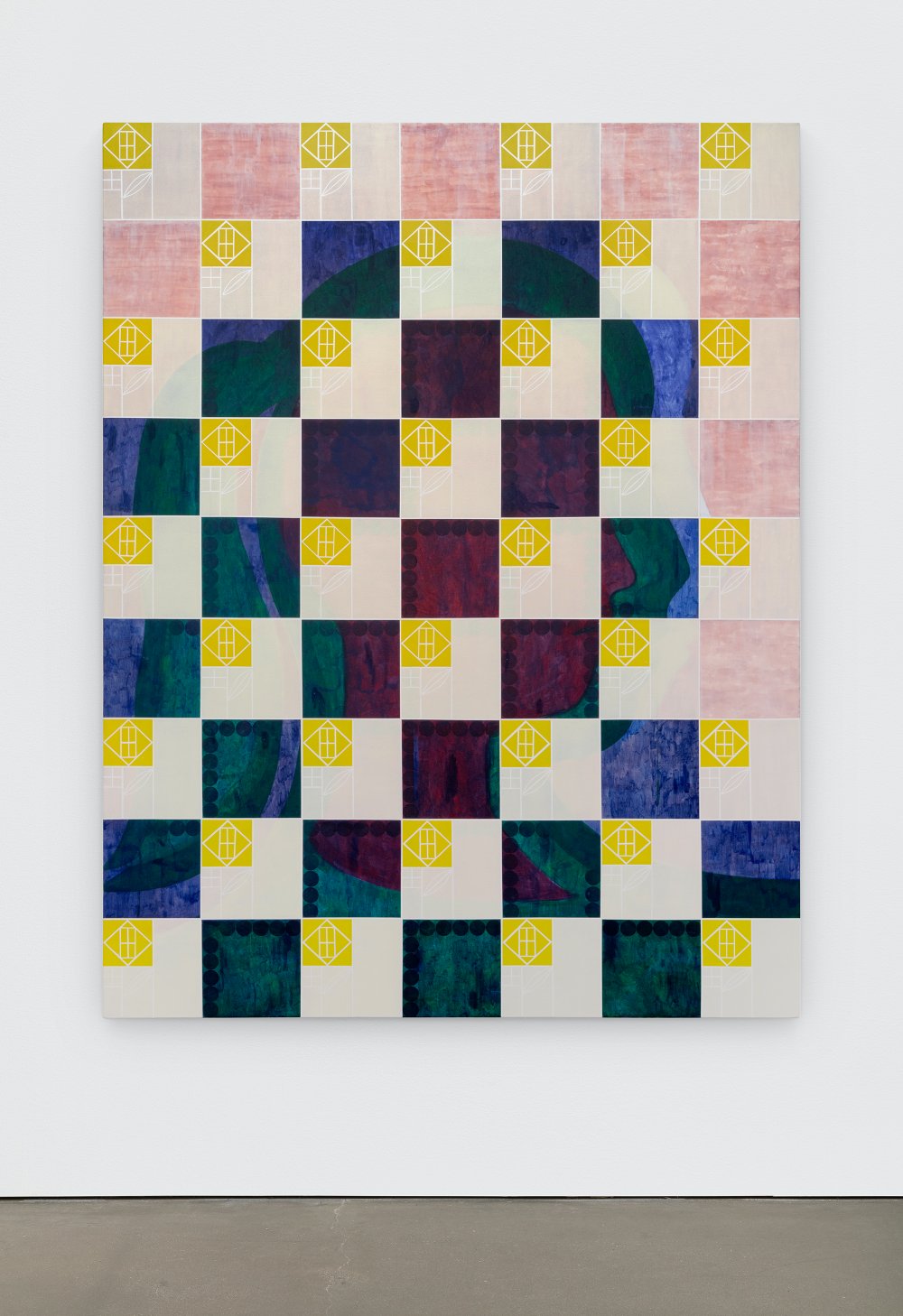 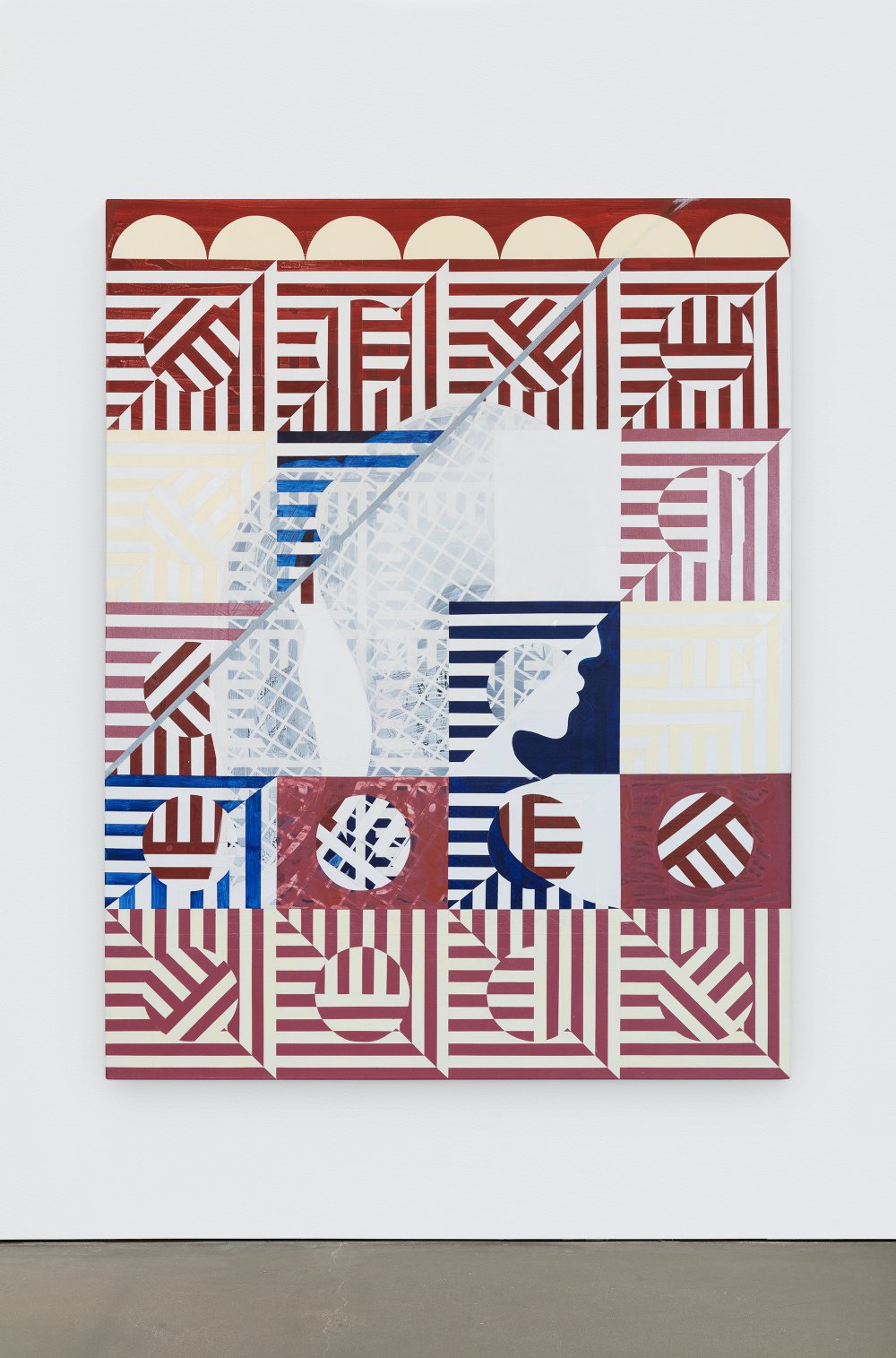 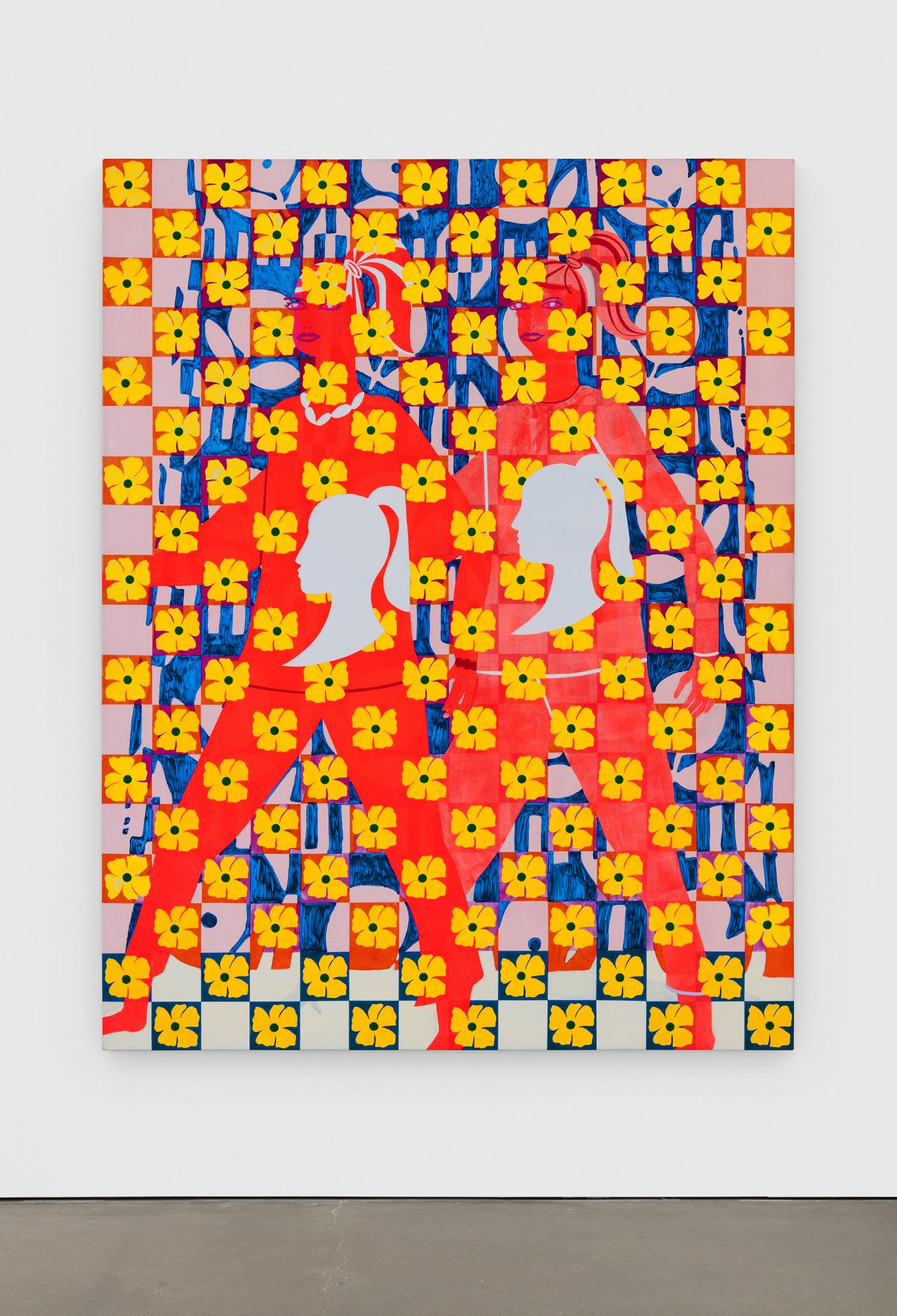 Alex Heilbron
We Are Aspiring, 2020 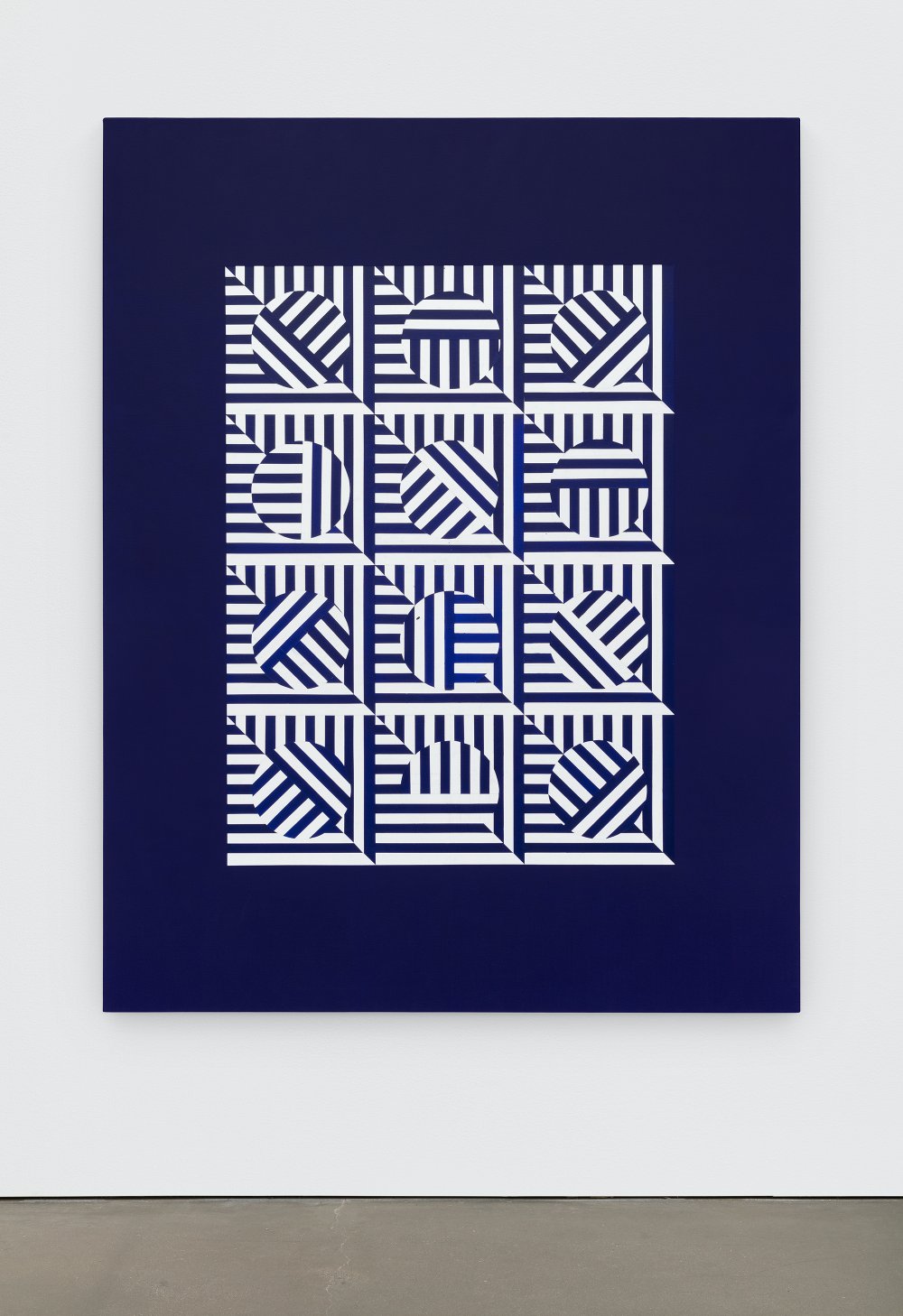 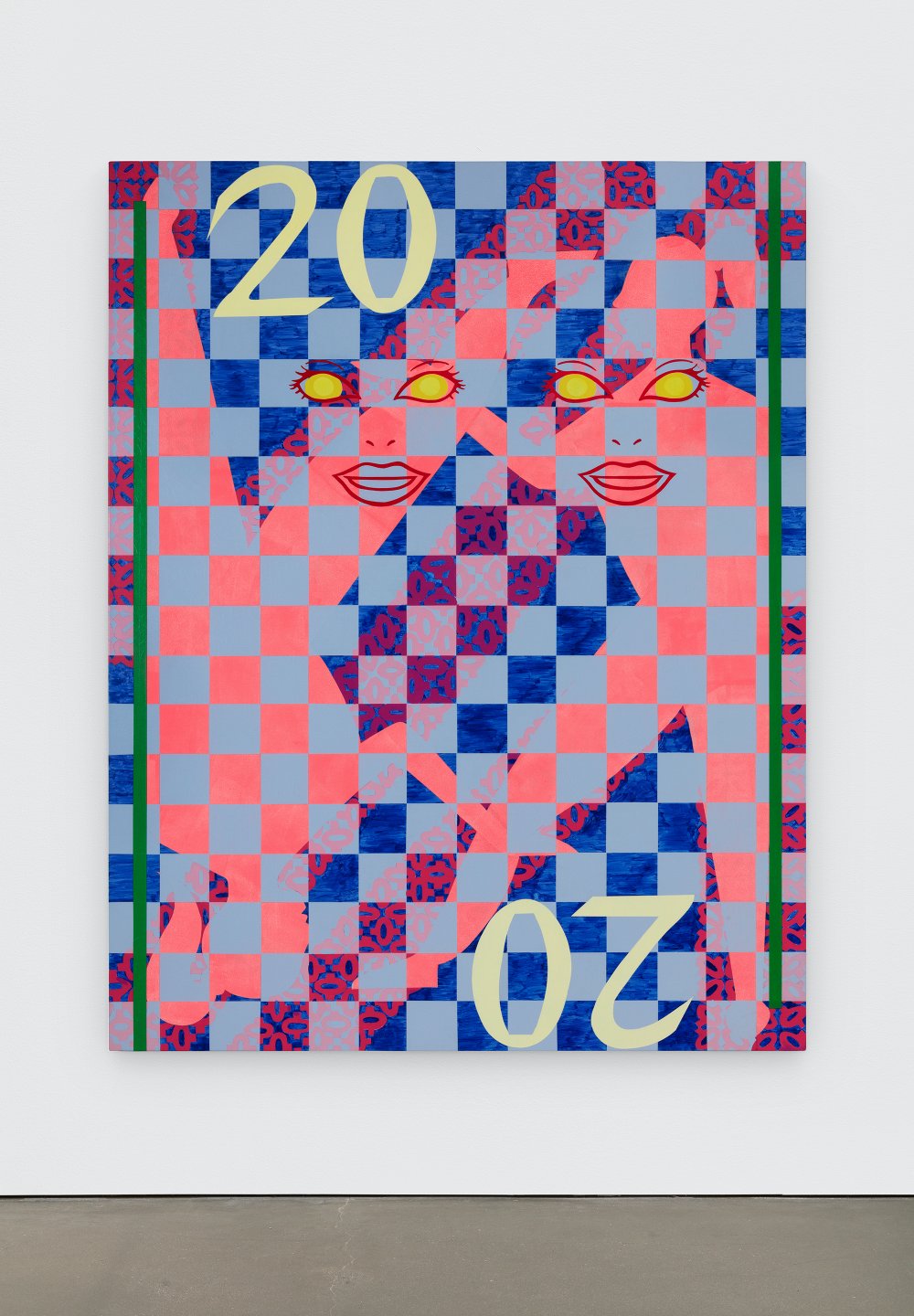 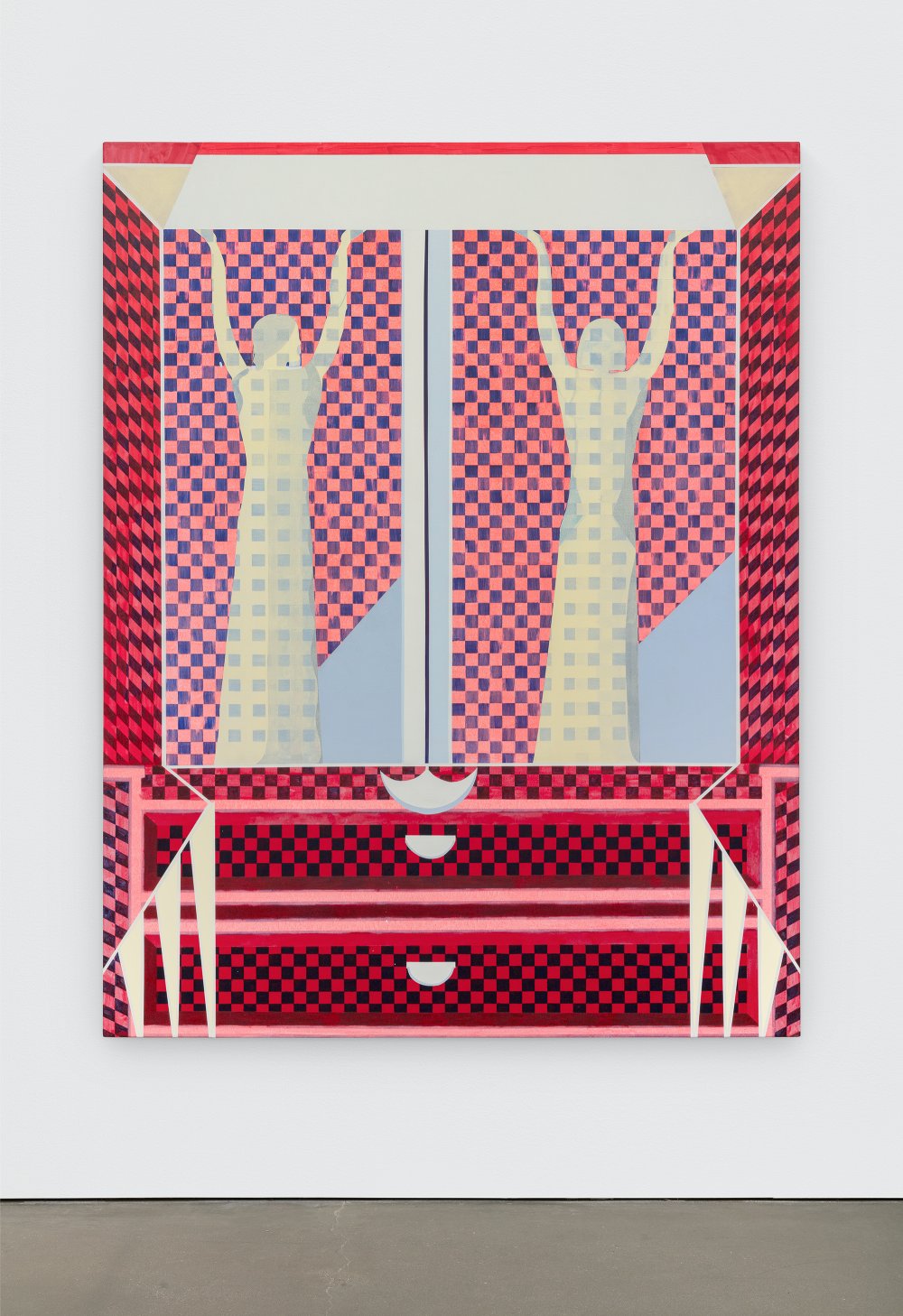 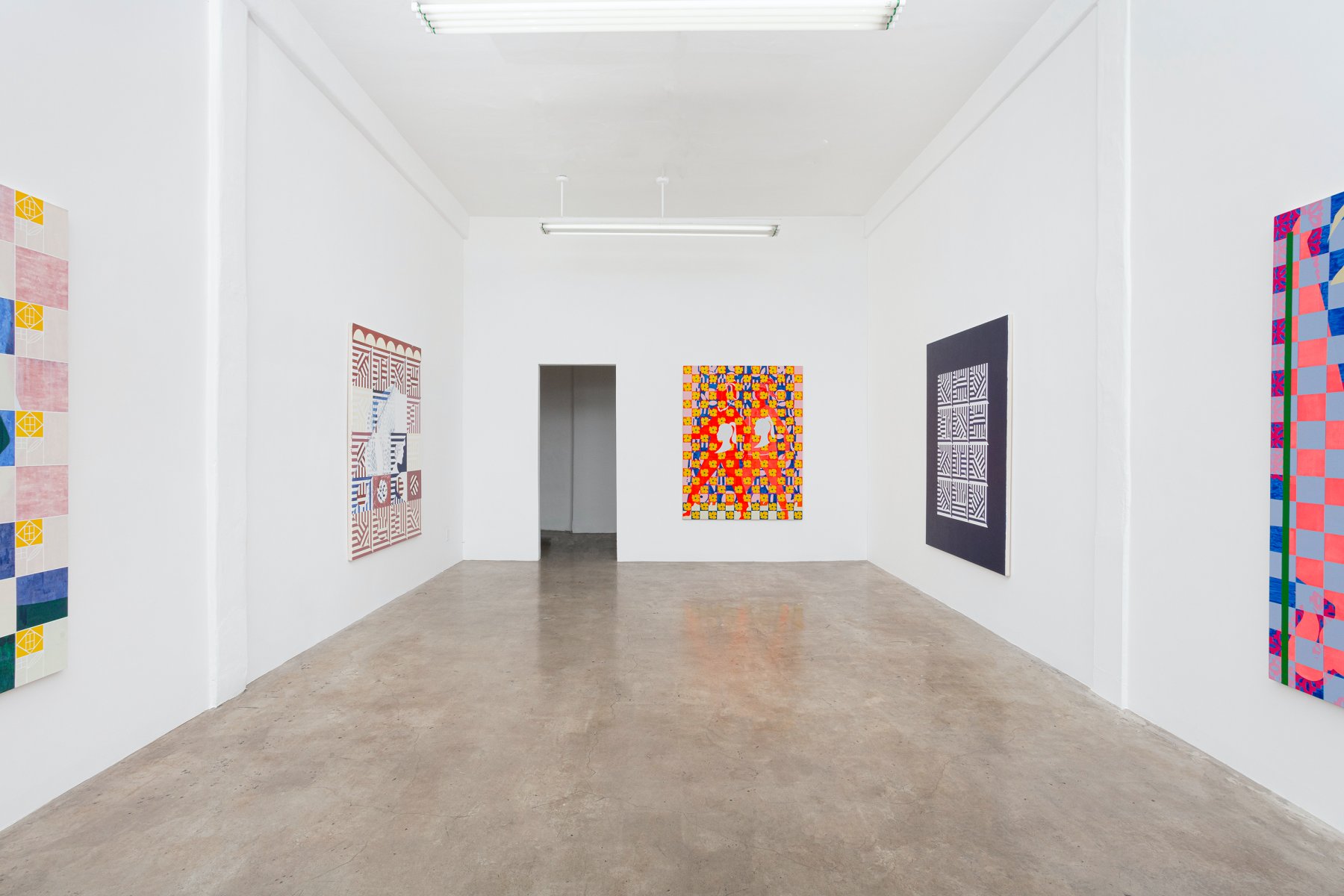 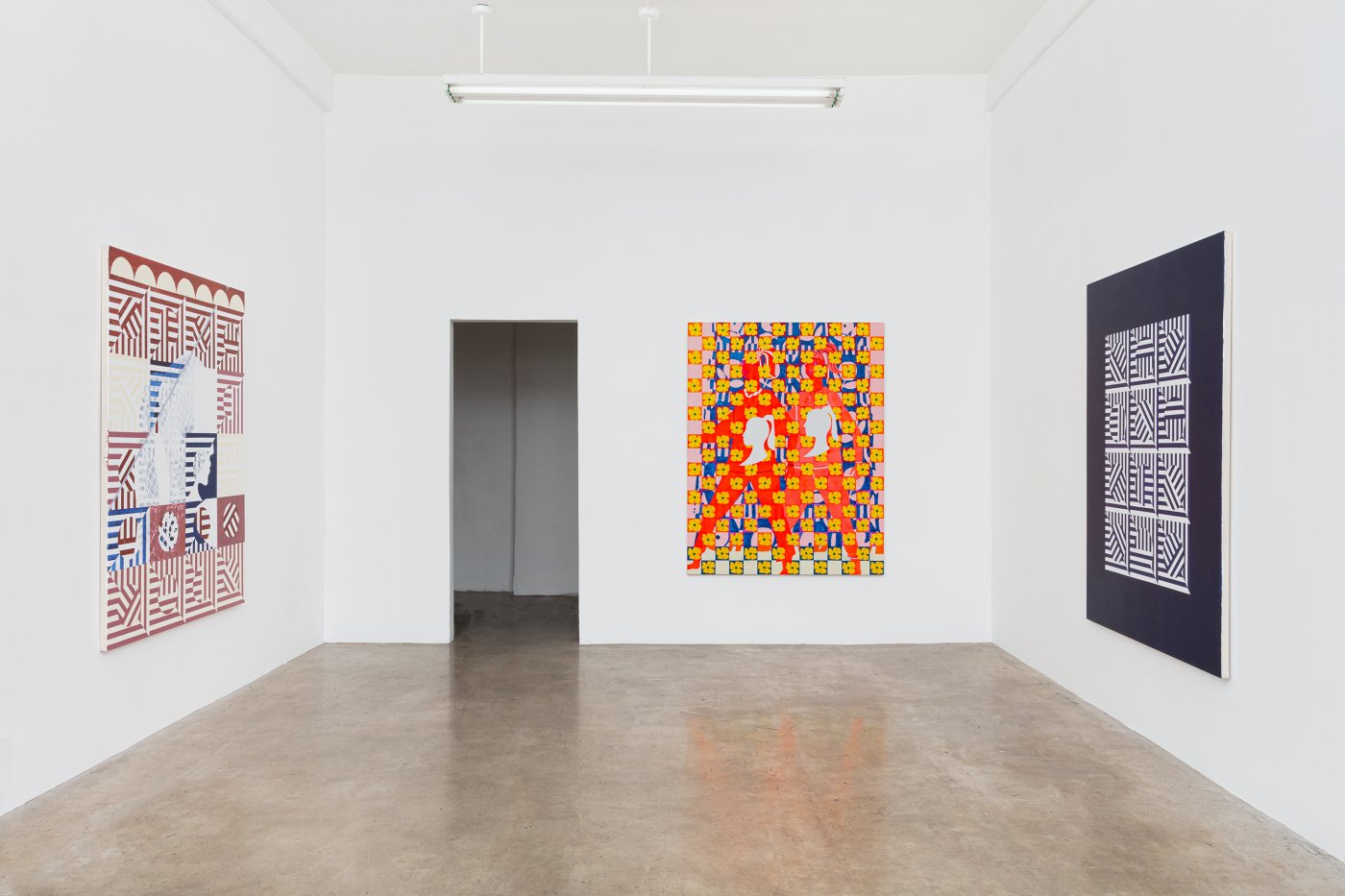 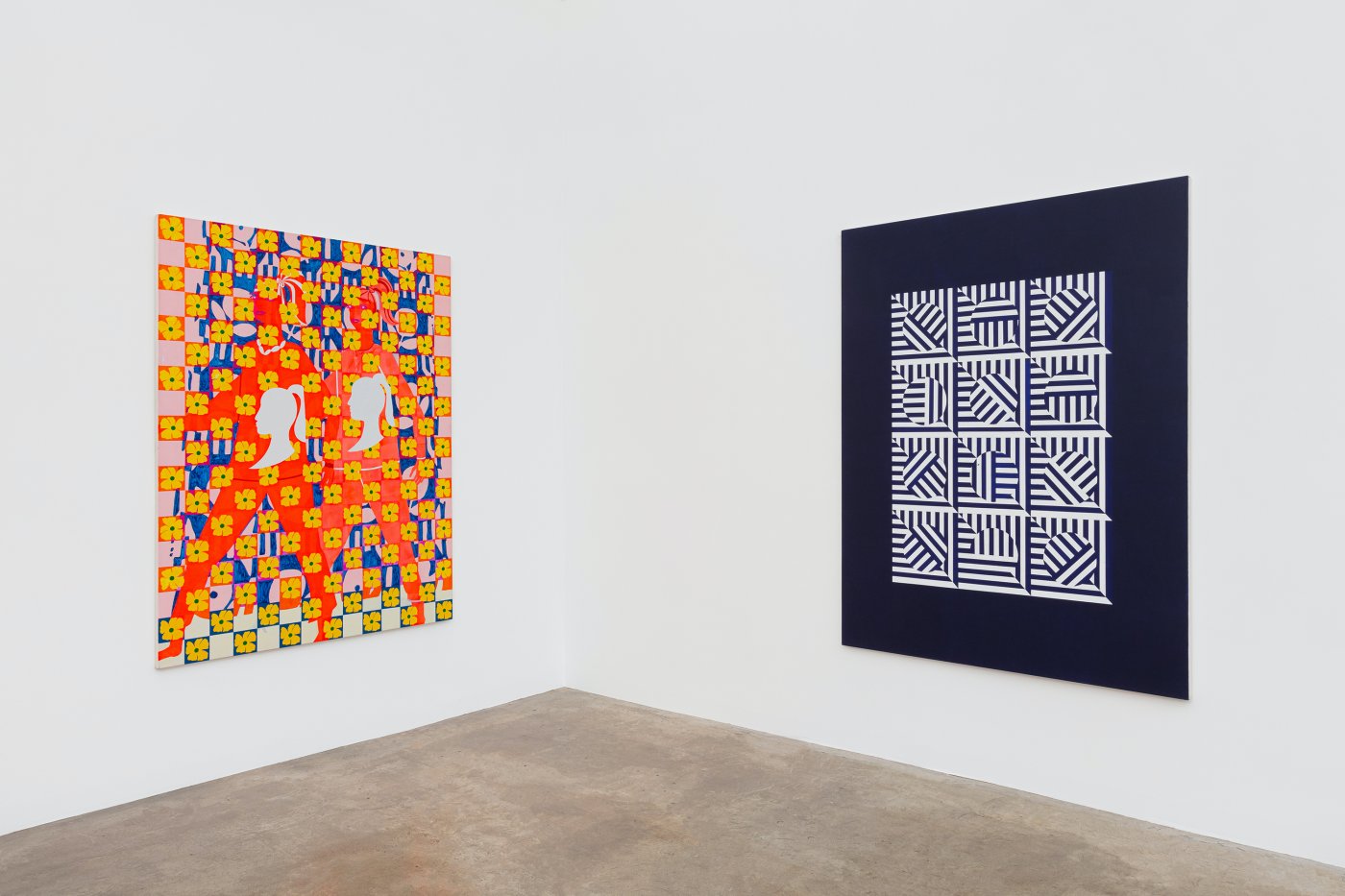 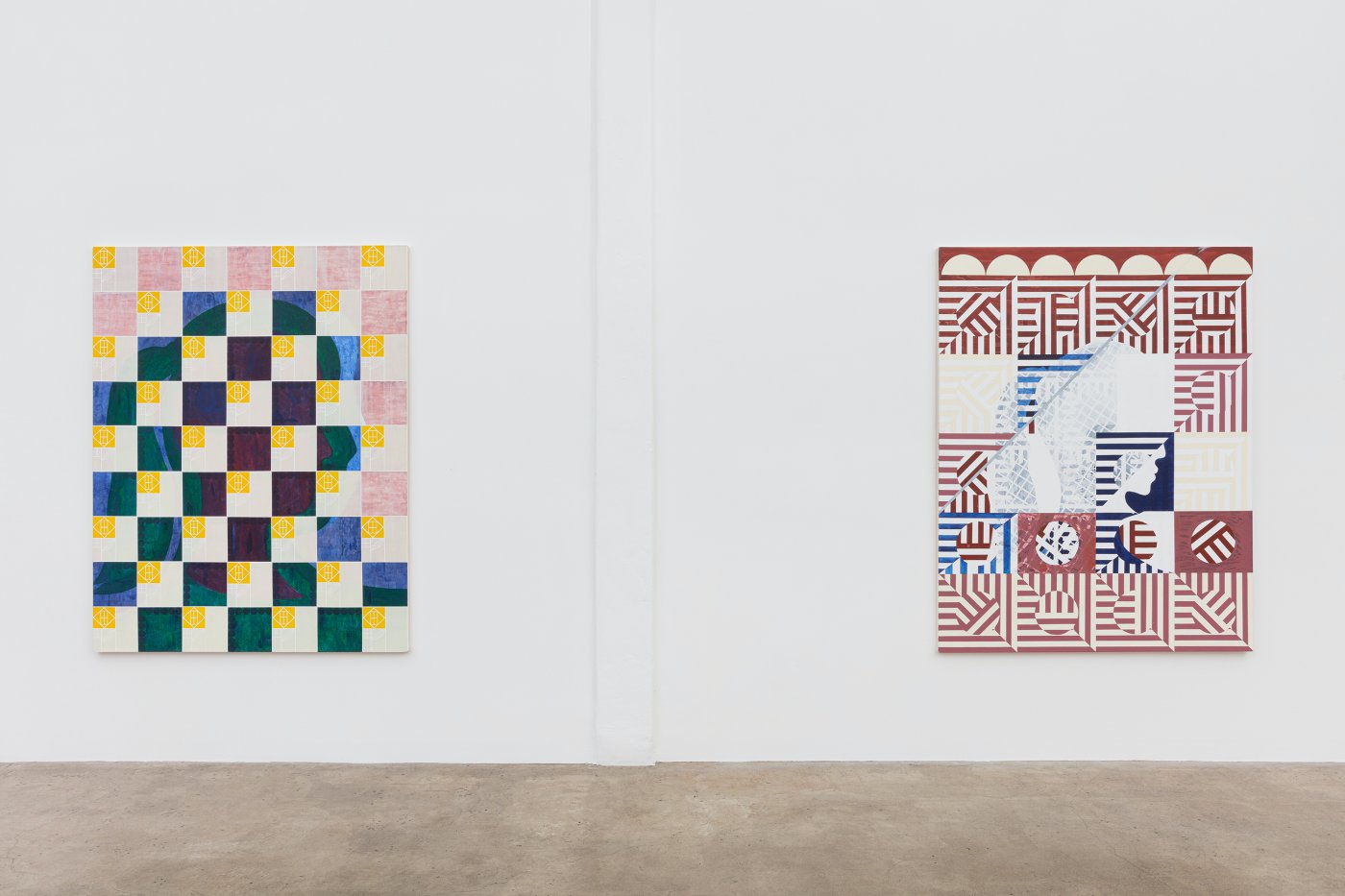 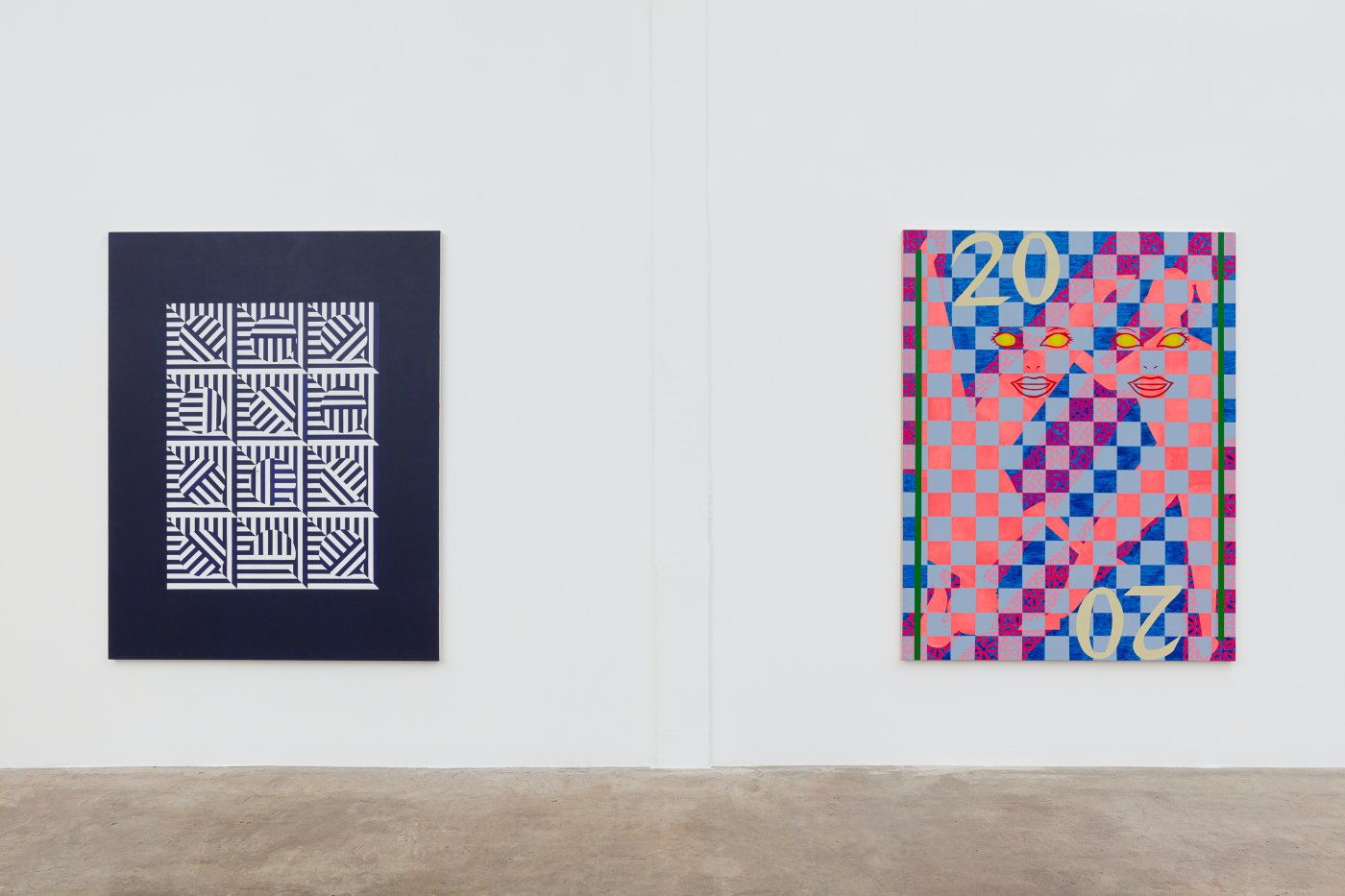 The power of pattern lies in repetition. As an ongoing echo of the past, a pattern defies linear time and one-way movement, all the while, maintaining structure. Using techniques of doubling and repetition, Heilbron creates paintings in which patterns form grids of floral motifs, geometric shapes and rigid lines that withhold and expose the underlying imagery of female figures.

Structures are known to provide guidance and familiarity, perhaps they even become a given. Yet they also impose restrictions and dependence due to their predetermined and fixed nature. As such, structures are formats we can simultaneously long for and long to escape from. Positioning itself in between these ends, this body of work uses movement and transformation within a structured environment to challenge traditional notions of painting and femininity.

At first sight, Heilbron’s paintings register as tight compositions of separate layers on top of each other. Their flat, exact, and repetitive shapes suggest intensive labor and a steady hand with no room for error. Shaped into a grid, patterns seem to hold the canvas and its contents in place. A closer look, however, proves this order to be more porous than appears. The patterns do not consequently lie atop, nor fully cover, the underlying imagery. Rather, they weave between the various layers of color and image, and at times are even integrated with the figures. Intertwined, the layers confront perspective as background and foreground collapse into one continuity of horizontal space. In lieu of holding, these patterns then generate movement and inversely transgress two-dimensionality. The allusion of three-dimensional space, painting’s historical intention, is explicitly rejected. Visible brushstrokes not only fracture the seemingly perfect grids, but alternating densities of paint application show an underlying chaos that subtly challenges the order of these works.

The depth of Heilbron’s works lies in its material layering and its iconographic language. Playing with the transparency of the paint, Heilbron shares an insight into her painting process. Meanwhile, archetypal shapes of girls, flowers, squares and circles, mimic this transparency conceptually by exposing structures of (self-) representation and commodification. Material and content are democratically intertwined; pattern (flower) over double (girls) over pattern (circle/square). These exhausted icons, represented as “just” shapes, void of individualized details, and the way they are strung together open up room for the revaluation of their meaning. By way of appropriating these passive and decorative clichés of themselves, the archetypes have regenerated their agency; returning our gaze like a mirror might and thus bringing the viewer into the structure. Another shape and rupture in the grid.

The various patterning techniques that guide this work facilitate distillation of concepts like adolescence, decay and movement into notions of temporality. Not unlike the specular aspect of a graph, Time and Intent finds a balance in transition between dualisms: order and chaos, active and passive, before and after.

Alex Heilbron received her Bachelor of Fine Arts in 2009 from the San Francisco Art Institute, and studied at the Kunstakademie Düsseldorf from 2014-2017. In 2020, she was awarded her Masters of Fine Arts from the University of California, Los Angeles. Heilbron has exhibited both nationally and internationally. Most recent solo exhibitions include High Shame at Hiestand Galleries, Miami University, Oxford, OH and Scent Description for a Young Woman at Ashley, Berlin. Group shows over the past few years include exhibitions at LAXART, Los Angeles. Moscow Museum of Modern Art, Moscow, Cosmo Sports, Düsseldorf, Good Forever, Düsseldorf, Contemporary Fine Art, Berlin and Unit/Pitt Gallery, Vancouver. In 2019, she won the William and Dorothy Yeck Purchase Award and the Helen Frankenthaler Scholarship in 2019 – 2020. Heilbron lives and works in Los Angeles.

A new artist publication 2020, featuring works in the show, accompanies the exhibition.