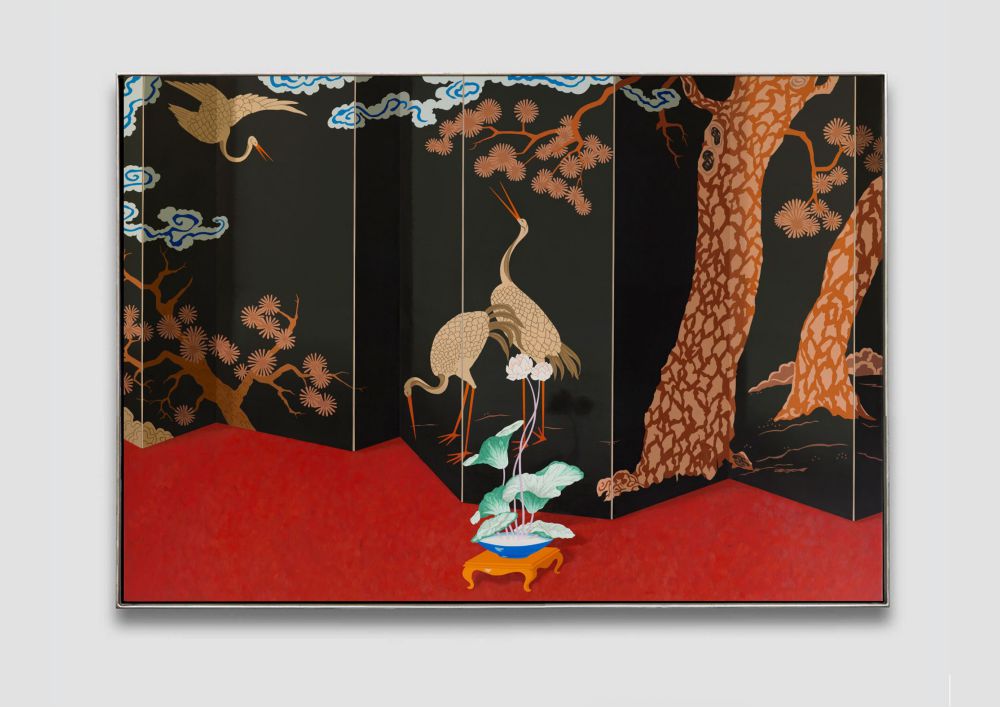 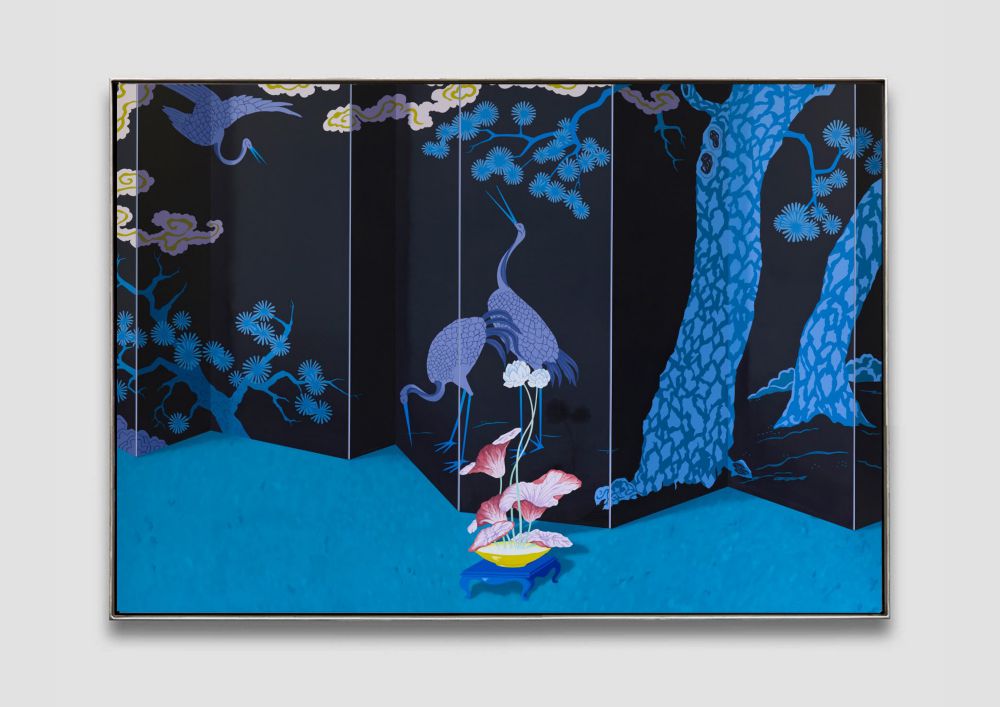 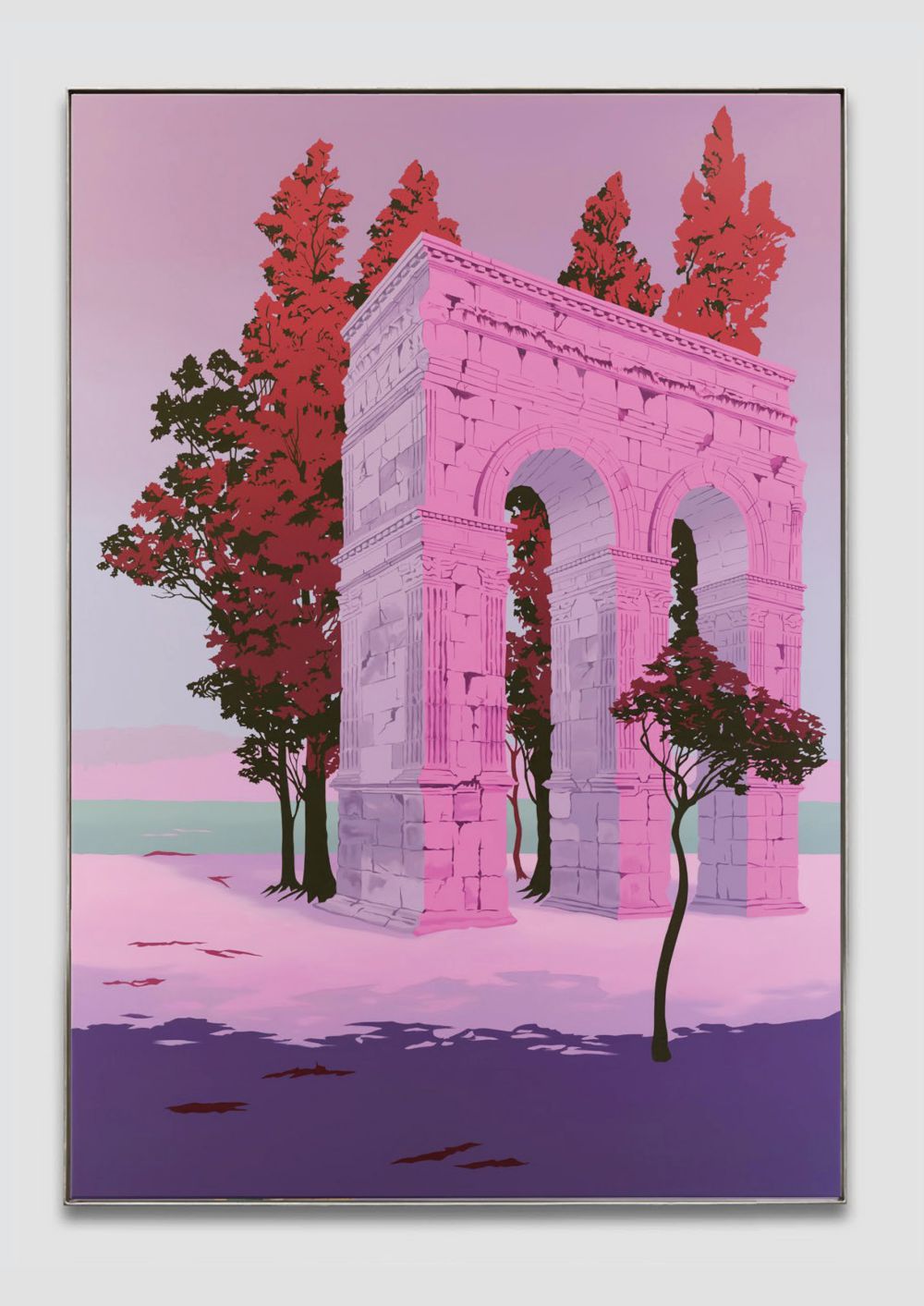 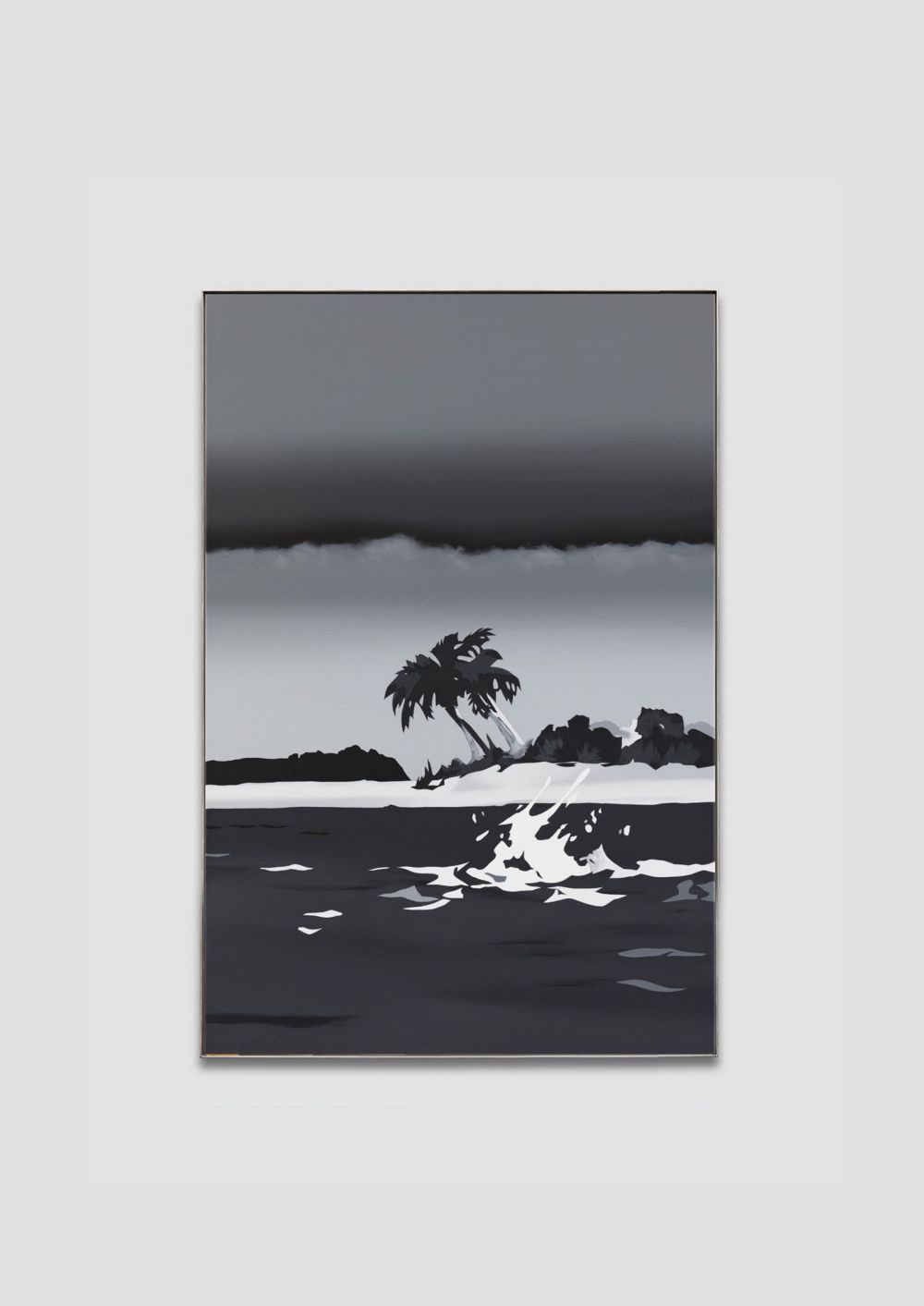 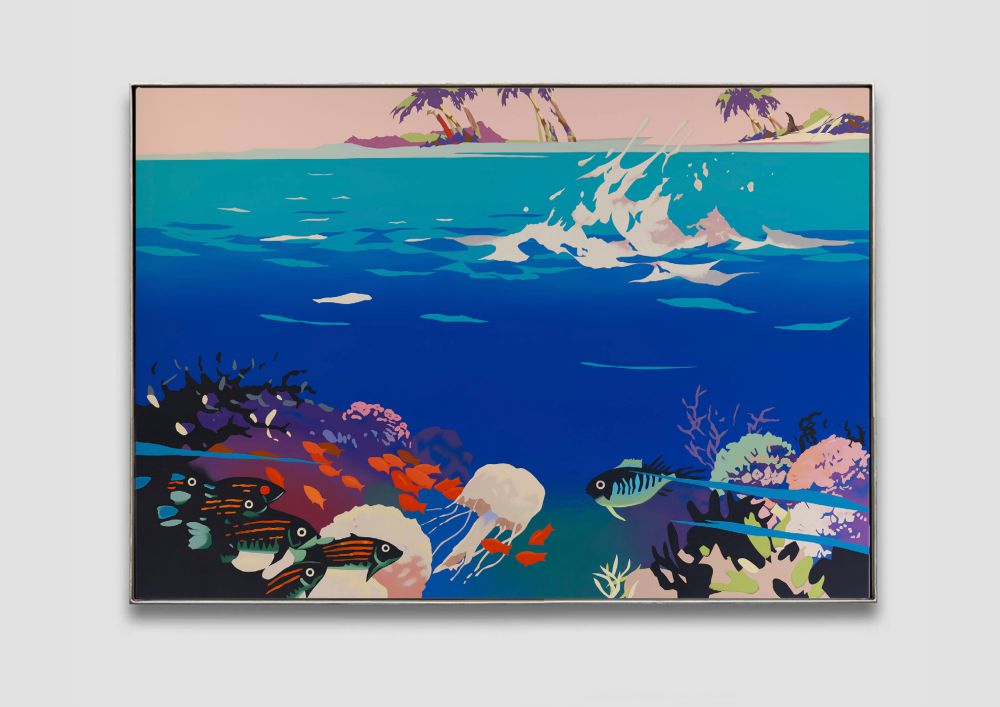 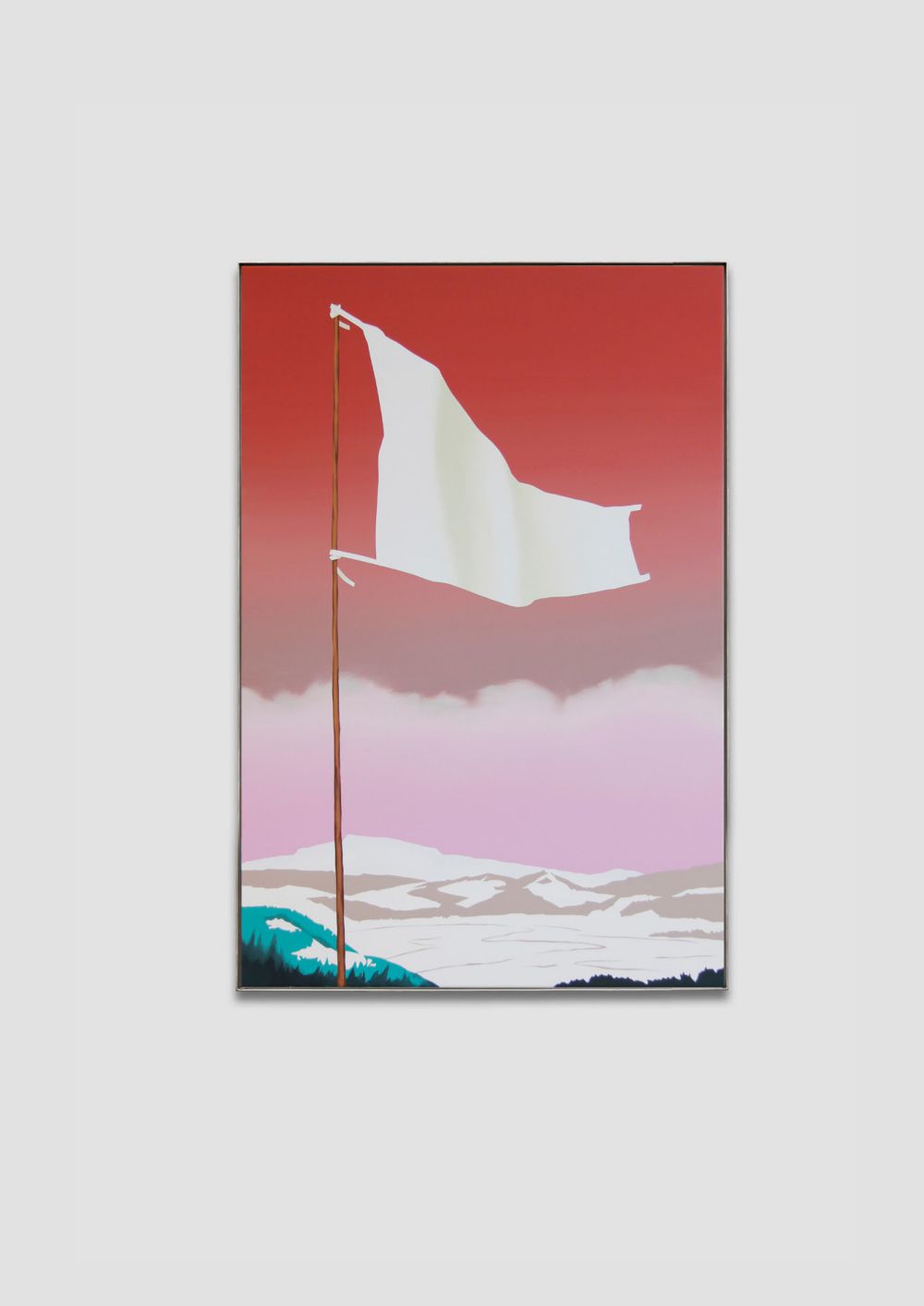 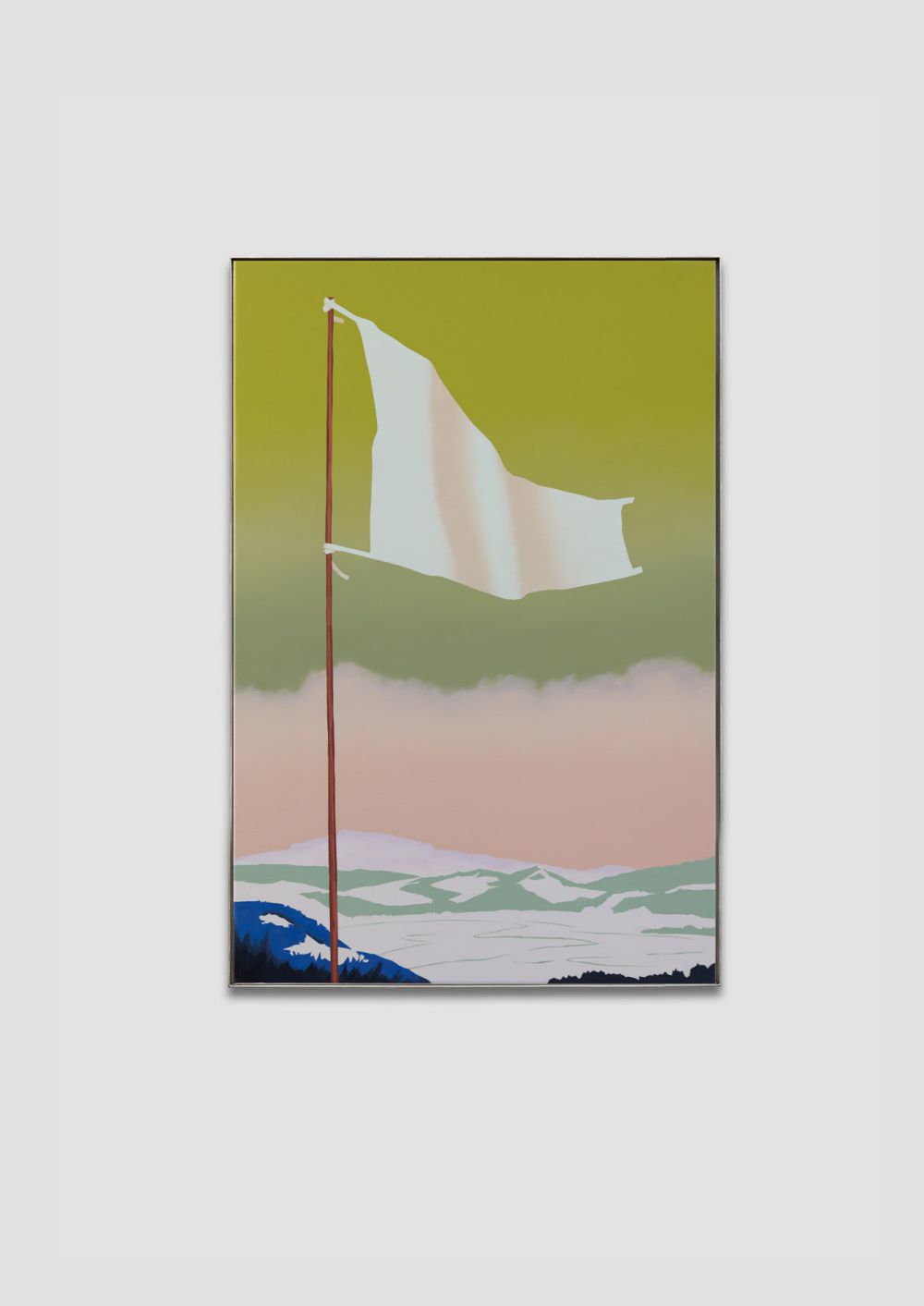 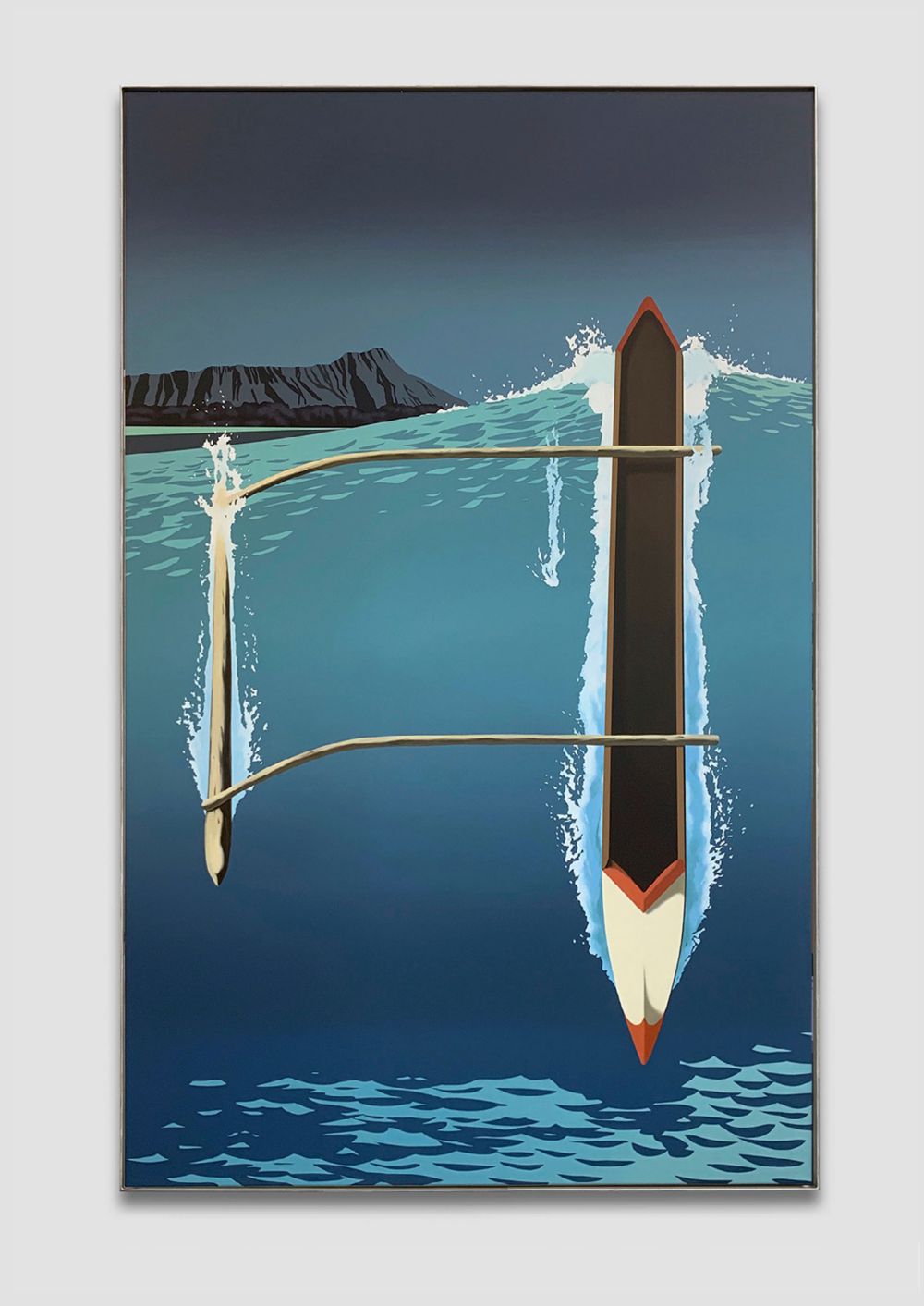 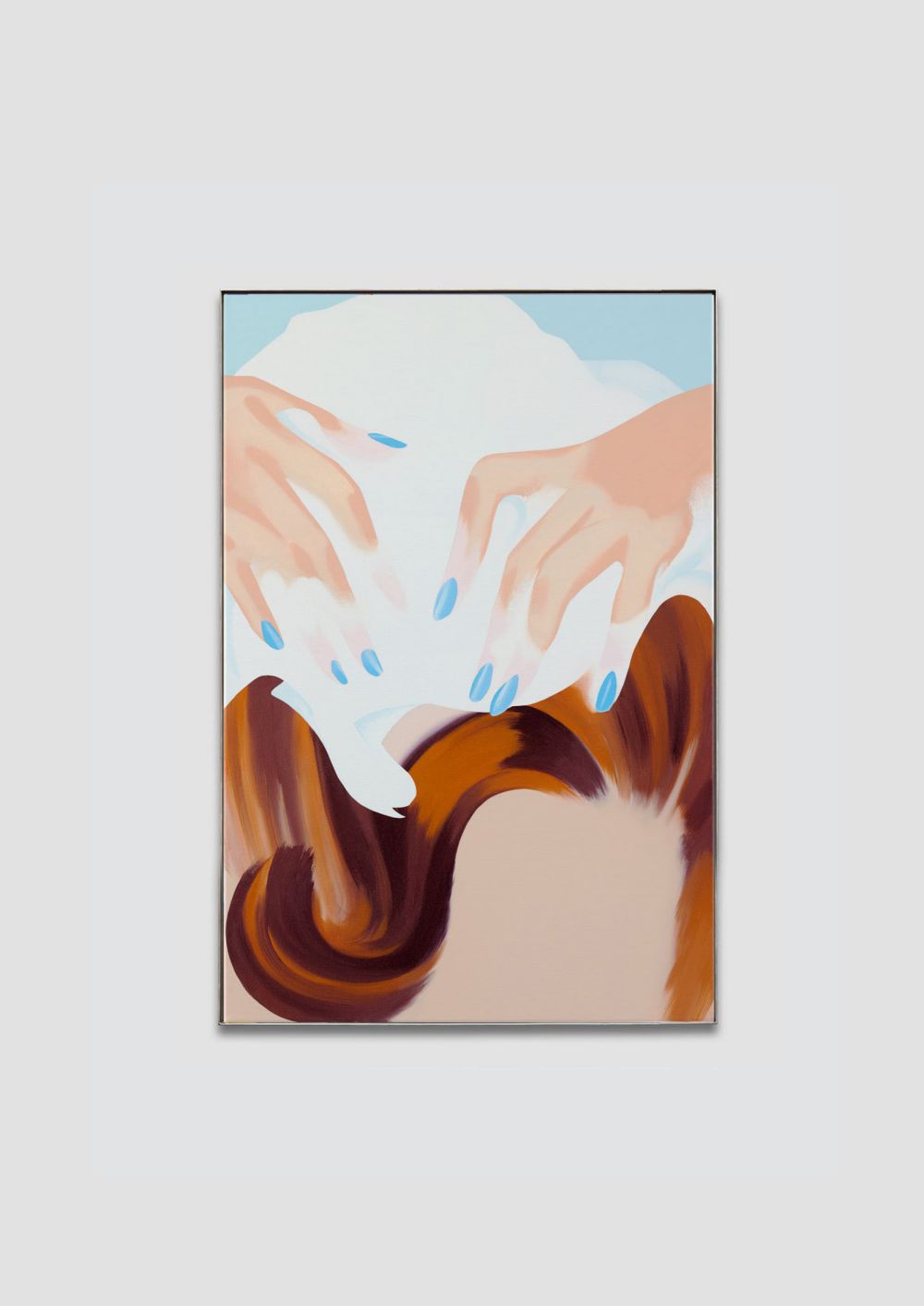 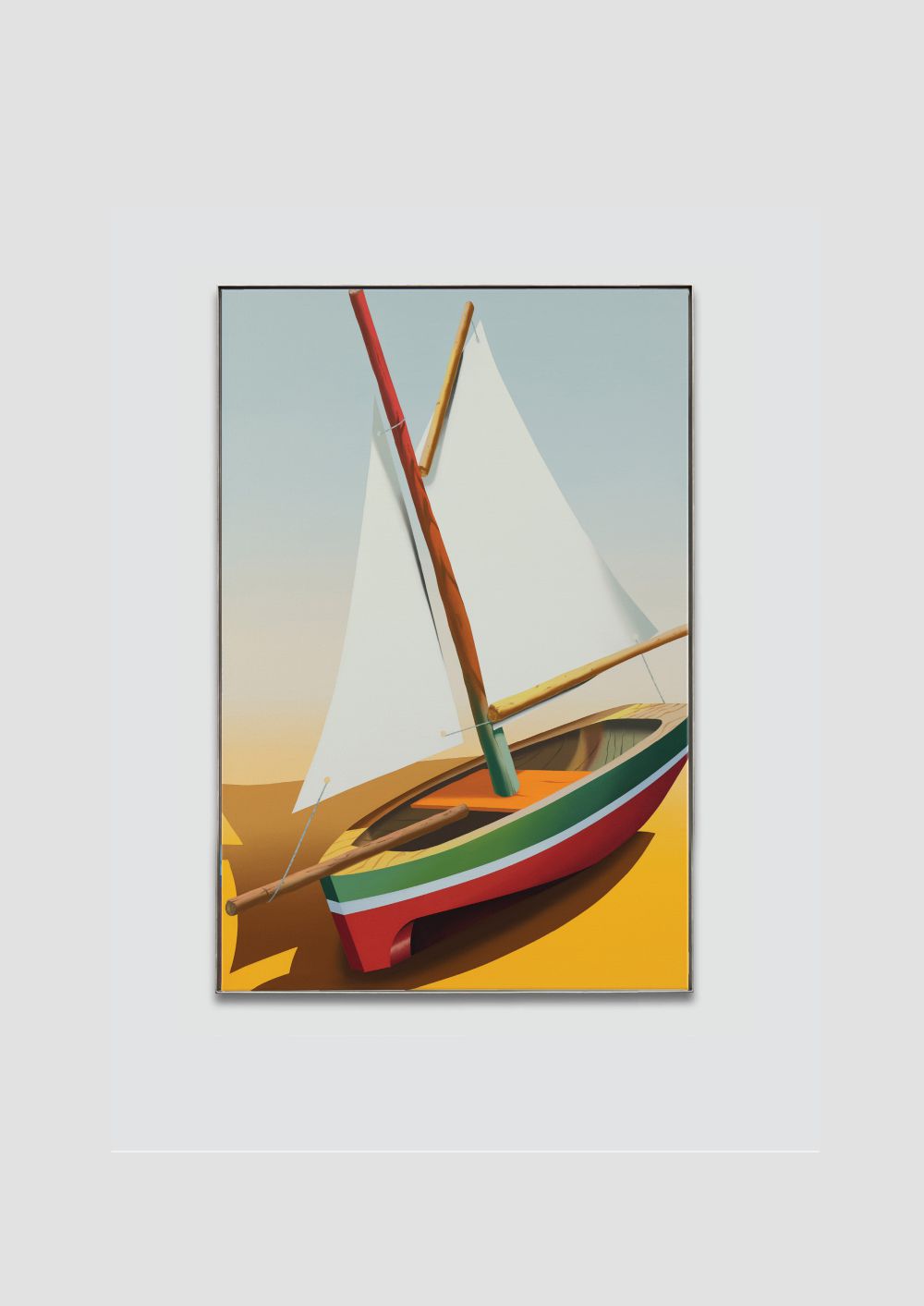 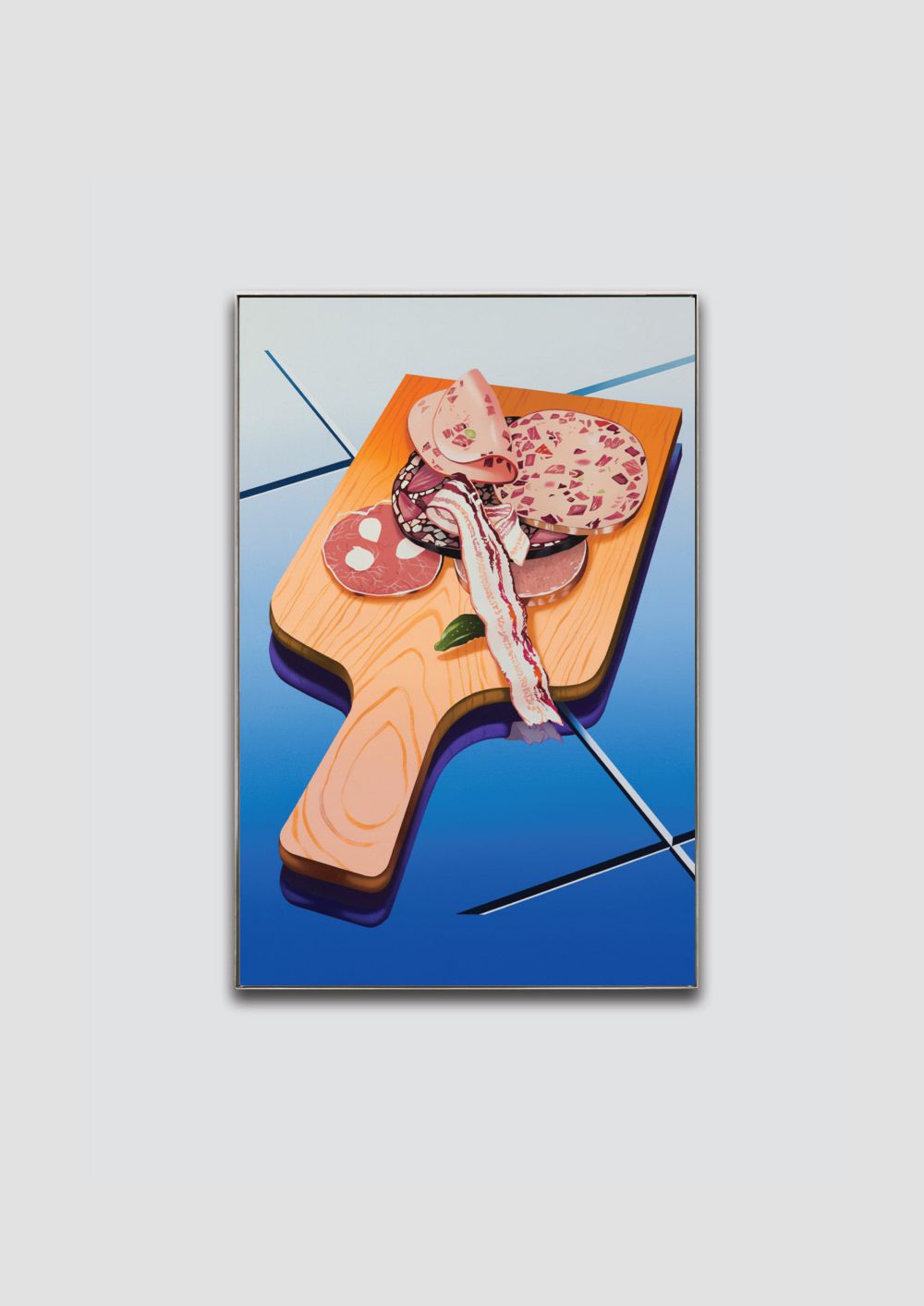 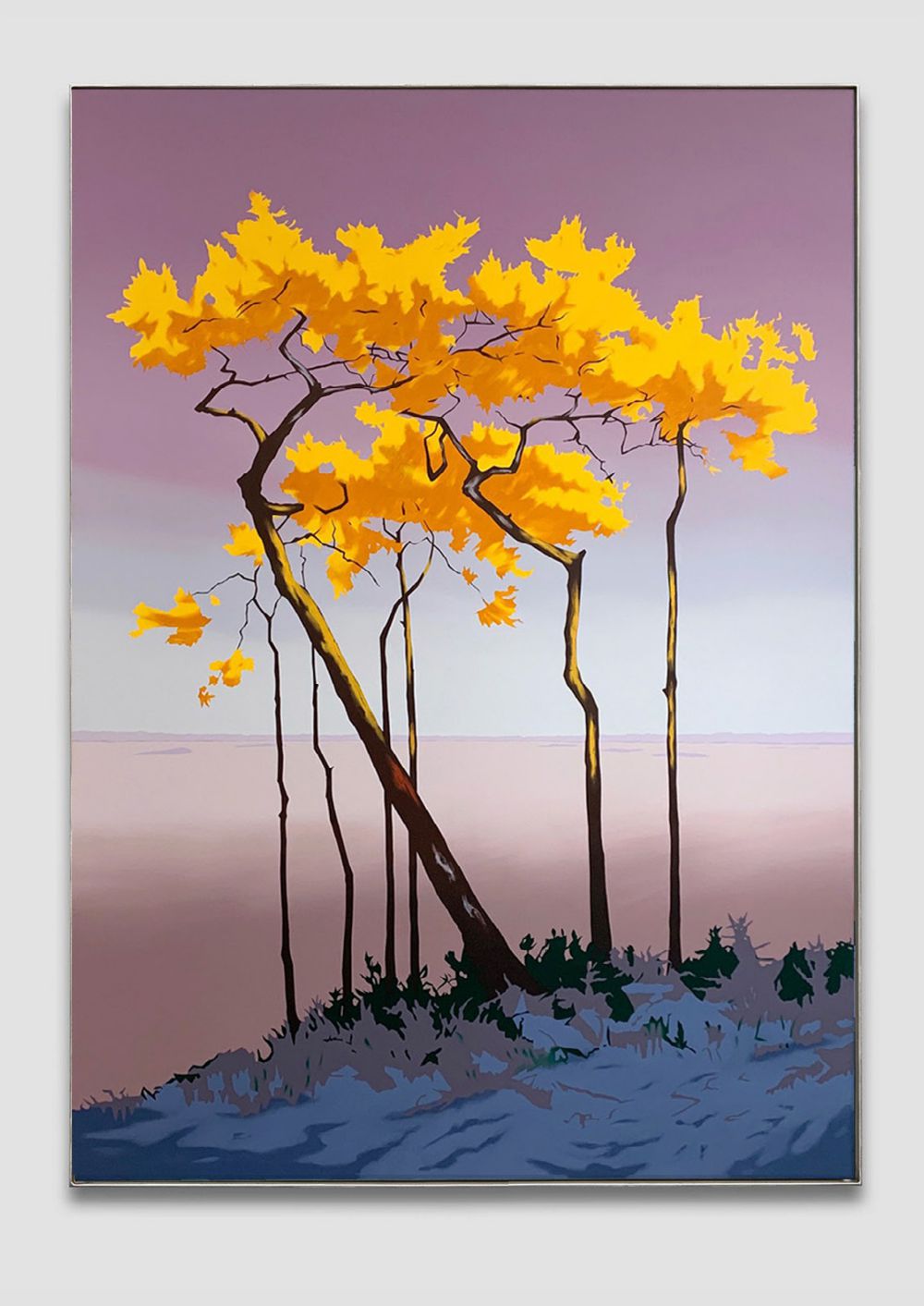 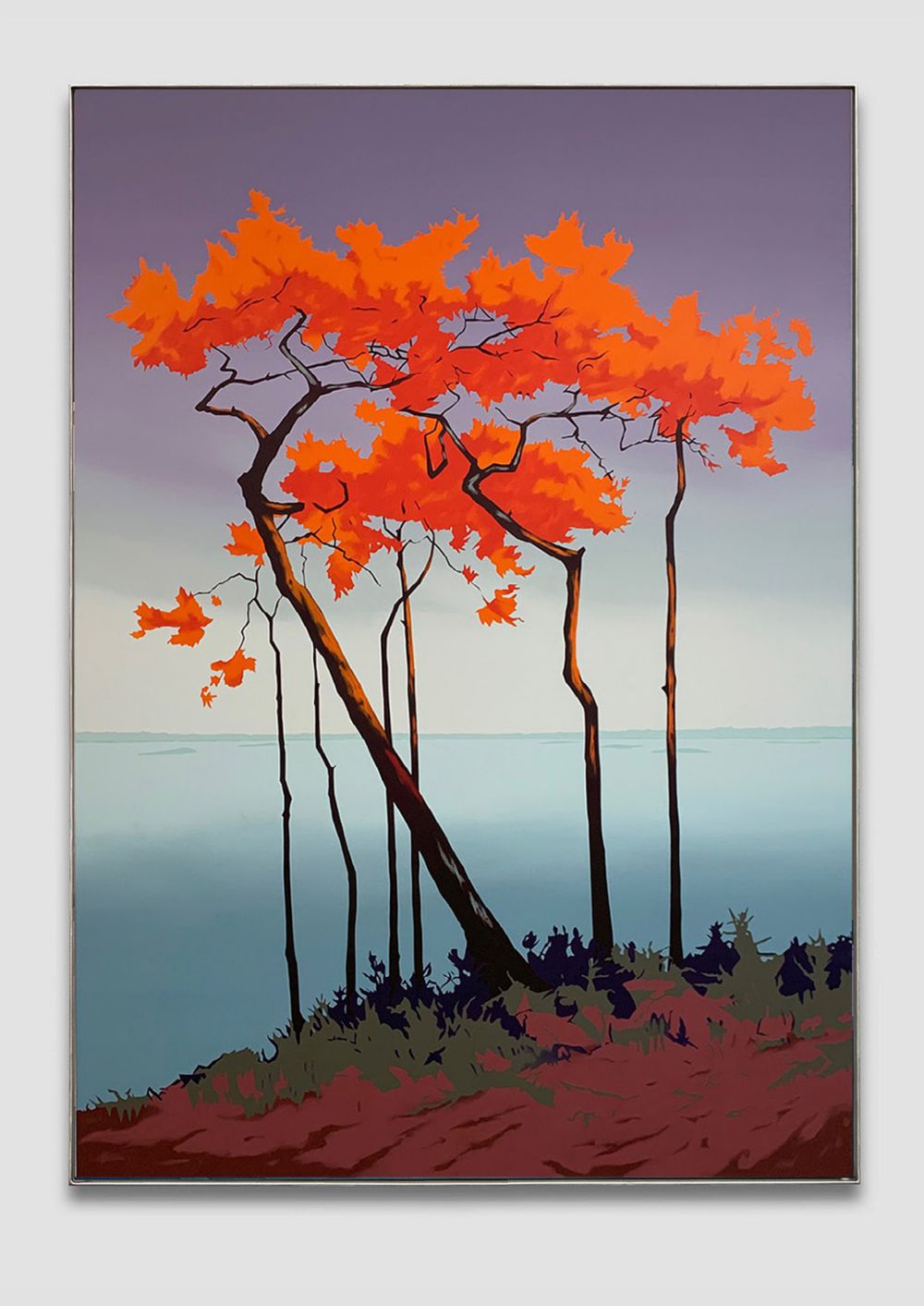 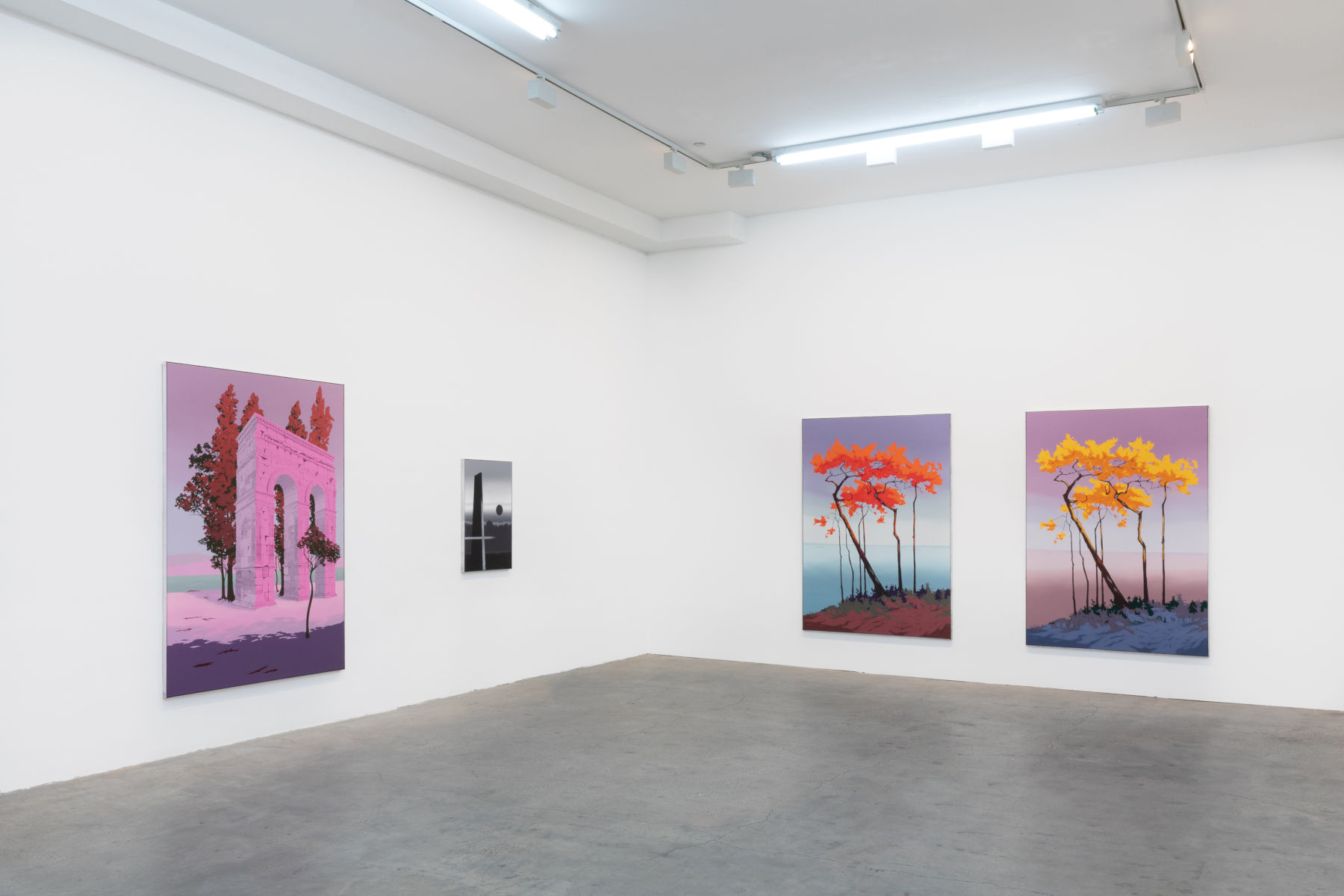 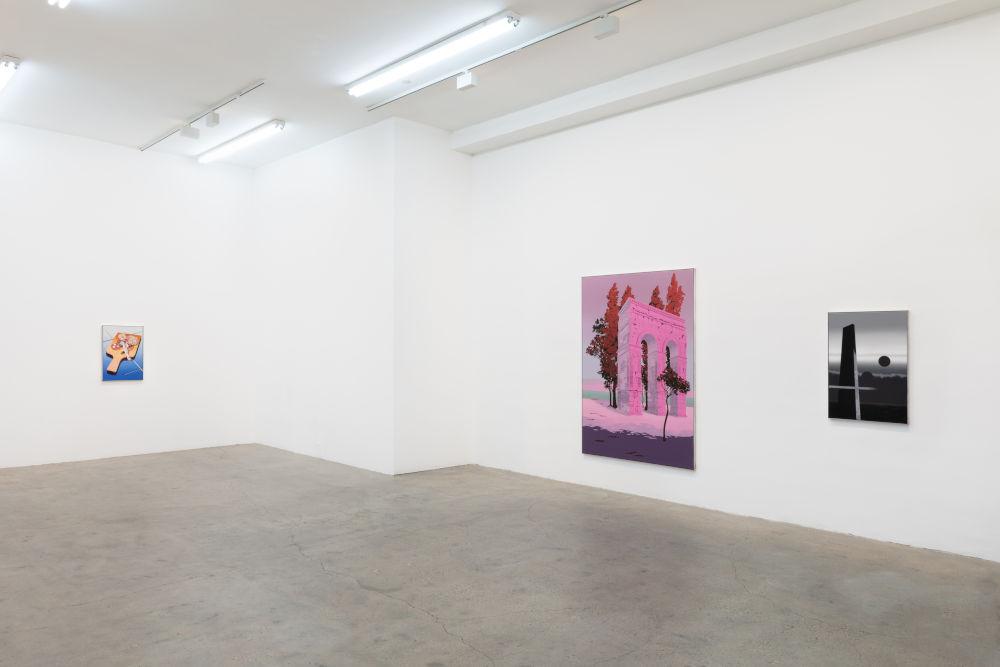 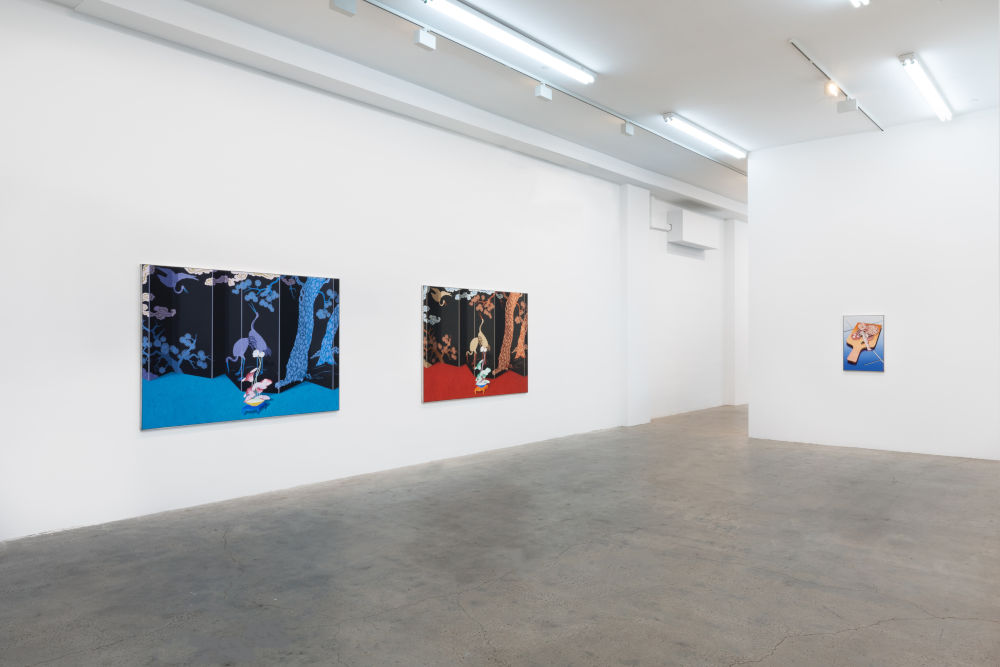 Presented at GRIMM New York are a new series of paintings by London-based artist Alex Dordoy. The title of the exhibition, Ruin is Rune, references ruins as a symbol of impermanence and an allegory for the fragile balance between humans and nature. The artist’s paintings—ethereal and austere with an intimate focus on their subject matter— are digitally edited so that their source material takes on new symbolic meaning. Multiple renderings of a single image suggest the passage of time; as light and color change, playing poetically across the surface of forms, the feeling is one of unnatural stillness.

Landscape is an important component in Dordoy’s paintings; it conveys themes of adventure, exoticism, nostalgia, and desire. However, these motifs are tinged with an ominous sensibility—as if we are presented with the remainders of a past from which we have been completely erased. The figure is conspicuously absent in each painting and instead swathes of color gradients occupy the canvas. This absence both beckons the viewer to picture themselves within these haunting spaces and elevates this perceived emptiness to become the subject matter itself.

Through this body of work Dordoy continues his investigation of a visual language rooted in imagery from early 20th century advertisements. Here the vernaculars of Art Deco and Object Poster design are combined with elements from Metaphysical and Post-digital strands of painting. Two works in particular, Nature Nurture and Nurture Nature, play with this layering of references. In these colorways a Japanese screen is translated to a printed poster, to JPG, and then returns to the physicality of painting, in order to serve as the wall of Plato’s cave to an impossibly healthy water lily. Stylised and reproduced, the landscape and flower have almost had all the unruliness of nature distilled from their being; and yet they persist, even as the light begins to fade.

About the artist
Alex Dordoy (b. 1985 in Newcastle, UK) lives and works in London (UK). He received his BFA from the Glasgow School of Art (UK) in 2007 and completed the residency program at De Ateliers, Amsterdam (NL) in 2009.
Recent exhibitions include Summer’s Ego at GRIMM Amsterdam (NL); The Moss is Dreaming at BlainSouthern in London (UK); From Svalbard Soil at The Modern Institute, Glasgow (UK); Model T at The Modern Institute, Glasgow (UK); Sleepwalker, Kunstmuseum, The Hague (NL) and Persistencebeatsresistance at Inverleith House in Edinburgh (UK). He has also participated in the following group exhibitions: Doodle & Disegno at BlainSouthern, Berlin (DE); Future Eaters, at the Monash University Museum of Art, Caufield East (AU); Use/User/Used, Zabludowicz Collection, London (UK); Crab Walk, Northern Gallery for Contemporary Art, Sunderland (UK); THE NOING UV IT, Bergen Kunsthall, Bergen (NO); and Office Space at the Yerba Buena Center for the Arts, San Francisco (US).
Alex Dordoy’s work can be found in many private collections, as well as the Zabludowicz Collection, London (UK) and New York (US); Kunstmuseum, The Hague (NL); the EKARD Collection; AKZO Nobel Art Foundation, Amsterdam (NL); Start Museum, Shanghai (CN); and the KRC Collection, Voorschoten (NL) among many others.