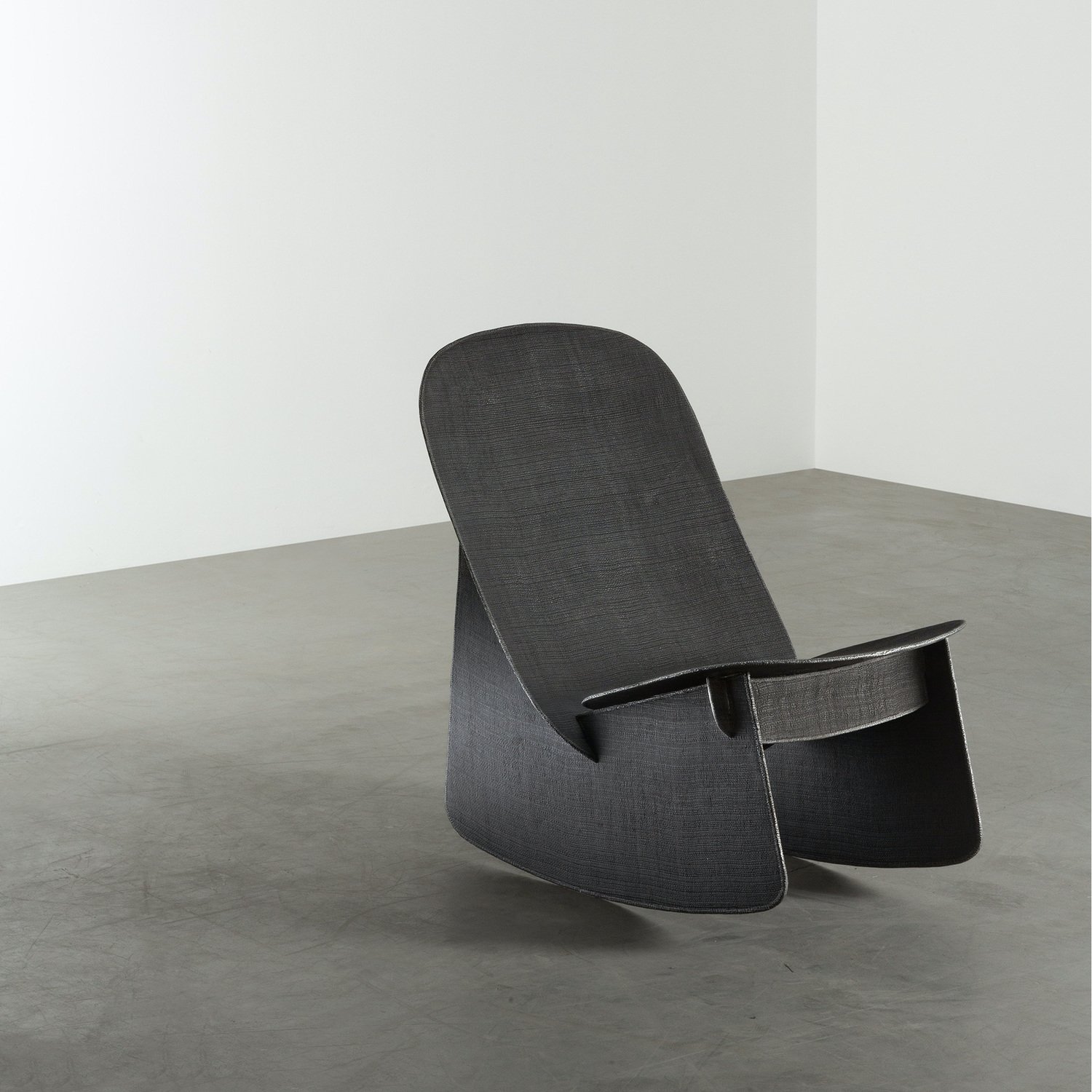 The French-Japanese duo have a cross disciplinary approach, fusing notions of traditional handwoven textiles with aluminium in a minimalist design aesthetic. Tiss-Tiss marks their first solo show in the UK and features a selection of nine works, of which eight are new, including chairs, a dining table, bedside tables, stools, a bench and lamps.

Each work exposes a relief of fabric on the surface and sewn stitch imprints on the edges which are cast in aluminium. They capture a moment in time during which the linen fabric was carefully laid out and emphasise the beauty of traditional hand-weaving techniques and resulting irregularity. The fluid impression of the textile imprint is juxtaposed to the architectonic, self-supporting structure of the rigid aluminium plates.

Aki and Arnaud developed a special manufacturing process which incorporates the process of sand-casting to achieve the appearance of intricate, handmade detail on the object’s surface. They mould a silicone duplicate of an original cardboard and linen master model, which they then sand-cast in aluminium, and dye blue, black or green. The duo experimented with this technique already in 2017 when their first Tiss-Tiss low chair which was awarded the Liliane Bettencourt Prize for l’intelligence de la main (the intelligence of the hand). It took them almost four years to develop the process, further resulting in a large amount of works which complete the Tiss-Tiss collection. The exhibition at Carpenters Workshop Gallery will allude to the process as the works will be displayed on a bed of sand.

The Tiss-Tiss Ishigaki Lamp marks a break from the use of aluminium to textiles, copper foil and resin to create playful shadows in the surrounding spaces. Inspired by Arnaud’s free-diving trips in Ishigaki island in Japan, the shadows replicate the feeling of being underwater, and highlights a new direction for the couple’s future designs.

The combination of metal foundry and textiles were familiar practises to Aki, whose father Shinji Naoi, was a silversmith and student of Keisuke Serizawa, the “Living National Treasure of Japan” in the field of silkscreen textile. Naoi is unique in practicing casting silver using the technique of lost wax casting in the district of Ginza, Tokyo, a process by which a metal duplicate is cast from an original sculpture. Aki’s long standing familiarity of such artistic practises and fascination for Mingei, an artistic movement in mid-1920s Japan, combined with Arnaud’s fresh gaze for contemporary Japanese culture and experience in contextual installation at La Cambre art school has helped to create the unique artistic vision for the Tiss-Tiss collection.

Aki + Arnaud Cooren, who have a background in industrial design, comment: “Creating the Tiss-Tiss collection, we were inspired by Keisuke Serizawa’s Waterfall piece and how he manages to capture a moment in time. Also the Buddhist philosophy of Impermanence is an important influence to us. All that exists is impermanent; nothing lasts. By capturing the fluidity of the linen material and placing natural elements onto manufactured aluminium, we give the illusion that things aren’t always as they seem. There’s no beauty without imperfection.”