Adrian Ghenie: The Fear of NOW

Adrian Ghenie: The Fear of NOW


New oil paintings and charcoal drawings by acclaimed artist Adrian Ghenie are presented at Thaddaeus Ropac in his most extensive exhibition in London for almost a decade. The Fear of NOW reflects a key shift in the artist’s themes and practice. 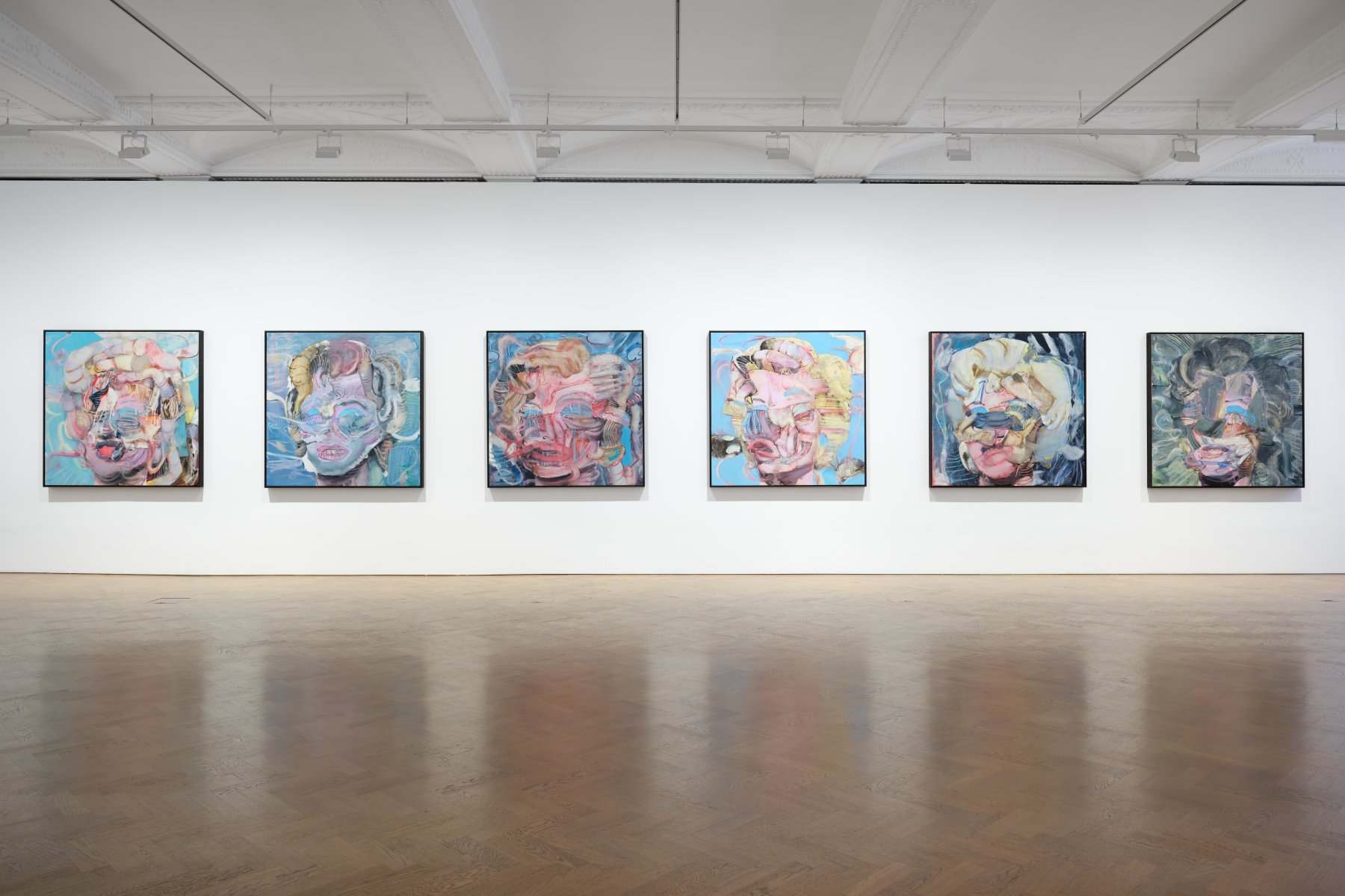 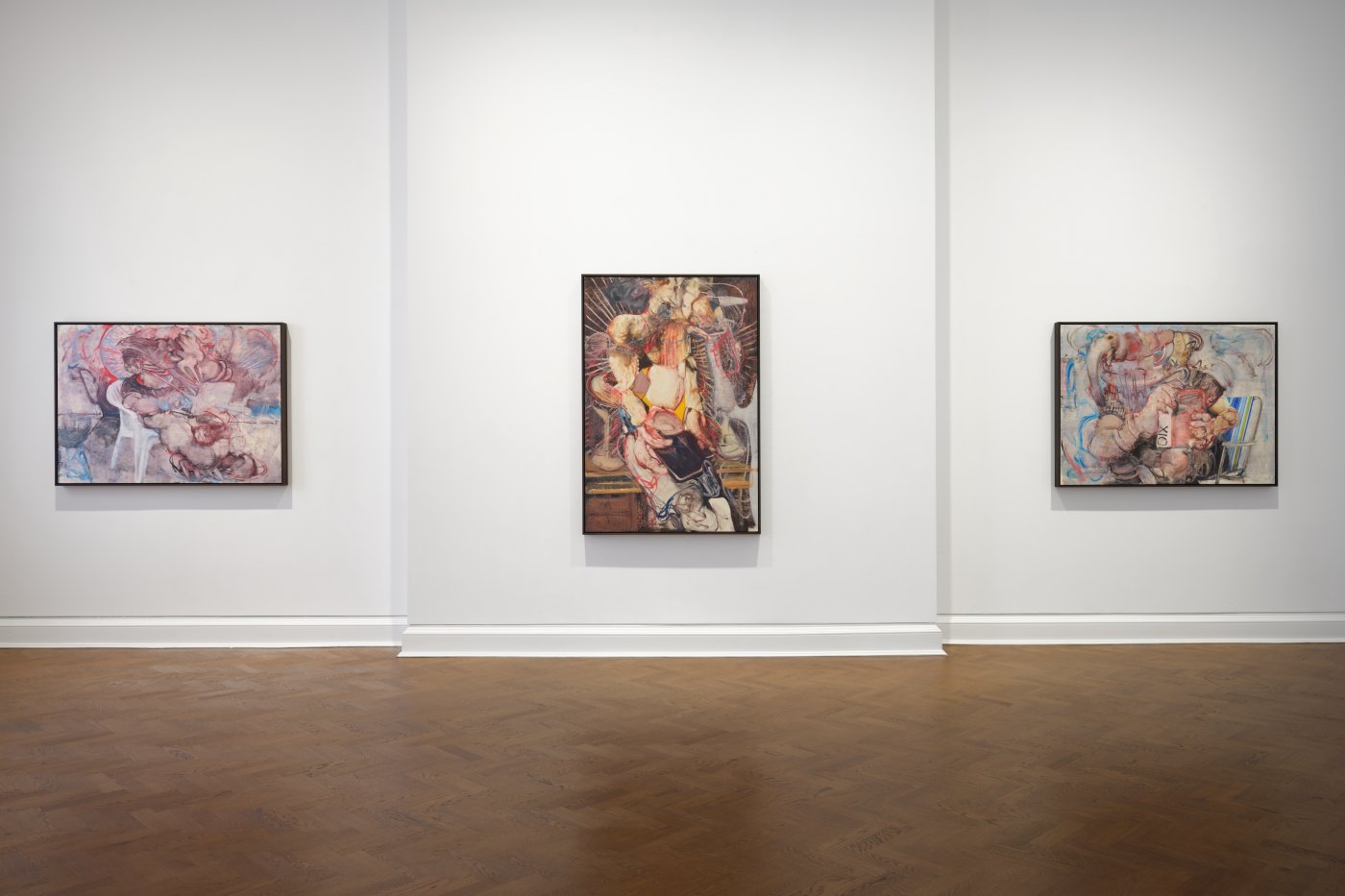 Revisiting his enduring interest in portraiture through a group of figurative works, Ghenie records the impact of the Digital Era on the human condition and its physiological effects on the body. In turn, a group of paintings portraying the American icon Marilyn Monroe examines the multifaceted personas of public figures that constitute, what the artist terms, the ‘soup of fame’. Together, these two bodies of work offer a powerful reflection on the transformation of contemporary society.

Struck by the way bodies are increasingly oriented around mobile phones and laptops, Ghenie identifies a seismic shift in body language that foregrounds the intrusive influence of the digital world. Heads and torsos are bowed over screens, while hands clutch at portable devices in an expression of the new bodily relationship with technology.

The group of paintings depicting Marilyn Monroe exposes another aspect of technological development in contemporary society: its complex relationship to fame and the dissemination of images. Ghenie disrupts the smooth surfaces of Andy Warhol’s iconic screenprints based on the publicity shot of Marilyn for the 1953 film, Niagara. He rearranges the facial features of the Hollywood actress in a grotesque fashion, using his distinctive painterly language to move beyond the superficiality of her public image. In so doing, he penetrates the veneer of fame in a mode that he aligns with a European, rather than an American, artistic sensibility.

Ghenie uses the Marilyn series to investigate the three interconnected personas he ascribes to figures operating in the public sphere. Reflecting on his own experience in the art world, he describes these as the real artist, the artist working in the studio, and the myth of the artist as received by the public and depicted in popular media. The portraits of the Hollywood star consequently become vehicles for his deeply personal investigation of identity in the context of the digitally saturated ‘NOW’.

The title of the show conveys Ghenie’s apprehension about the role of online culture in today’s social interactions. Abstaining from social media platforms, the artist chooses to place himself ‘out of the social loop’. The Fear of NOW encompasses his relationship with, what he describes as, ‘this new way of communicating which now everybody uses and I’m not in.’

The painting, Figure with remote control (2022), asserts the continued significance of self- representation within this new body of work. Ghenie frequently inserts himself in his art, both in the form of self-portraiture and in the guise of well-known individuals, including Charles Darwin and Vincent van Gogh. In this new painting, the figure is abstracted almost beyond recognition. The body twists towards a television screen as a hand grasps a remote control, establishing a connection between the human and technology. The work is only recognisable as a self-portrait from the artist’s signature Nike trainers, which recur as a motif throughout his oeuvre.

The body of work presented in the exhibition demonstrates an experimentation with new mediums and techniques employed by Ghenie to explore the shifting repertoire of body poses he associates with the Digital Age. Earlier paintings by the artist are characterised by highly textured impasto and thick, gestural sweeps of paint applied with a palette knife. In contrast, the works in The Fear of NOW represent a more linear approach to painting, building upon recent developments in his drawing practice, represented by the works on paper. Charcoal is applied to a surface primed for oil paint, allowing the artist to erase and rework his mark making in an approach he terms a ‘drawing based on mistakes’ – a process he simultaneously reimagines with paint on canvas.

The idiosyncratic figurative language developed by Ghenie in these drawings and large-scale paintings draws upon diverse art historical and contemporary cultural references: from the work of Otto Dix and George Grosz, to the cartoon-like style of Philip Guston and popular animated series such as Rick and Morty. The composite, monstrous figures achieved through this process of accumulation are arranged around their electronic devices, entwining the corporeal with the digital in a reflection of today’s preoccupation with technology.

One of the most celebrated painters of his generation, Adrian Ghenie fuses the profoundly personal with the art historical, along with the political, as he bridges the abstract and the figurative in his dynamic body of work. He engages, not only with the history of painting, but with ‘painting the texture of history’, frequently depicting the personalities whose actions have defined its course. Investigating the possibilities of his chosen mediums is always central to Ghenie’s practice and, by fusing the grand themes and narratives of historical painting with contemporary forms, his works are not solely about their specific subject-matter, but the act of painting itself.

The artist reconfigures personal memories, art historical references, film stills and visual media culled from the internet in the imagery of his work. Ghenie’s process has previously involved creating collage compositions: cutting out and fusing composite images which are then transferred to canvas with a palette knife, using gestural strokes to create tactile surfaces. In his latest work, the artist has achieved a similar process of accumulation using an innovative drawing technique. He erases and reapplies charcoal to paper to build multifaceted images, which are then reimagined on canvas using a thin brush. His deconstructed pictorial language often contains references to his artistic predecessors, including Théodore Géricault, Henri Rousseau and, in his hybrid self-portraits, Vincent van Gogh.

Born in 1977 in Baia Mare, Romania, Ghenie lives and works in Berlin. He was selected to represent Romania at the 56th Venice Biennale in 2015 and, more recently, had solo exhibitions in 2019 at the State Hermitage Museum, Saint Petersburg and the Palazzo Cini, Venice. In 2022, two site-specific paintings by the artist were permanently installed in the historic setting of Chiesa della Madonna della Mazza, Palermo in an independent project curated by Alessandra Borghese. The artist has created several installations conceived as a ‘room within a room’ – The Dada Room (2010), now in the permanent collection of S.M.A.K., Ghent, and The Darwin Room (2013–14), in the collection of the Centre Pompidou, Paris. His previous solo exhibitions include shows at Galerie Judin, Berlin (2021); Tim Van Laere Gallery, Antwerp (2020); Villa Medici, Rome (2017); CAC Málaga, Spain (2014); Museum of Contemporary Art, Denver (2012); Stedelijk Museum voor Actuele Kunst, Ghent (2010); and the National Museum of Contemporary Art, Bucharest (2009). He has also participated in exhibitions at the Centre Pompidou, Paris (2016); Fondation Vincent van Gogh, Arles (2016); San Francisco Museum of Modern Art (2012); Palazzo Grassi, Venice (2011); and Tate Liverpool (2008), among others.