“I used to be really nervous. Here I am on a new path: I put an apple on my table.
Then I put myself inside this apple. How peaceful it feels!”
(1) 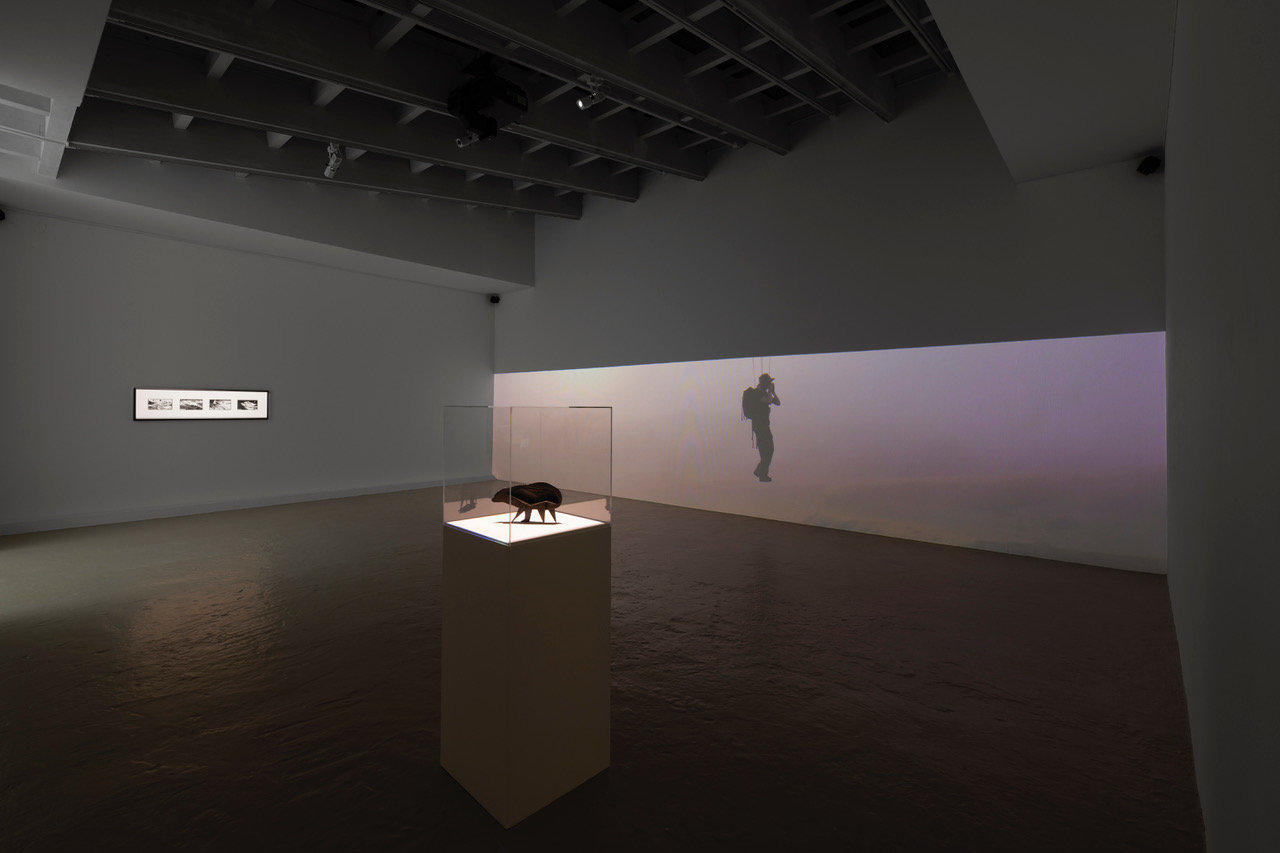 In his collection of poetry, published in 1938 and entitled Lointain Intérieur, Henri Michaux puts his protagonist inside an apple. A contracted form of the infinite, the apple appears as an inner space, taking on a new dimension: that of time, a comforting refuge and a restricted space of reassuring isolation. In a similar way to Henri Michaux, Abraham Poincheval, with all the humor and absurdity that characterize his artistic practice, stages himself inside an animal or a beehive or a stone. For his performance Ours (Bear) in 2014, he decided to inhabit a stuffed bear for thirteen days in the Musée de la Chasse et de la Nature in Paris. Plunged into a state of near hibernation due to the cramped space inside the animal and the absence of natural light, he took his performance to the extreme by consuming only what a bear would naturally eat.

“When I entered the apple” wrote Michaux, “I was frozen”. Isolation and inner journeys can also be found in Abraham Poincheval’s performance Pierre, presented in 2017 at the Palais de Tokyo, for which a limestone block had its center carved out to marry the shape of the artist’s body. Similarly, when he decided to inhabit a replica of the “Lion-man” (Löwenmensch), a well-known statue from the Aurignacian period, seen as a sort of Trojan horse by the artist, the radicality of the physical experience of confinement, accentuated by the ritual aspect of cloistering, represented a voyage to the heart of the world.

While Abraham Poincheval’s work certainly resembles the existence of a claustrophile hermit, it is also that of an insatiable explorer. Possibly echoing Mount Analogue, the unfinished novel written by René Daumal between 1939 and 1944, the artist appears to be at once searching for an original center, a world, a tree that has risen from the earth and reached the sky, and a sacred mountain. It is this very idea of the symbolic possibility of communication with the beyond that seems to infuse both the novel and Poincheval’s work. Daumal’s fictional ascent of the sacred mountain, like Poincheval’s elusive conquests, are the result of their authors’ spiritual progression, an initiatory journey towards a mysterious and invisible summit, the object of every fantasy. For his performance Gyrovague (2011), which takes its name from the itinerant, solitary pilgrimages of Christian monks who travelled from one monastery to another without ever settling, the artist decided to cross the Alps from Digne-les-Bains to Caraglio, pushing a large metal cylinder as his Sisyphean rock, in which he would take shelter. For his 2019 video, Walk on Clouds, Abraham Poincheval, hanging from a hot air balloon, wandered above the cloud canopy, exploring a moving sky tinged with psychedelic colors. This video conjures up the conquest of an intangible territory, and the projection of this fantastic, imaginary world strangely evokes the Alejandro Jodorowsky’s film adaptation of Mount Analogue: The Holy Mountain (1973).

“The Hollow-Men live in solid rock and travel within it like moving caverns. In the ice they appear as bubbles in the shape of men. But they never venture out into the open air, for the wind would blow them away. They have houses in the rock, whose walls are made of holes and tents in the ice, whose canvas is woven from bubbles. During the daytime they remain in the stone and at night they wander through the ice and dance to the full moon. But they never see the sun, otherwise they would simply burst.”(2)

Martha Kirszenbaum (b. 1983, Vitry-sur-Seine, France) is a curator and writer based in Paris and Los Angeles. She graduated from Sciences-Po in Paris and Columbia University in New York with an M.A. in Political History and Cultural Studies. Kirszenbaum is the Curator of the French Pavilion of the 58th Venice Biennale represented by Laure Prouvost. She founded and directed Fahrenheit, an exhibition space and residency program in Los Angeles (2014-17). Previously she acted as the Associate Curator at the Kunsthalle Mulhouse (2014) and as Curator-in-Residence at the Belvedere Museum/21er Haus in Vienna (2012) and at the Center for Contemporary Art in Warsaw (2010). She also worked at the New Museum in New York (2008-10), the Photography Department of Centre Georges Pompidou in Paris (2007) and the Media Department of MoMA in New York (2006-07). Kirszenbaum has organized exhibitions, screenings, performances and talks at renowned international institutions such as the ICA in London, Palais de Tokyo in Paris, Astrup Fearnley Museet in Oslo, Kunstall Stavanger, Beirut Art Center, Fondation Ricard in Paris, 221A in Vancouver, Kadist in Paris / San Francisco, Pejman Foundation in Tehran, Los Angeles Contemporary Exhibitions, Marrakech Biennale, Istanbul Biennale, and the Austrian Cultural Forum NY. She is a regular contributor to Flash Art, Mousse, CURA and Kaleidoscope among other publications, and has led seminars at UCLA, Université Paris VIII, Parsons in Paris and UCLA. She was on the jury for the Estonian Pavilion of the 57th Venice Biennale, the Jan Van Eyck Academy, Rencontres d’Arles Prix Découverte, and Cité Internationale des Arts.