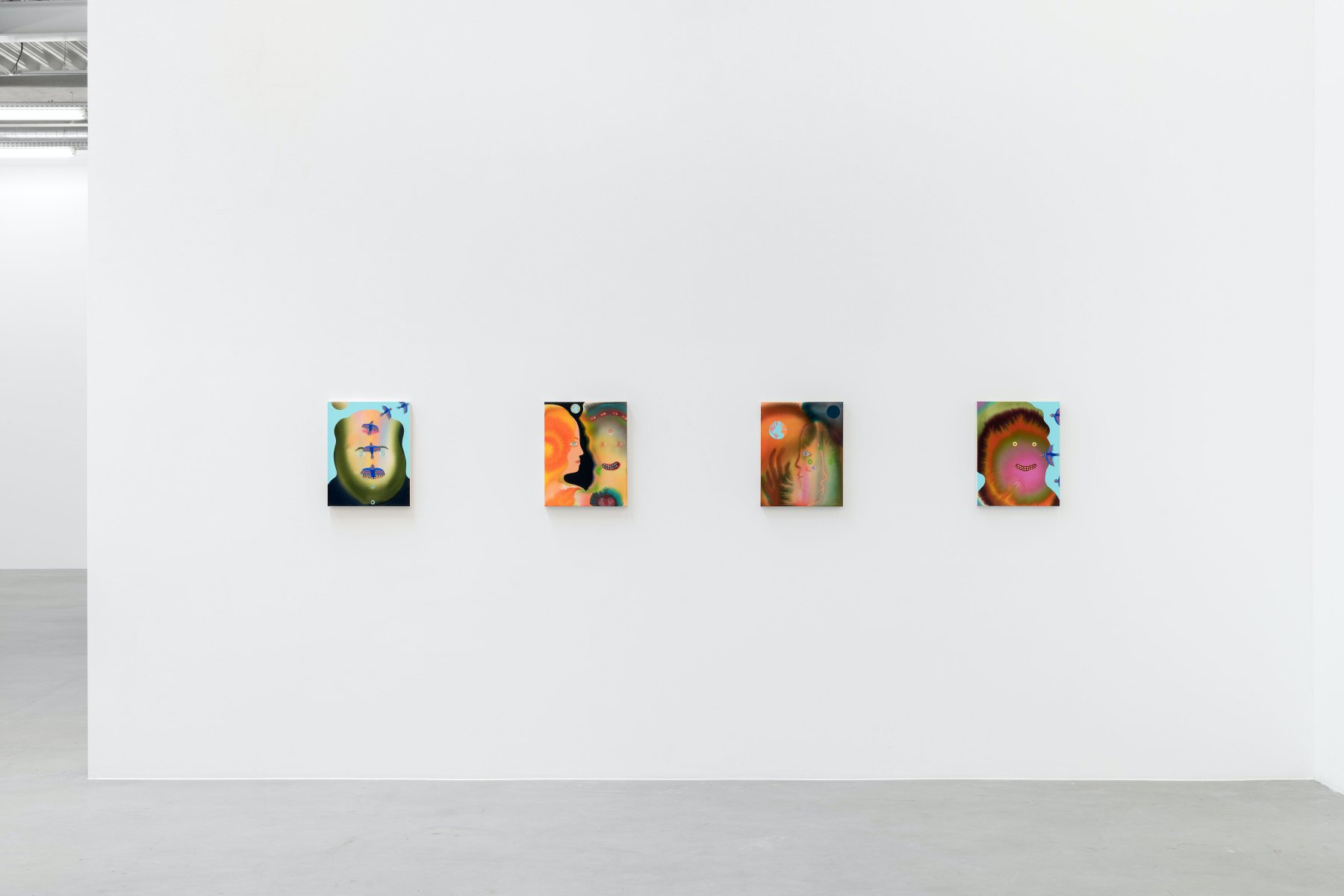 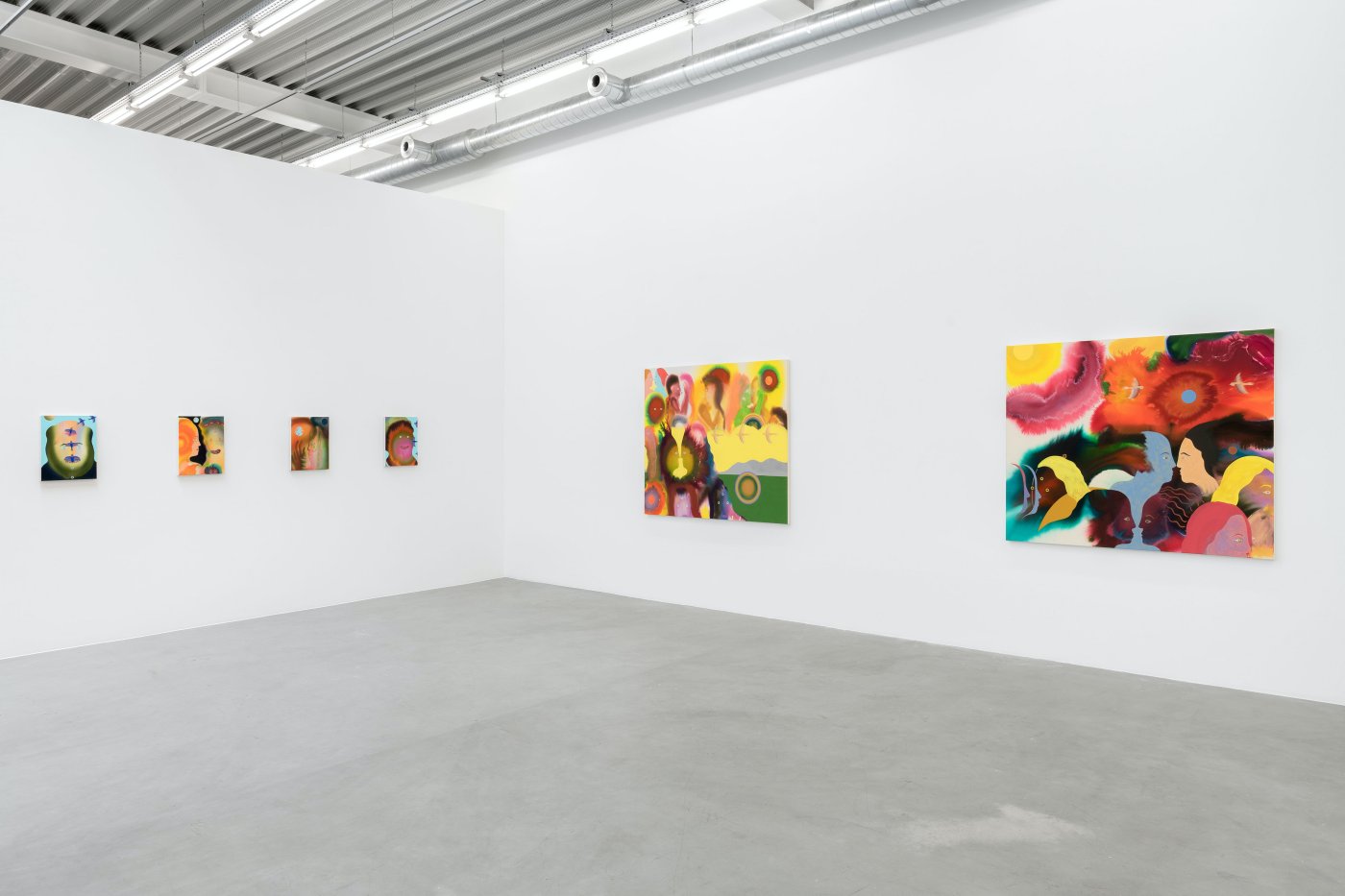 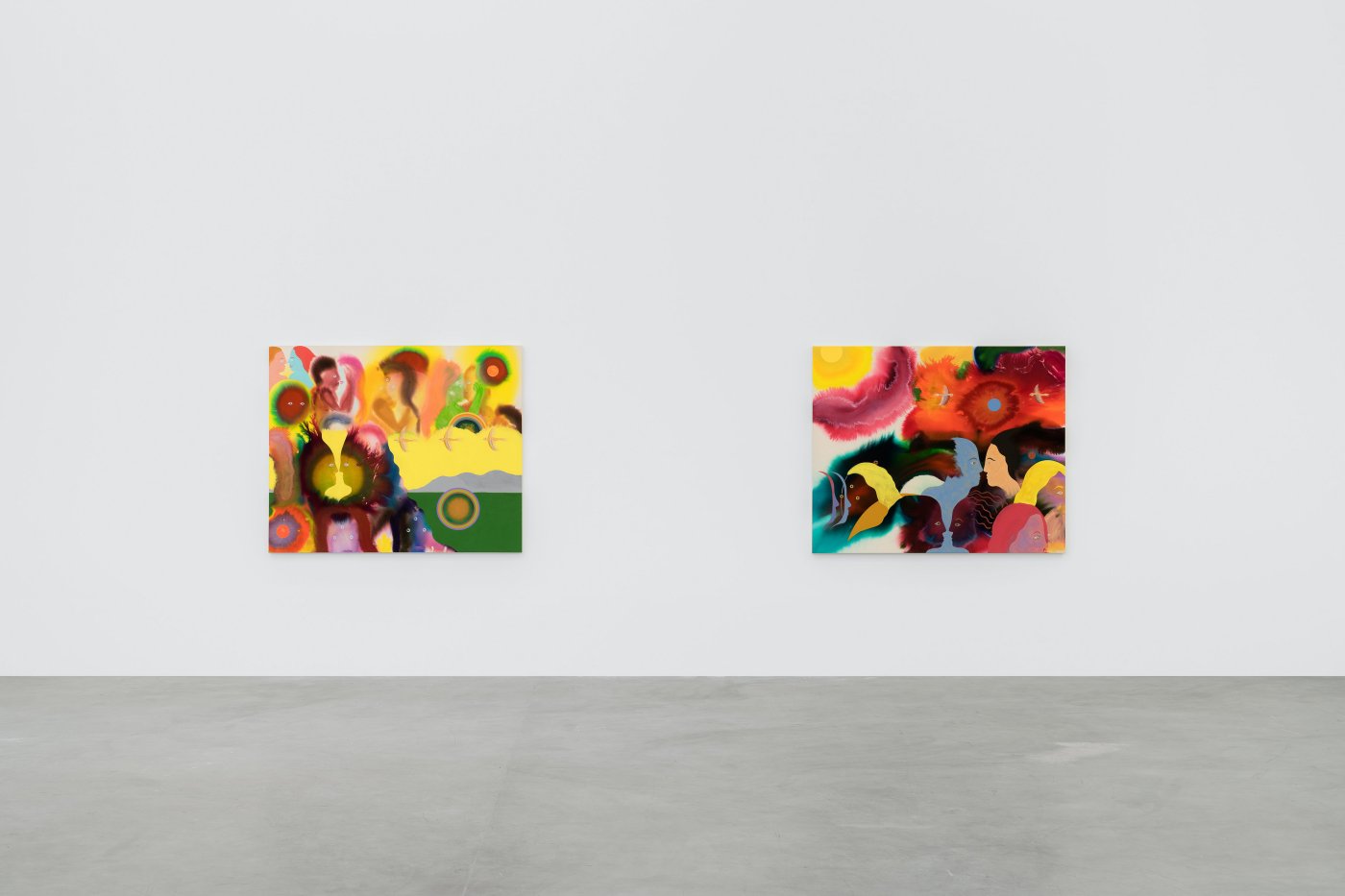 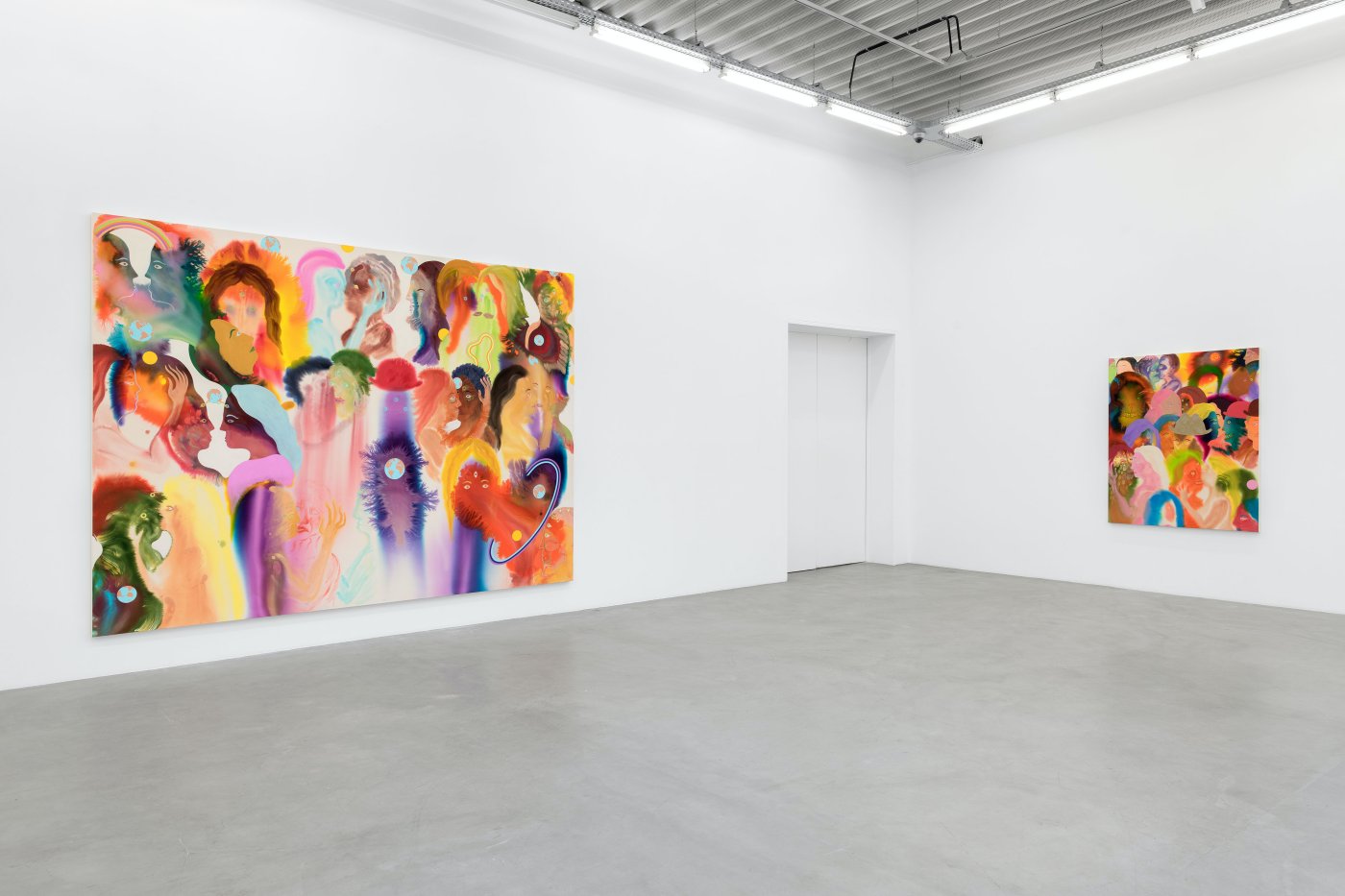 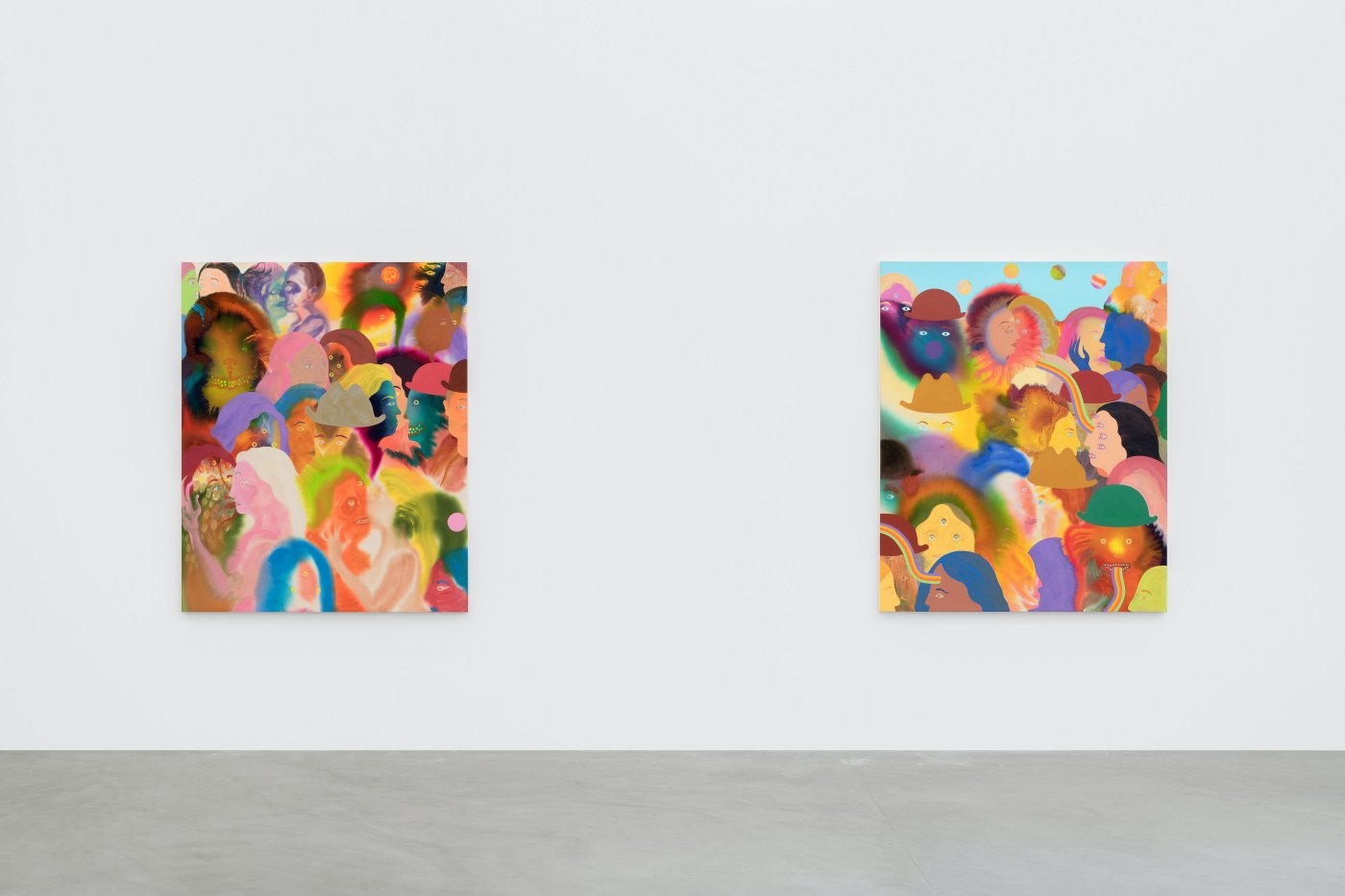 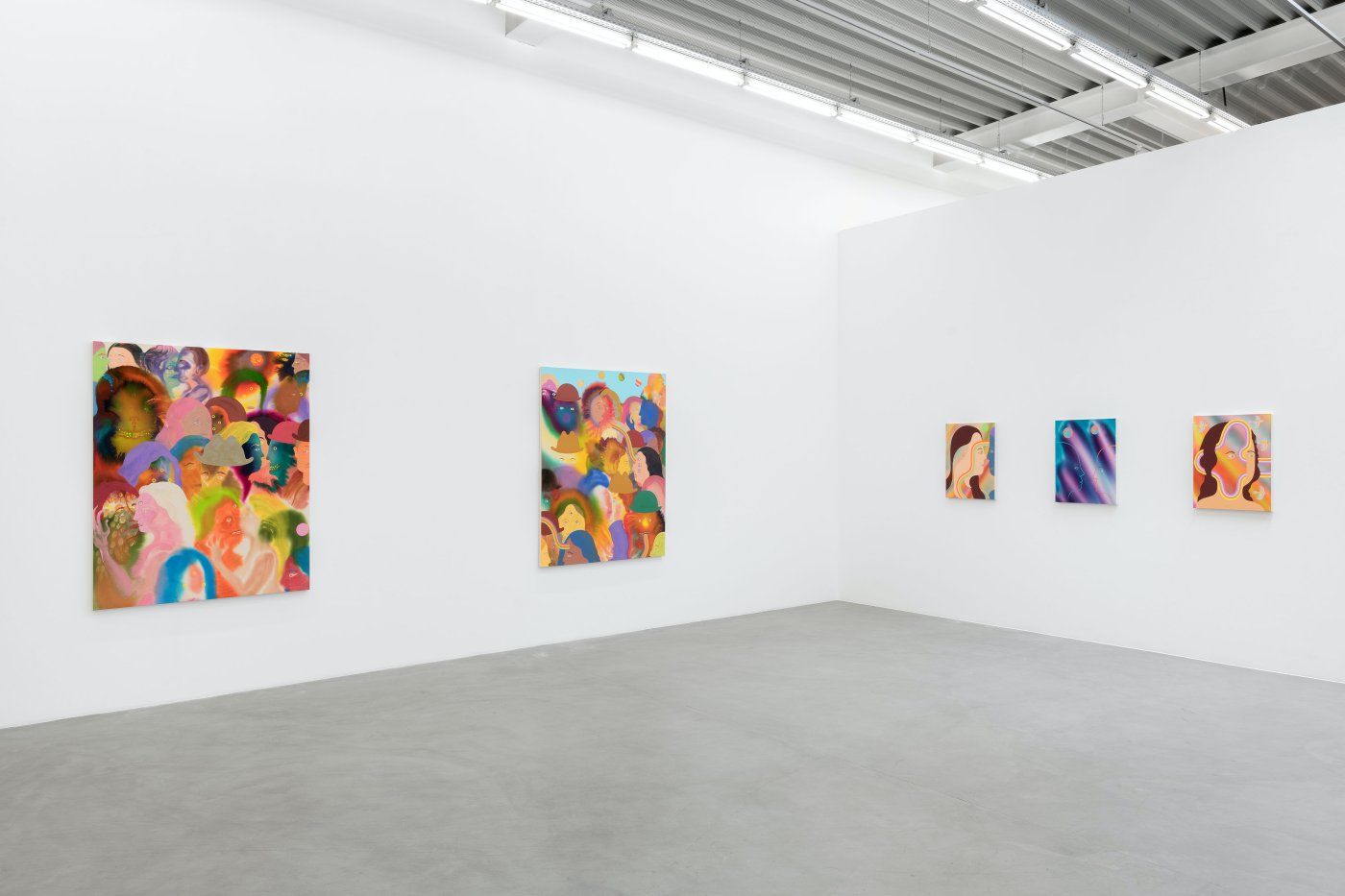 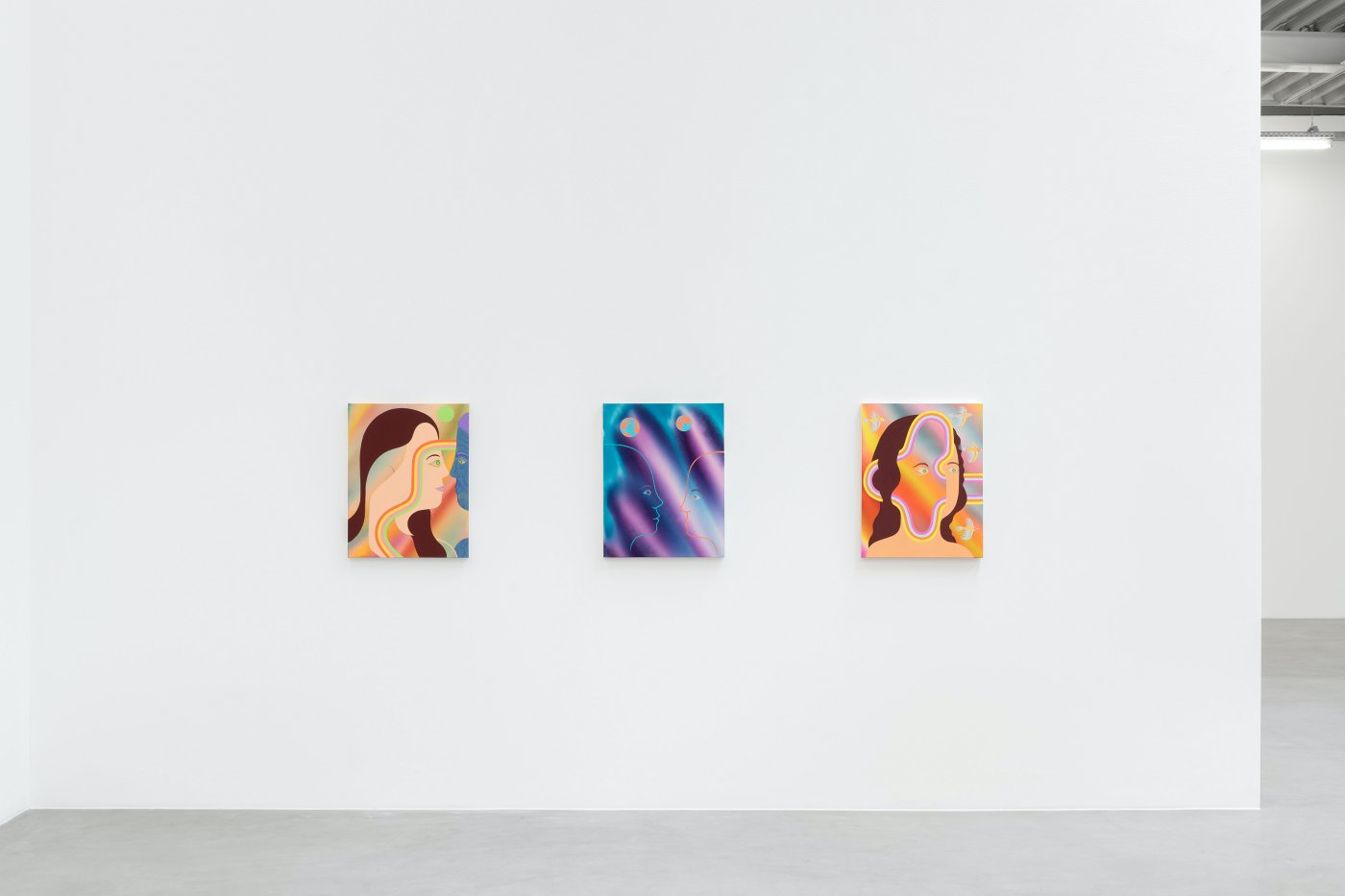 Allegory, the grotesque, humor and esotericism animate the paintings of New York-based artist Aaron Johnson, whose new body of work oscillates between genre painting, portraiture and landscape painting. Other Earths consists of five large canvases and a set of small, brightly colored works populated by a host of imaginary characters and monstrous figures.

The luminous, fluid and heterogeneous nature of Johnson’s oeuvre is owed above all to a singular creative process. He inherited this practice from Color Field stain painting, pioneered by Helen Frankenthaler and continued by Morris Louis, emblematic artists of American Abstract Expressionism. The artist first spreads his blank canvases out on the floor of his studio, paints a few motifs, and lets highly diluted liquid paint spill out in various shades; then, he lets the laws of chemistry and physics do their work. Thus begins Johnson’s work of improvisation, which centers on immediacy and letting go. His choices and gestures respond to the random movement of the diluted matter and its unpredictable accidents, prolonging them. He adapts the composition over successive mutations and gradations, with motifs and figures appearing and disappearing.

For the next stage, Johnson hangs the canvases on the wall to add defined and sharply contoured forms, using minimalistic color blocking and a number of meticulous detailing. The striking contrasts between the vibrant, organic paint and the sparseness of form within this second phase are a testament to his unparalleled talent as a colorist. By multiplying the pictorial strata, the artist’s work brings figuration and abstraction into a dynamic of resonance, with characters often resembling abstractions and angelic or ghostly presences.

The grotesque, which is central to Johnson’s work, draws on a broad spectrum of historical influences ranging from Goya’s Witches’ Sabbath to the acidic social satire of James Ensor; from Kirchner’s expressionistic crowded street scenes to the unbridled and whimsical figuration of Peter Saul. The rich spectrum of characters that Johnson brings together include beings with three eyes, as if out of Buddhist or Tibetan iconography; creatures halfway between the monstrous and the comic; lovers embracing under a burning sky; couples in seemingly telepathic communication before a multicolored mountain landscape; or falcons whose flight is an allegory of the passage from the terrestrial world to the spiritual world. Immersed in these psychedelic landscapes, his creations are interconnected, merged with each other, with the landscape and cosmos, and bear witness to the possible existence of other worlds. Johnson thus adopts a highly narrative approach to painting, inhabited by the metaphysical and esotericism, where humor is never far away.

In fact, the hallucinatory mysticism of the artist’s work is always accompanied by the quest for a better community life, which is the ultimate allegory at play here. A quest that, he points out, is furthermore rooted in the reality of our contemporary world: disrupted by political and environmental crises, profoundly transformed by the pandemic we are experiencing, and giving rise to a deep need to “be together”. In his painted world, where chimera, chaos and collective consciousness coexist, where painting itself plays the leading role, Aaron Johnson invents a flamboyant humanistic alchemy.

Courtesy of the artist and Almine Rech. Photo: Hugard & Vanoverschelde