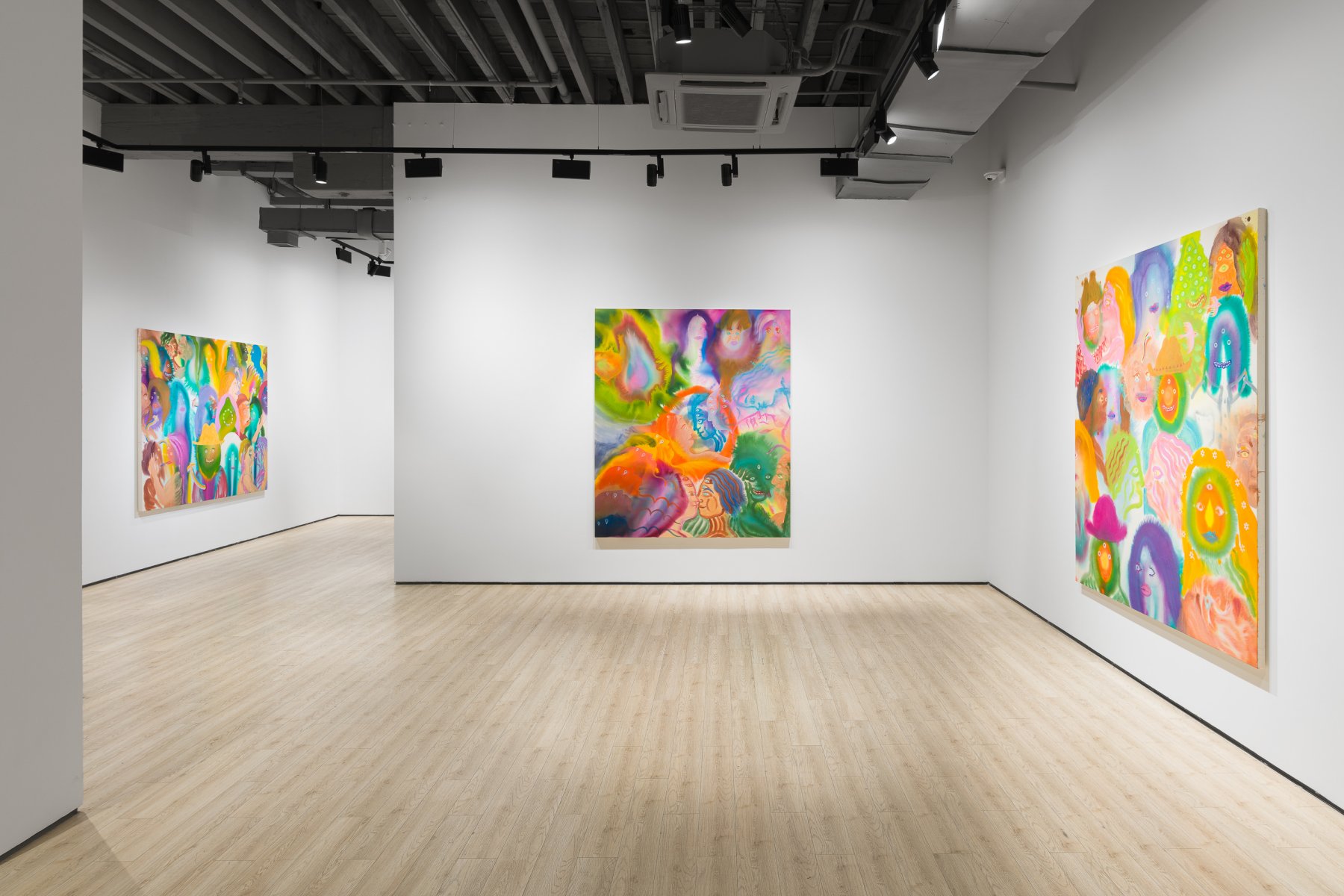 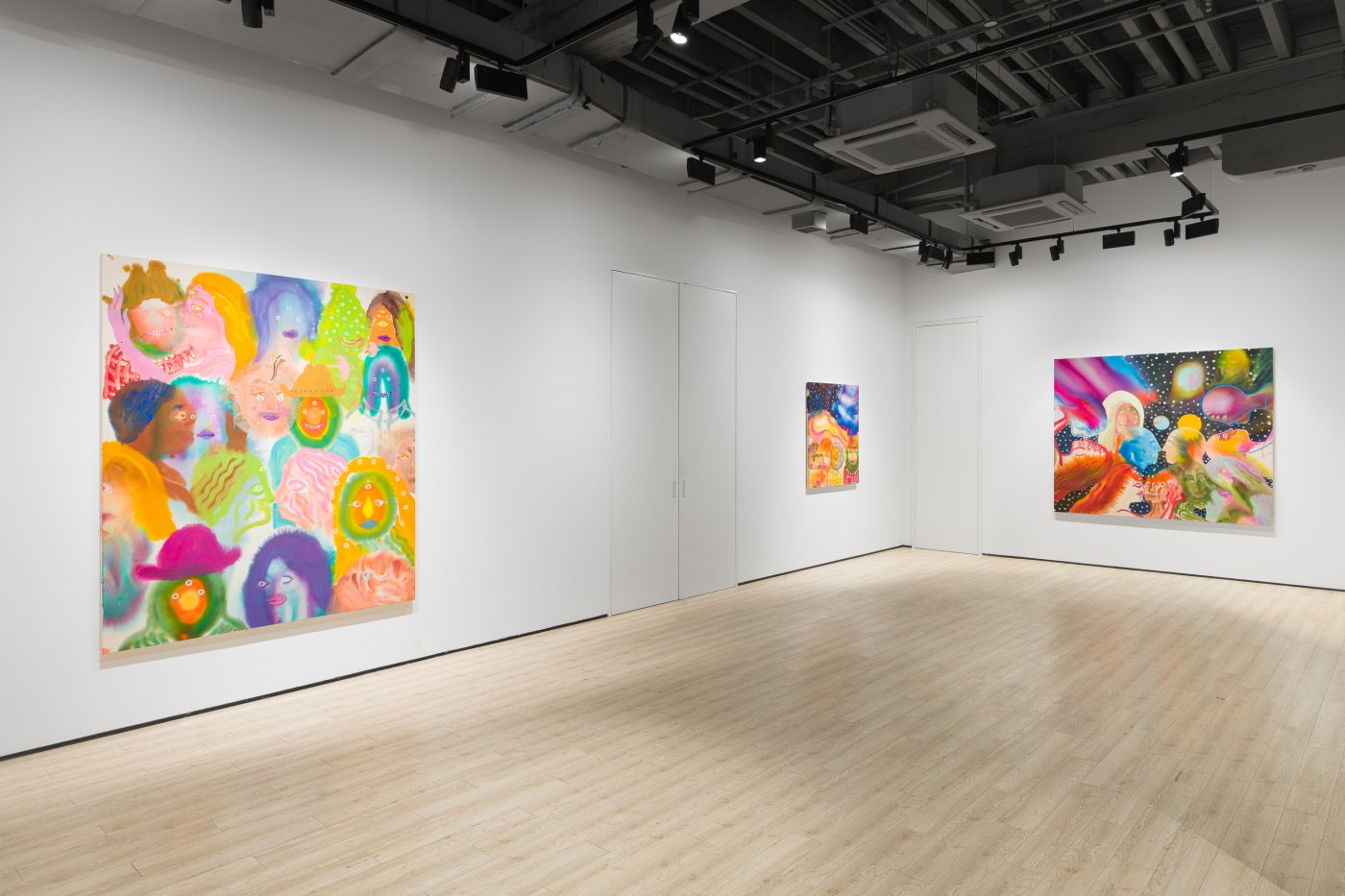 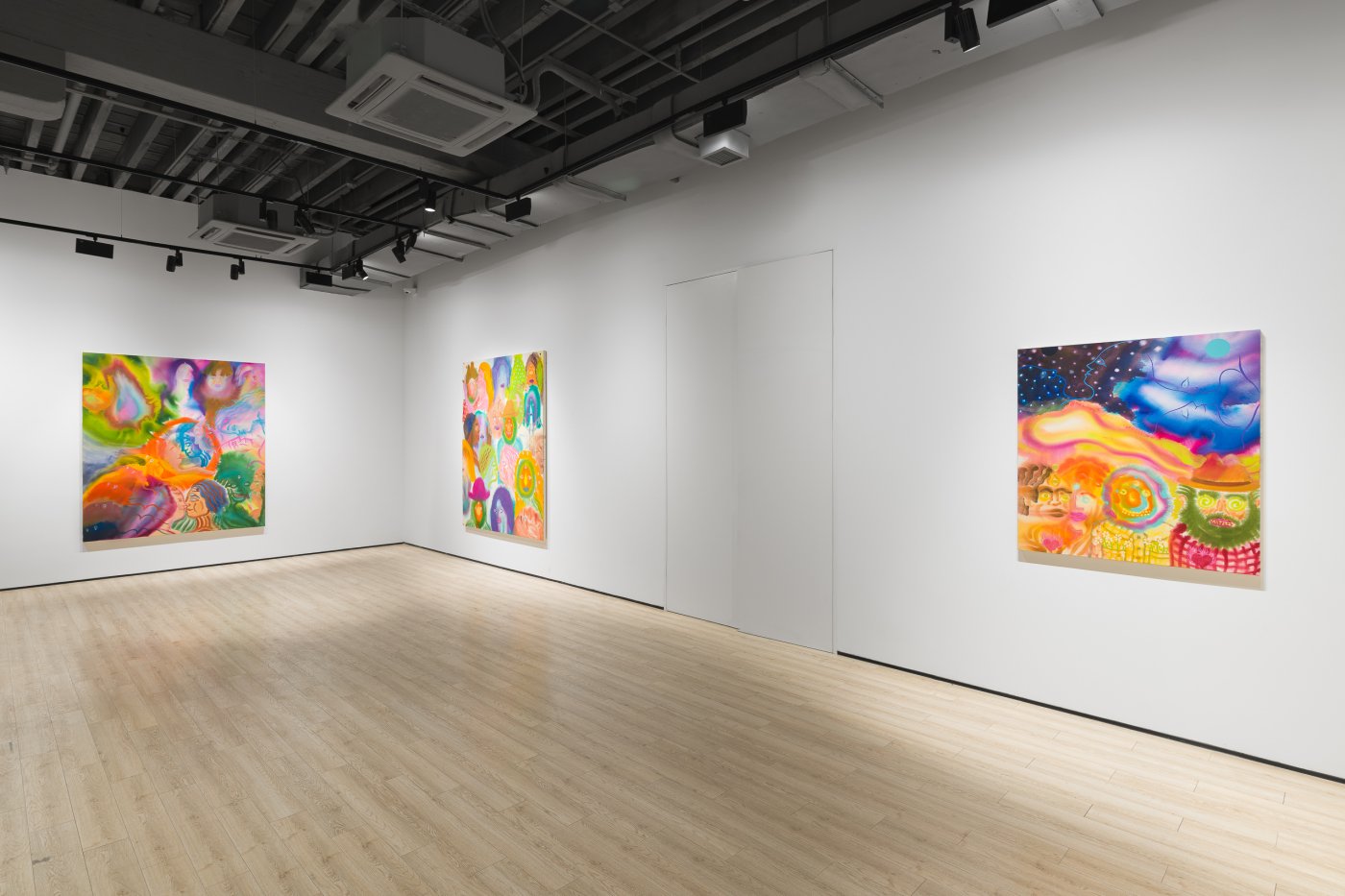 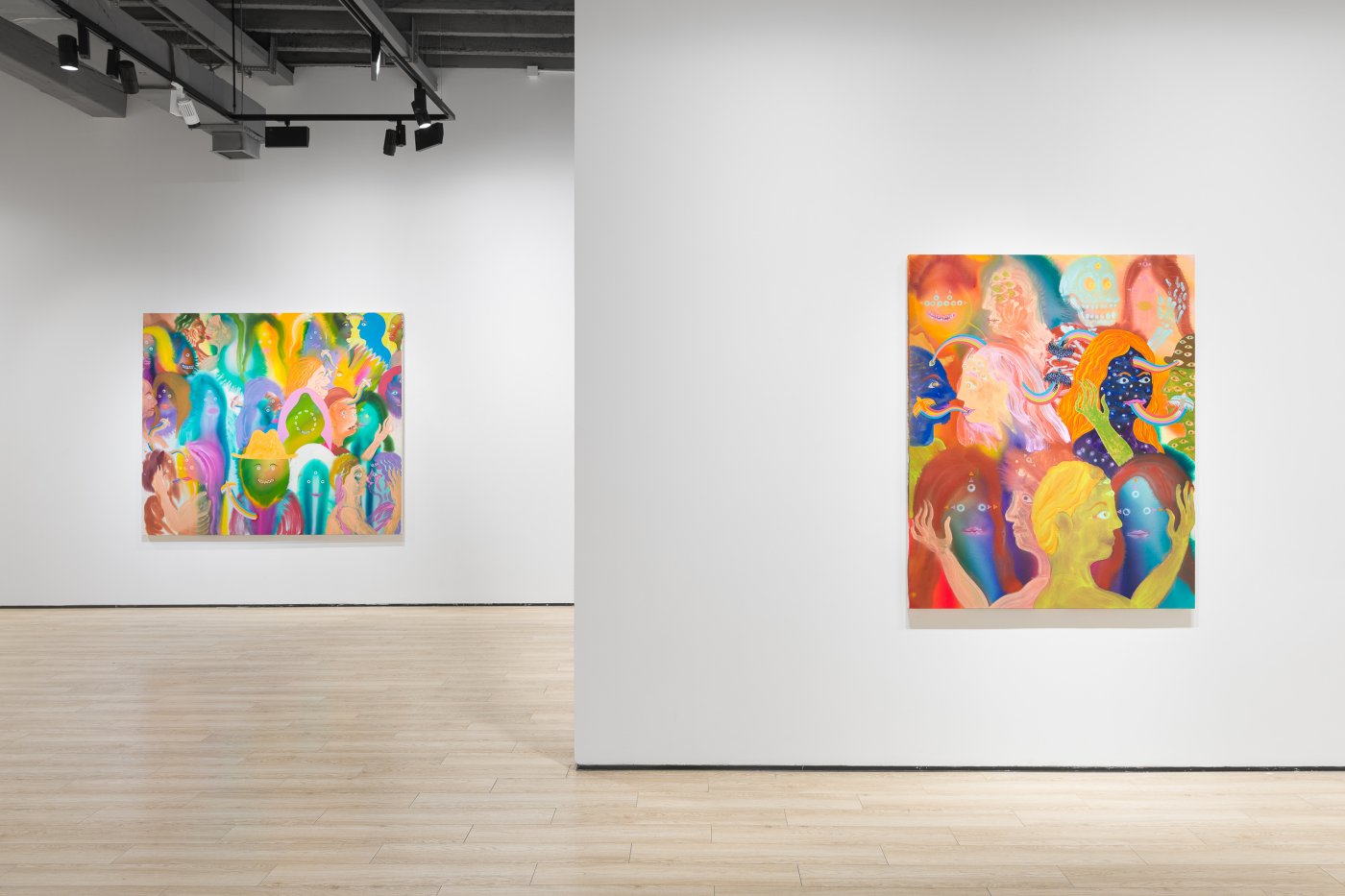 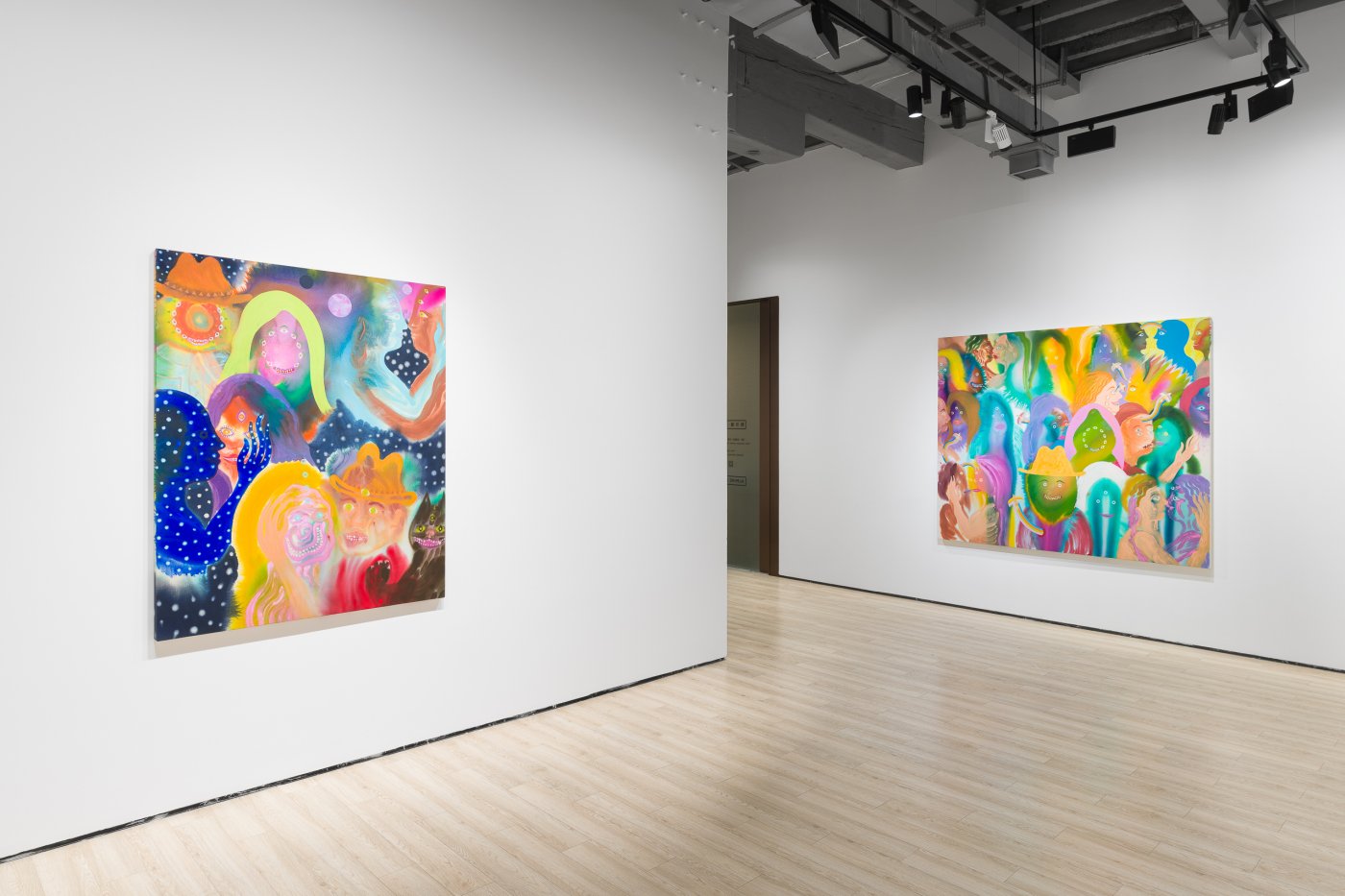 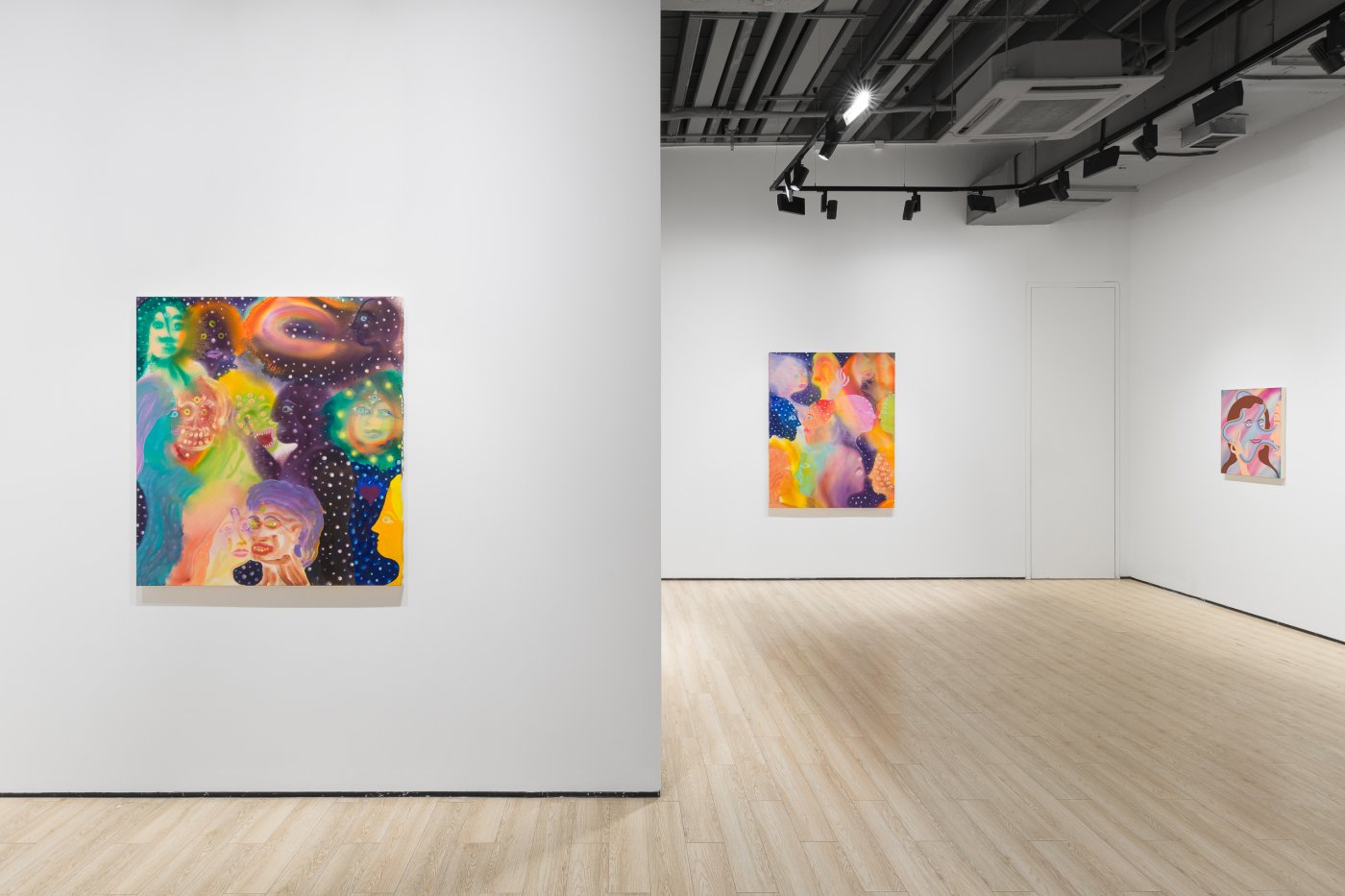 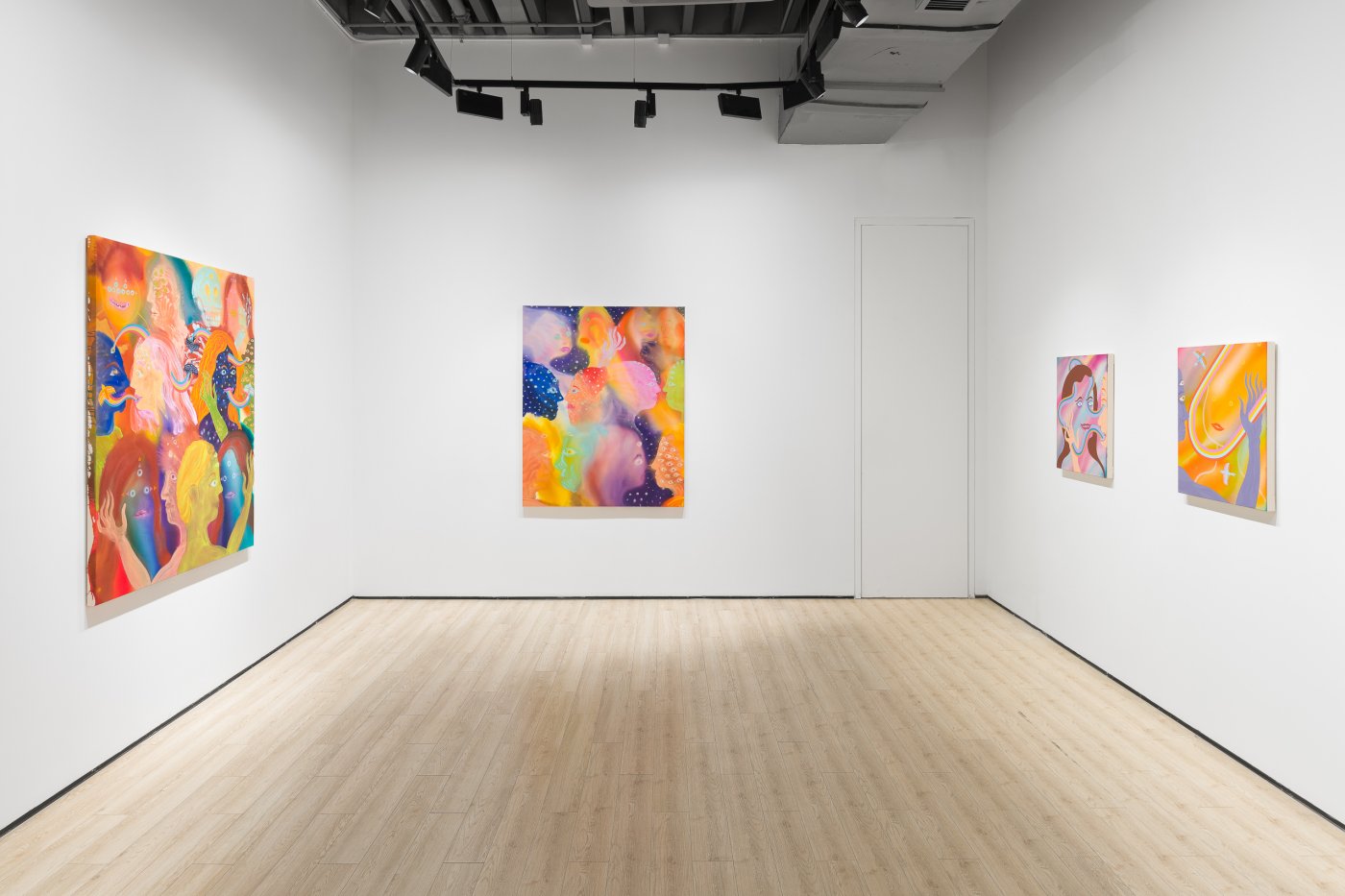 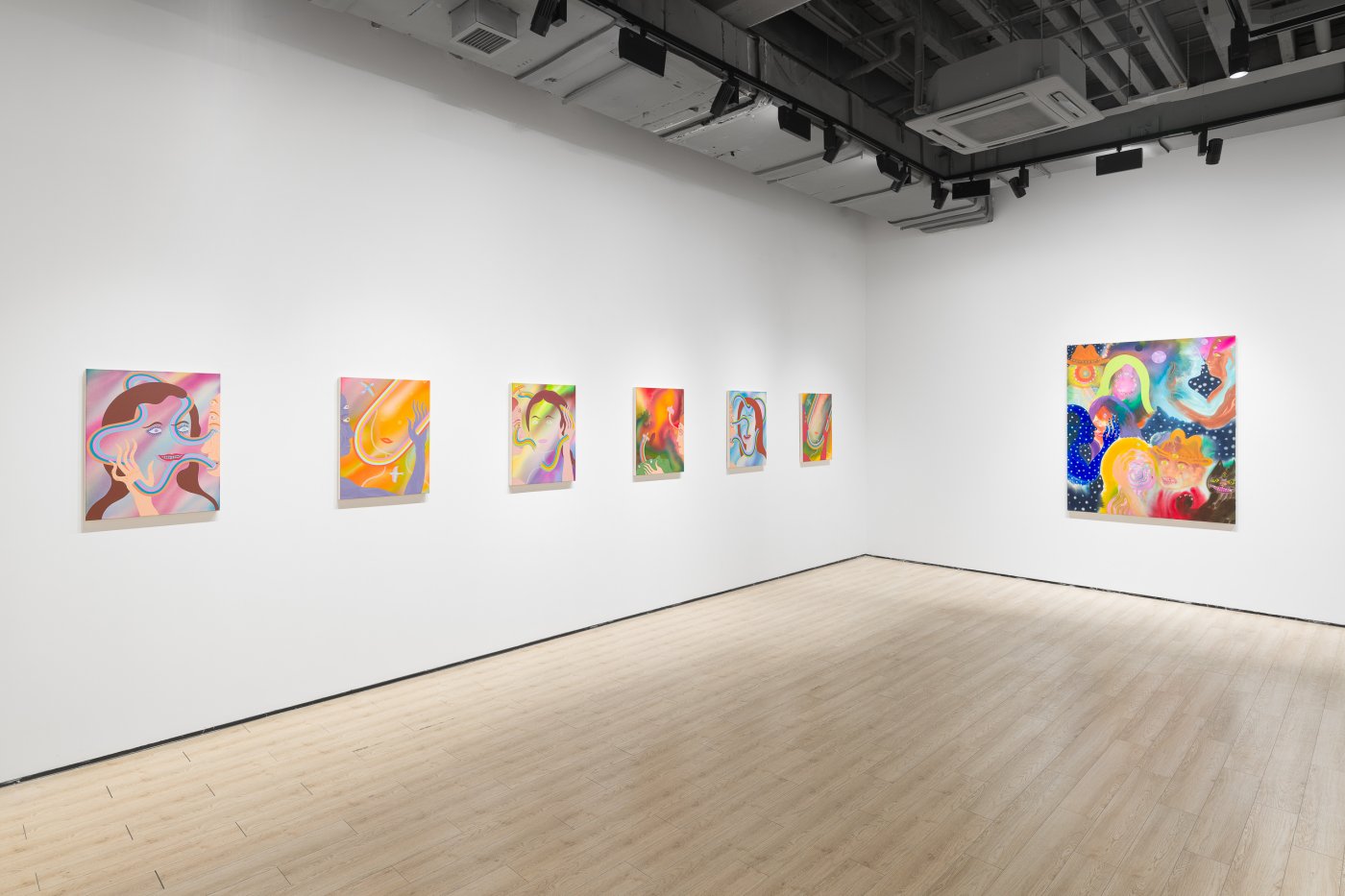 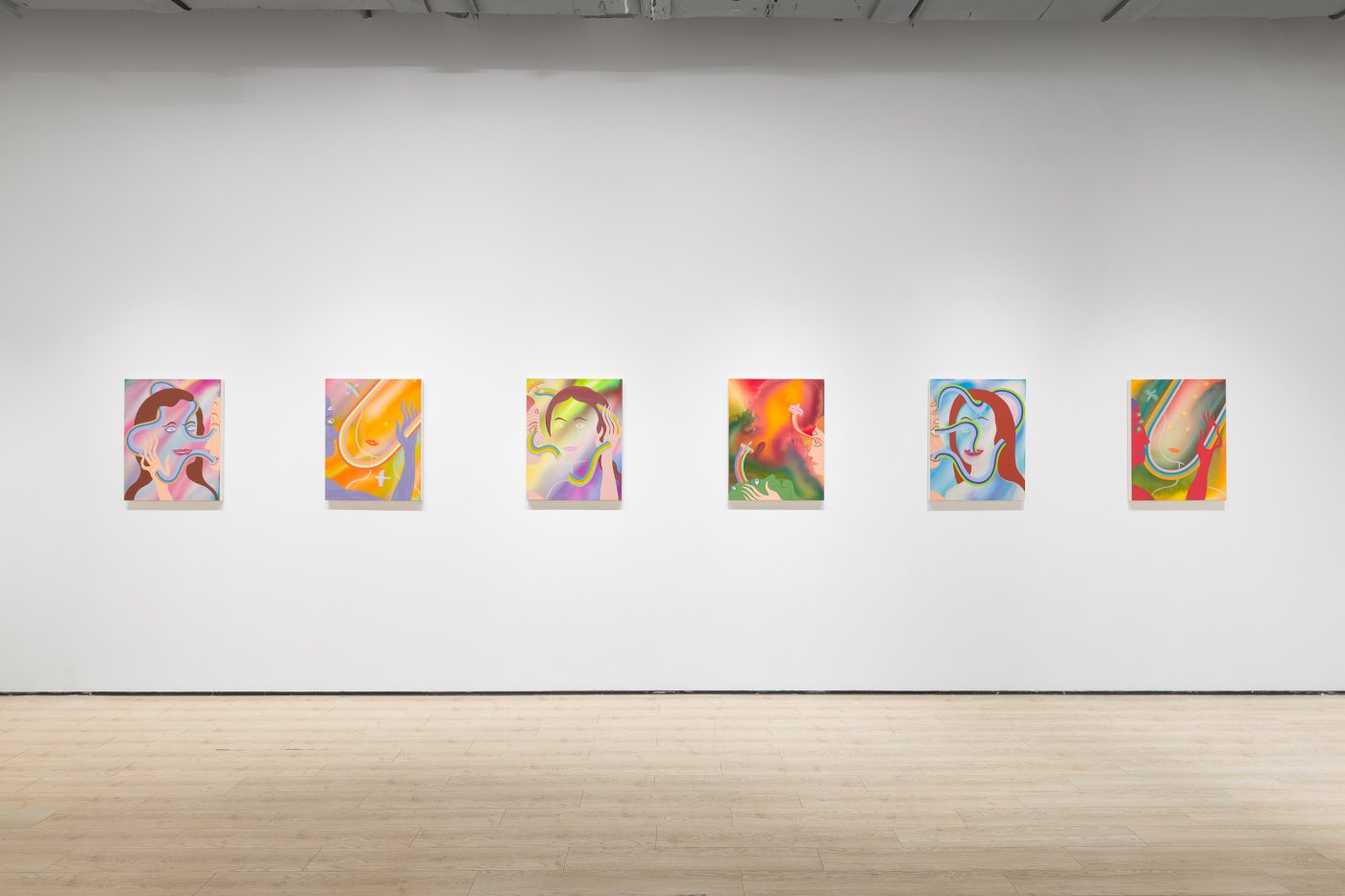 Aaron Johnson’s early interest in the creative risks of experimentation, the delicate balance between control and lack of it, is pivotal to his choices of alternative approaches to painting. In his new series of figurative color field paintings, the NYC-based artist is invested in harnessing the tension between unpredictability and mastership with fluid imagery created using a stain painting technique. Gradually, this opposition between two aspects of something evolved from being the backbone of his technical approach into becoming the conceptual core of the work comprising Day is Night. In this exhibition, Johnson’s psychedelically colorful paintings reveal ethereal figures dissolving into hazes of disembodied color, as otherworldly fluid visualizations of the cosmic interconnectedness of all things.

It’s not rare that artists self-impose a challenge to their practice in an effort to push the boundaries in search of discoveries outside of their standard point of view. For Johnson, this included experimentation with different techniques and materials which eventually landed him in the color field/abstract expressionism realm originally developed by the likes of Frankenthaler or Pollock. Initially, the spontaneity and unpredictability of tinting the raw canvas with washes of color captured his interest alongside the peculiar way of freezing the movement, speed, flow, energy, and gesture. With time, this technique presented itself as perfect for exploring the ideas of perceived duality and for seeking the experience of non-duality, the coexistence of all things. The soak stain technique with thinned acrylics allowed for the depiction of calm but unremitting motion, highlighting the impressions of color, shape, and space, all while exploring the elemental nature of chroma. But unlike the original post-painterly abstraction artists whose works explored the purity of the form, John- son transforms the semi-planned shapes into figurative elements with the additions of suggestive elements. Goofy toothy smiles, wide eyes staring at the viewer, hard edge stripes, or tiny miniature-esque ornamental birds, elevate otherwise random assembling of pulsating blotches into figure-dominated scenes and bring back the context and suggestion of narrative into the mix. The unprimed surfaces end up replete with gestural swathes of rousing colors forming ethereal aura-like visuals made from pigments bleeding into the fibers of the canvas and fading into soft-hued halos. It is this halo that adds a spectral ambiance to otherwise flat imagery transcending them beyond figuration or representation into a fantastical, mystic, or psychedelic sphere.

Active in the middle ground between the post-painterly domain which renounces the traditional tools such as brush or easel, and banking on the relatable presence of the human figure, Johnson is reaching beyond the realm of painting, bringing into play the alchemy of paint while exploring and challenging the medium itself. During such a process, he’s navigating a thin line between abstraction and figuration, choosing between freethinking and predetermined notions, and adorning the images with both ethereal and embodied properties (Ascension, In Her Light, We Are Made of StarDust, all 2022). Slippery, porous, and permeable, these dualities result in alternate forms and states that evidently coexist, in a way reflecting the cosmic notion of the interdependence of the opposites. This transforms the painterly process into a tool for contemplating the relationship of nonduality Vs duality, the concepts of existence as a part of a large whole or existing on one’s own. Similarly to recognizing planets or galaxies within the emptiness of space, the juicy luminosity and radiant blurs of the background reveal the presence of the figure. A figure, that is either drenched in bright sunlight with an ecstatic joy (We’ve Seen the Future, 2022) or is illuminated against the deep-space cosmic darkness by a potent contrast (Star Light, 2022). Within these day and night opposites, the two main types of works are presented – multi-figured compositions which focus on togetherness or reflections on oneness with nature (We’ve Seen the Future, Star Light, Ornithology, Day is Night, Through and Through, We Are Made of StarDust, Deep Space With Black Cat, all 2022) and coupling compositions that connect figures, beings, or selves, across separate dimensions (Red Sonnet, It’s Always You, In The Groove, In Her Light, Holding On, Ablaze, all 2022).

Working with the ethereal, magical cast of aliens, angels, spirits, or astrological entities akin to Greek gods and monsters, with the addition of occasional cowboys and skeletons, the narrative goes beyond our actuality, seeking enlightenment and transcendence from our world. In this light, the process can be seen as a spiritual exercise, a kind of meditation, a search for visions and figures to appear in midst of luminous, amorphous blurs, between the soft edges and gradient stains of splashes of flowing color. And such evident and all-encompassing displays of possible coexistence perennial in different forms directly relate to the interconnectedness and existential correlation between all aspects of Earthly life. These contrasts are in the end the back- bone of our ability to distinguish our opinion and know what we mean as we recognize cold in comparison with hot, pleasure in comparison with pain, and day in comparison with night. Yet however conflicting these opposites might be, our peaceful coexistence and sustainable relationship with the environment depends on accepting a single, infinite, indivisible, yet lucid reality. After all, when we zoom way out and take a cosmological perspective, it’s always day and night simultaneously on Earth, or better, as Johnson suggests, the day IS night.