A.R. Penck: Paintings from the 1980s and Memorial to an Unknown East German Soldier

A.R. Penck: Paintings from the 1980s and Memorial to an Unknown East German Soldier

Michael Werner Gallery, London presents two exhibitions of works by A.R. Penck, one of the most important artists to emerge from Germany during the post-war period. 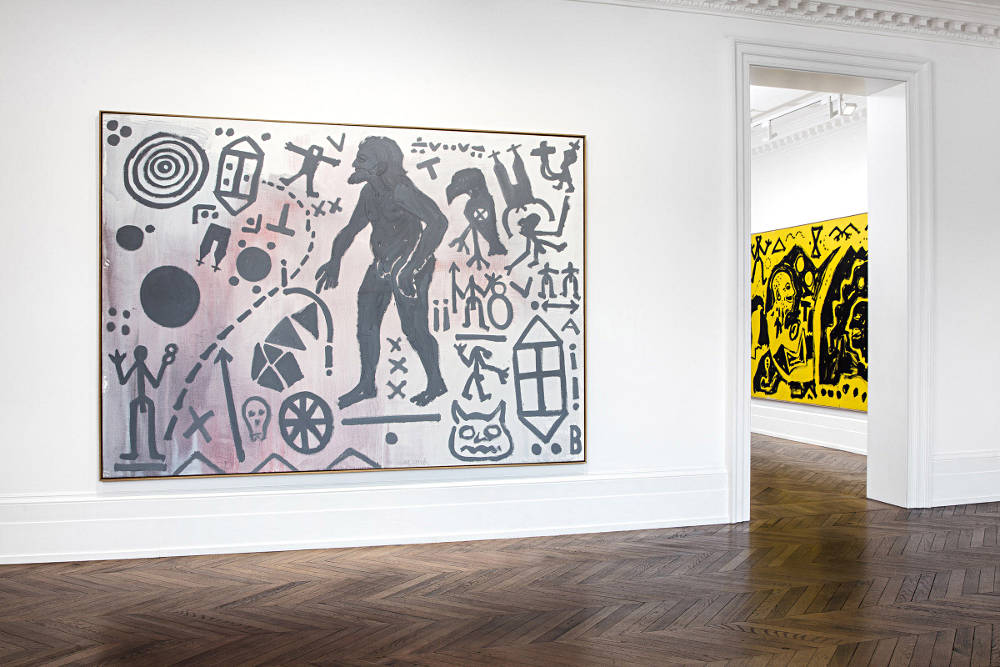 Featuring several large-scale paintings and a monumental sculpture in wood and bronze, these exhibitions represent a key moment in A.R. Penck’s oeuvre.

A.R. Penck’s life’s work was to create a means of visual expression capable of addressing the entire range of social and political issues facing modern man. He invented a profound and vital pictorial language during a period of bleak social and political division and a looming nuclear threat. Abiding interests in science fiction, cybernetics, and information architecture guided his art toward an investigation of the relationships between man and society’s pervasive systems of power, access and control. A.R. Penck’s primal, reductive imagery and improvisatory execution mask the deep seriousness of his investigations.

Following repeated harassment from the authorities and after many attempts to leave East Germany, A.R. Penck finally managed to emigrate to the West in 1980. His paintings post-emigration are characterized by exuberant color, a refreshing openness of pictorial space and a focus on working at a monumental scale. Paintings from the 1980s features a number of major works from this time. A.R. Penck’s renewed interest in sculpture was hastened by access to bronze casting, something unavailable to the artist in East Germany. Whereas in the seventies he began making sculptures with wood, and before that had used perishable materials like cardboard, plastic and aluminium, his access to new materials in the West during the eighties brought sculpture to the fore of his practice, on par with his painting.

“Memorial to an Unknown East German Soldier” is one of A.R. Penck’s most important large-scale sculptures. It was created for the artist’s 1984 exhibition at London’s Tate Gallery and is the artist’s first work in bronze. Writing in the Tate’s exhibition catalogue, curator Richard Calvocoressi described the artist’s inspiration for the work: “In the early seventies [A.R. Penck] was called up for six months service as a reservist. It was, he says, a turning point in his life. Having sworn an oath of allegiance to the state, he came into direct contact for the first time with the military code and with the psychology and technology of warfare, including the use of missiles.” The sculpture is a symbolic representation of the military ideal of standing and fighting, and dying for a cause. Two identical bronze figures, one standing, the other lying across an altar or table, suggest a sacrificial tableau against which is set a large wooden figure and carved head. Further inspiration came to A.R. Penck from the 5,000-year old burial tomb at Newgrange, Ireland. He described his conception of “Memorial to an Unknown East German Soldier” as a ‘positive’ version of that ancient site and an abstract embodiment of man’s passage from life to death.

A.R. Penck is the pseudonym of Ralf Winkler, born in Dresden in 1939. In 1945 he witnessed the firebombing of Dresden, an experience which undoubtedly impacted the course and development of his life and art. At fourteen he studied painting and drawing and at sixteen he made his first application to the art academies in Dresden and East Berlin. Rejected as much for his political views as for his un-academic artistic style, the young artist persisted as an autodidact, exploring painting, sculpture, film, writing and music. In 1968 he adopted the pseudonym A.R. Penck to counter his recurring difficulties with East German authorities, who had all but banned the artist’s works from public exhibition. Thanks to fellow artists including Georg Baselitz, Jörg Immendorff, and Michael Werner, A.R. Penck’s paintings were smuggled westward, where they caused a sensation. A.R. Penck’s first solo museum exhibition occurred in 1971 at Museum Haus Lange, Krefeld; the following year he participated in Documenta 5 (he contributed major works to three subsequent presentations of Documenta). He was awarded the prestigious Will Grohmann Prize of the Academy of Arts in West Berlin in 1975. Upon emigrating to the West in 1980, Penck lived for a time in London before moving to Dublin in 1983. He participated in the groundbreaking exhibitions Zeitgeist (Martin-Gropius-Bau, Berlin, 1982) and New Art (Tate, London, 1983), two major events which helped confirm his status as an important international artist. A.R. Penck’s career spanned more than five decades. He is represented in public and private collections throughout the world. Numerous solo exhibitions worldwide include Kunsthalle Bern; Van Abbemuseum, Eindhoven; Museum Ludwig, Cologne; Gemeentemuseum, The Hague; The Irish Museum of Modern Art, Dublin; Museo Rufino Tamayo, Mexico City; Schirn Kunsthalle, Frankfurt; Musée d’Art Moderne de la Ville de Paris; Fondation Maeght, St. Paul, France; and Fosun Foundation, Shanghai, among many others. A.R. Penck died in 2017.

From the 360º view of A.R. Penck: Paintings from the 1980s and Memorial to an Unknown East German Soldier / @michaelwernergallery London, until Sat 21 April Our VR App ArtPassport is nominated for a Webby! Vote at the link in our bio #360art #360photo #firstlookart #A.R.Penck #MichaelWernerGallery #Mayfair #London #gallery #exhibition #art #contemporaryart #GalleriesNow #ID12024