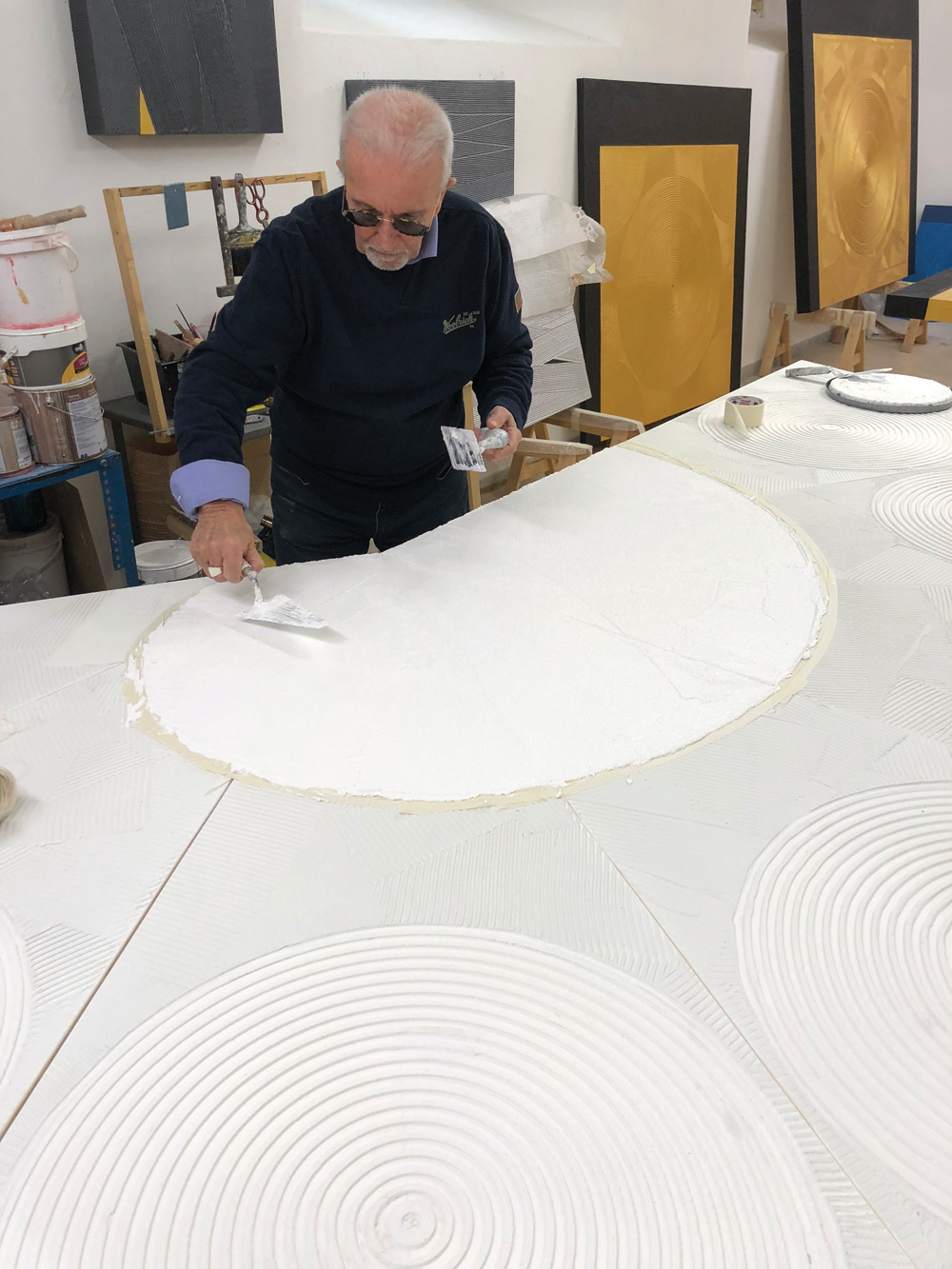 Luigi Mazzoleni: When I saw the installation project for your exhibition, I thought: “Who knows what impact these new works will have on the London public?” When I saw the works installed, I realized that they would be a very strong attraction for Mayfair visitors. Can you tell us about your process for this exhibition?

Gianfranco Zappettini: I thought about this installation carefully by observing the beautiful space of your gallery. The dark grey colour seemed perfect as a background (almost the same colour as your logo!) for the works of the “Con-Centro” series, while for other works it was more appropriate to keep the walls white. I thought of the exhibition as a unique work, composed of many works, to be judged as a whole.

Jose Graci: This exhibition must surely be seen in person. Also, because the overview makes the symbolic meaning of the title more explicit: “The Golden Age”.

“I thought of the exhibition as a unique work,
composed of many works,
to be judged as a whole”

GZ: The Golden Age of the title is not the hope for an era of material well-being. It is the reference to a future age in which the human being will again be in harmony with himself and with the world around him. I don't say it, the great Eastern sacred texts say it. Gold is a symbol of this harmony, of this perfection.

JG: An era in which man will find his inner centre?

GZ: That's right, that “golden mean” is necessary for one's own evolution. In medio stat virtus, the Romans said. The works of the “Con-Centro” series allude to this.

LM: There is a room in the exhibition which I never fail to step in at least once a day. It is the one dedicated to the “la Luce Prima” series. There are no lights aimed at the works, nor even lights that come from the works, but these Wood lamps inserted in the paintings. They do not illuminate directly, but by reflection: they cause objects in the room to be illuminated with reflected light. But the source of that light remains elusive, doesn’t it?

GZ: You hit the spot perfectly. For this series I use Wood's lamp to symbolize the First Light, the Primordial Light, the one that generates the whole manifestation without being perceivable with human senses. It is the creative power that remains invisible, but that we can admire in its visible reflections.

JG: I understand what Luigi means, because I too often come into that room, to have a moment of peace. I find the sound you can hear also very soothing.

GZ: It is the vibration emitted by our planet in its perennial movement in the universe. It is another primordial element that I wanted to include in the installation. If you pay attention, the works look like a Buddhist or Sufi mantra. And it’s just like that: the Earth emits its mantra, and the Buddhist or Sufi mantra is the attempt to harmonize with the cosmos.

“the “Code of the Gods” alludes to a superhuman language, lost by men, bearer of very high knowledge”

JG: The other series on display all have very profound symbolic meanings, yet the public is attracted by the works, almost as if this density of meaning acted like a magnet. And then, the aesthetic value of the works is also part of its force of attraction.

GZ: Yes, gold among its properties also has the attractive power of its beauty and shine. But aesthetics is not the ultimate goal I aim for when I work. I aim for the rightness of a work, its intrinsic balance. If a work is right, then it is also beautiful, and its aesthetic potential comes accordingly.

LM: Returning to the main theme of the exhibition, the Golden Age, I was intrigued by the series of the “Code of the Gods”. In front of me I found these square plates, more or less large, on which lines of a text are written which is incomprehensible to the common spectator. I wondered if the row fragments painted in gold have a meaning to decipher?

GZ: I can't answer you and I'll tell you why. The “Code of the Gods” alludes to a superhuman language, lost by men, bearer of very high knowledge. Let us not forget that in all traditions mankind is able to speak with its Creator: it is able through the prophets - who have a direct dialogue with the superhuman - and it is in the primordial age that follows the Creation, that of the so-called “earthly paradise”, which is precisely that Golden Age you are talking about. The artist has always played the role of the “vate”, poet or prophet, one who opens doors, who sees where mankind still cannot see. He therefore knows higher languages, incomprehensible to the viewer. So, I can't tell you if these works reproduce an underlying text or symbolize a mysterious and ancestral language: it would be like candidly admitting to have superior knowledge, I prefer to leave the viewer with the question pending.

JG: I believe that the volume published by Skira on the occasion of this exhibition also contributes to giving further value to all this. The texts by the curator Martin Holman, the professor of contemporary art Paola Valenti and Klaus Honnef give an appreciable contribution to the understanding of your work. What do you think?

GZ: I am convinced too. Martin understood perfectly the sense of the Golden Age, of my recent works. And for her text Paola Valenti found unpublished documents that I didn't even know, with patience like a real Carthusian.

LM: Then with Klaus Honnef a particular story joins it. Could you explain why?

GZ: It is the history of Analytical Painting. In the seventies Klaus set the theoretical cornerstones of that movement, which linked the research of artists scattered across the continent. The goal was to re-found the language of painting, because after the advent of Arte Povera and Conceptual Art in the 1960s, many still wondered the reason for the existence of painting, a discipline that seemed anachronistic. To Honnef, myself and to a handful of colleagues in Europe, it seemed evident that in reality painting only needed a deep analysis of its basic grammatical elements: what is colour really, what is the support, what is the process ... There were important group exhibitions on this theme, between Italy, Germany, Holland and France, to which Claude Viallat, Gotthard Graubner, Gerhard Richter with his grey monochromes were also invited. It was a underestimated but useful work, because the conditions were created for the great return of figuration to Europe in the late seventies to be accepted without scepticism. Painting cannot die, precisely because it is intrinsic to humankind as is the word. That's why in the last sixty years of my life I have done nothing but paint. Paint and look for myself, and I found that the two coincide. Then we remained friends with Klaus even if at a distance: we didn't see each other in Kassel's “documenta 6” in 1977: he was the curator of the painting section, I was one of the invited artists. This exhibition in London was an opportunity for us to meet again 43 years on – that’s news, isn't it?

Zappettini at work in his studio in 1975
courtesy Mazzoleni, London-Torino

Gianfranco Zappettini: The Golden Age is at Mazzoleni, London until 11 April 2020 - and you can take a virtual tour of the exhibition here