Richard Saltoun is a London-based gallery founded in 2012. The gallery specialises in post-war art with a special emphasis on conceptual, feminist and performance artists who emerged during the 1970s. This was a decade that produced innovative and experimental artists who are now being rediscovered and reassessed.

The gallery has been at the forefront of reintroducing and promoting the work of a number of exceptional artists from the period such as Renate Bertlmann, Helen Chadwick, Bob Law, John Hilliard and Jo Spence. It has held exhibitions on influential artists including Victor Burgin, Henri Chopin, David Hall and Malcolm Le Grice, and has recently restaged the works of commercially lesser-known artists and cultural figures such as Dom Sylvester Houédard, Franciszka Themerson and Edgardo Antonio Vigo. Until relatively recently, many of these innovative and experimental artists were largely ignored by collectors and museums.

Richard Saltoun is also gaining a fast-growing reputation in exhibiting feminist art of the 1970s and has exhibited Helena Almeida, Eleanor Antin, Helen Chadwick, Rose English, VALIE EXPORT, Alexis Hunter, Friedl Kubelka, Gina Pane, Carolee Schneemann, Annegret Soltau, Jo Spence and Marie Yates amongst others.
The gallery retains its commitment to experimental artists of the 60s and 70s and holds 7 to 8 exhibitions per year, many of which are conceived in collaboration with independent external curators with the aim of providing unique and often unexpected perspectives on contemporary art history. 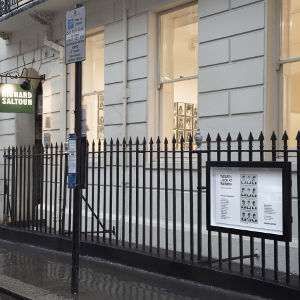