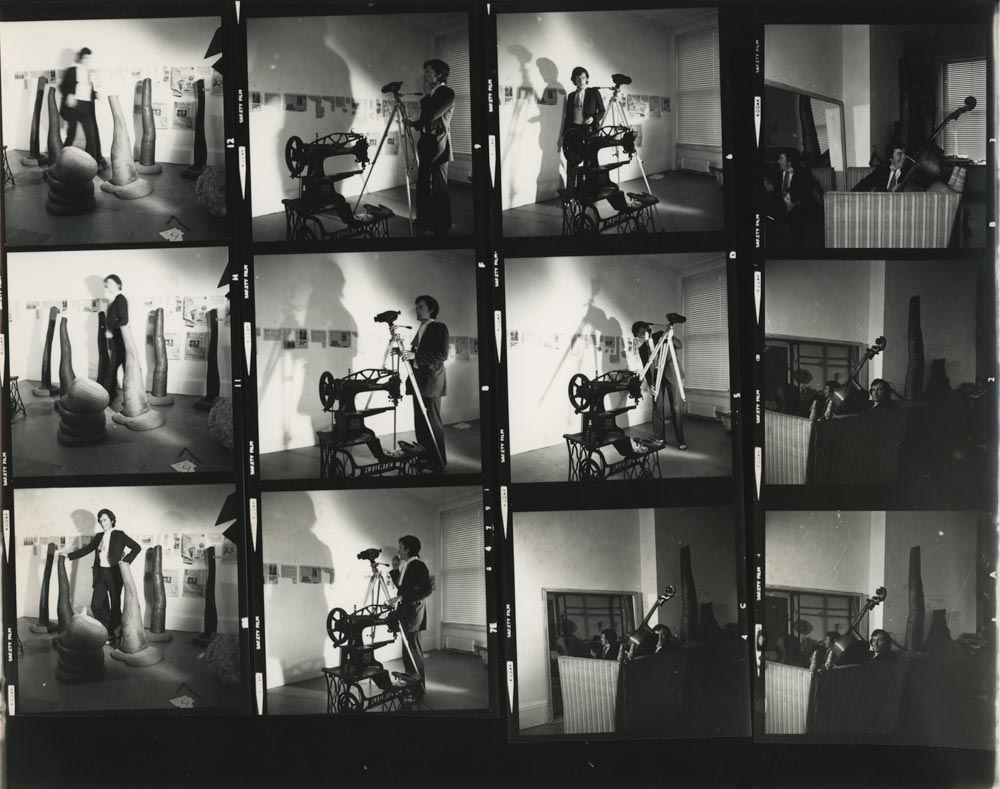 By Flan Flanagan, artist and daughter of Barry Flanagan 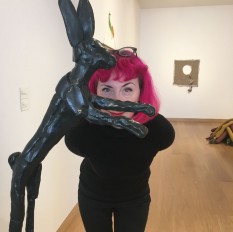 Long gone is my family home and the house in Cliff Road, Camden Town that housed my late father’s studio, yet the moment I find myself surrounded by his work from the 1960’s and 1970’s, currently on show at the Waddington-Custot Gallery, London it immediately fills me with memories and senses evocative of that time, warm and as familiar as the old sofa that was appropriated by my Dad from the sitting room along with his cello to make the piece called ‘60’s Dish’. Presently in the gallery there is a nice little snap shot of him sitting on this sofa.

My Dad’s pieces of work were not just confined to the first floor designated as his studio, they prolificated through the rest of the house and even into the long garden out at the back. He had been experimenting with hazel sticks, hessian sacking and twine, making wild unruly ‘wigwam’ structures that mirrored the cane teepees that trained the broadbeans growing up in the small vegetable patch. Many an hour I played in and around these wigwams that eventually became a collection called ‘Untitled ’70’.

Inside the house along the hallways and stairway landings, various stretched canvases with cutout shapes were propped up against the brown wrapping paper covered walls (brown paper was cheap and my parents’ unique solution to conventional wallpaper). Behind these leaning expanses of canvas, Jenny, our slightly pissed off tabby cat hid, lying in wait for any bare-ankled feet to pass by. She would strike with force, a furious ball of fur and malevolent claws. It was a fearful challenge to predict which hall or landing she’d be waiting on in-hiding and I never seemed able to run past quick enough or to outwit her ‘hunting’.

In the studio there stood a vast heavy iron ‘Singer’ treadle sewing machine on which my Dad would work the foot plate and once it was in good rhythm he would sew long seams on canvas or hessian cloth, creating long tubes, such as in the piece ‘Heap ’67’. The machine was originally used for sewing sails so he told me. Long floppy flat tubes of cloth would be filled with ever-moving, sifting sand but, once filled, grain upon grain settled into the contours and, rounding out the form, they would take on surprising solidity in their canvas skins, particularly those that met with the catalytic effect of resin. That is it for me, that back-of-the-eye-thumping reek of curing resin softened with the warm musty smell of the hessian and a snifter of tobacco. This is my olfactory memory of my Dad, his studio and my childhood and if I was really lucky the smell of sizzling hot, butter-browning garlic would signal that Dad was stove-side making ‘bubble & squeak’ accompanied by precious morsels of black pudding, a favorite of mine still to this day.

Sand played a significant part in our lives, sand was always in the studio and of course in its natural environment such as Cornwall where we would visit his parents (my grandparents) Bill and Monica, his sister Pat and his niece Sarah. We got to make and play sand-castles on a truly gargantuan scale! Memorably on Holywell Beach, North Cornwall, nestled near by the sand dunes Dad filled an enormous sack with 3 tons of sand. ‘Easter Bag ‘67’ was about 10 foot high but it felt as big as a house to a little kid. My cousin Sarah and I were placed on top of it, we really were Kings of the Castle!

Around the same time as ‘Easter Bag ‘67’ he made ‘Hole in the Sea ’67’. I like the idea that sculpture can occupy a space just as well as it can take an element away and leave a space. From the waves of the sea to the waving long grass on Hampstead Heath where many artist friends gathered for picnics in the same grass as ‘Grass 1’ , ‘Grass 2’ and ‘Grass 3’, 1967. I have a particular fondness for these photo screen prints that were hanging up at home for many years.

His stone carving usually took place outside. The marble dust, white and soft, produced a peculiar smell unto itself, cool, not just because of the association that stone is cold to the touch, but in the way a cucumber’s taste and smell gives a cool and gentle impression. I love the squished sensual look of the stone sculptures such as ‘Untitled (carving no.1) ‘83’, and how he made a material that is hard appear soft and malleable, full of plasticity, then the flip of making the soft and fluid materials rigid and solid. Seeing these sculptures together I enjoy the chatter of their silent conversation.

As the years have passed the sculptures no longer smell of heady resin, sand and hessian and my Dad is no longer there sandaled, tweed-suited with a dusting of white marble. I miss that.

Barry Flanagan: Animal, Vegetable, Mineral is at Waddington Custot Galleries until Saturday 16 May 2016. You can see the exhibition here